Eight months ago, a freelance reporter asked for my views on the emerging argument over Honolulu’s proposed rail transit line, which would stretch most of the length of the populated southern shore, from west of Pearl Harbor through downtown to Ala Moana Center on the edge of Waikiki.  The Transport Politic has covered the background here and here and here.  A good blog on the subject is here. 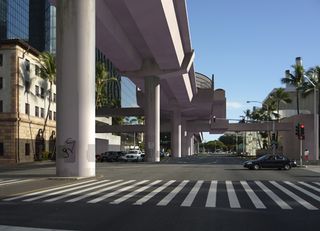 A mostly-elevated driverless metro, quite similar to Vancouver’s SkyTrain, is the preferred alternative.  Unlike SkyTrain, though, it would not go underground downtown.  Instead, a substantial elevated structure is proposed, one that would definitely have some visual impact, as this computer generated image indicates.

Late in the process, long after this option had been selected and the environmental work done, there was a revolt.  One key player in the revolt was the local chapter of the American Institute of Architects, who have devoted a section of their website to attacking the project.  They propose a light rail solution where parts of the line could run at grade, and which would go through downtown Honolulu on-street at low speeds with frequent stops, much like the downtown light rail segments in Portland, San Diego, Denver, and many other cities.  Last year, a study by transit consultant Philip Craig came out arguing for this option.

If you care about the eternal struggle for planning power between the architecture and transport professions, you’ll love this dispute.  It’s perfectly designed to heighten the contrast between transportation thinking and urban-design thinking, and to confirm the worst stereotypes each holds of the other.  The transportation solution — a mostly elevated driverless metro — is fast, frequent, and reliable, but it does require a pretty impactful elevated structure (presumably because the best solution, undergrounding it through downtown, is too expensive).  The urban design solution, surface light rail, is beautiful downtown — redolent of Portland, in fact — but unfortuately it’s also slow, less frequent, and less reliable.

The most striking thing about the debate, for me, is that it’s been discussed on both sides as though the main payoff of the elevated line is speed, rather than frequency, an example of the “travel time” fallacy I discussed here.

Speed is certainly a big difference: end-to-end travel times on the surface light line are about 20-30% longer than on the elevated line, and any modeller will tell you that’s enough to make a difference in ridership.  Moreover, the low speed is concentrated in the slow downtown segment, so medium-length trips that have to go through that segment could be more than 30% longer.

But the frequency difference is even more profound.  Driverless metros are easy to run frequently all the time, even late in the evening, while surface light rail, which requires drivers, will always be under financial pressure to run the minimum possible amount of service at low-demand times.  I guarantee that if the surface light rail is built, it will never run better than every 15 minutes at 11:00 PM, but the driverless metro is easy to run every 5-6 minutes even when demand is low, because driverless metros sever the link between frequency and operating cost.

Reliability will also unquestionably be superior on the elevated line, because it will have no interference from other traffic.  Surface light rail, even if separated from traffic, still has to interact with it at intersections.  These cause unpredictable delay as well as a much higher rate of crashes.  Browsing Mr. Craig’s report, though, I noticed alarming suggestions that the line could mix with car traffic at certain points.  It even suggests operating in the curb lane of some streets, exposing the line to constant interference with right-turning traffic, and all the crash opportunities that this will present.

(At one point, the Portland Streetcar’s two-year construction time is cited as a reason light rail can be fast.  This should be a screaming red flag, because it implies a common and dangerous categorical confusion between streetcar and light rail.  The Portland Streetcar is a fine example of a local-stop, low-speed circulator, but it is, by design, slow and unreliable.  It was also built on the cheap with more opportunity for disruption:  Proper surface light rail construction requires relocating utilities from under the line so that the line doesn’t have to be shut down to access them later.  The Portland Streetcar was built by digging barely two feet below the pavement, leaving all the utilities in place.)

Finally, the AIA suggestion of putting light rail through downtown’s current “transit mall,” Hotel Street, seems to assume that buses somehow just get out of the way.  There’s no thought on what the light rail does to the bus system, how the bus system would be revised to work with it, and what impacts this would have.  This is an example of an almost universal fallacy in thinking about rail transit outside the transit profession: that somehow, rail just makes buses disappear.

The truth is more complex and interesting.  Rail replaces some buses but never all of them.  Major bus corridors still need to run into the city, and need to be accommodated there.  Even with light rail on the Portland transit mall, for example, buses are by far the majority of vehicles there, and the great design challenge of that street was how to integrate the light rail and bus services without letting them get in each other’s way.  It’s not an easy problem.  There are many solutions, but all of them have enough impacts that you have to think about this when you’re proposing your rail line, not just assume that bus people will figure it out later.

None of this is an endorsement of the current elevated plan.  I have questions about it, too.  One of the few transportation advantages of the surface light rail option is that it’s easy to imagine extending it into Waikiki, Honolulu’s premier tourism district, in the future.  (The line as now proposed ends at Ala Moana Center, within walking distance of Waikiki but not quite there.)  I have a lot more trouble imagining extending an elevated line into such a tourist-intensive and view-sensitive area.

Finally, as a planner, I have to share the exasperation of everyone at the City of Honolulu who brought this project through all its necessary stages, including extensive public consultation, only to encounter this objection at the eleventh hour.  The late-breaking nature of the objection is a major strike against it, because it implies substantial delay to a project that was close to moving ahead.  Claims that the surface light rail will be cheaper than the elevated line may well turn out to be true, but you don’t really know this until you’ve explored all the consequences of your project (such as where to put the buses!) and added the costs for all those effects and mitigations.  That’s what the environmental planning process is for, and only the elevated line has been through that process.

Before you comment, please note:  My purpose here is to note some of the interesting large themes raised by this dispute, not to wade into the dispute itself.  I am quite intentionally expressing no view on the politics surrounding the line, or on the funding challenges.  I do not have a view on which option is best.  In fact, the trade off between efficiency and aesthetics is one of those value-judgment decisions that don’t have a technical answer.  In a sense, nobody outside of Honolulu should have an opinion, because it’s all about what kind of city they want, and that has to be up to them.

Quote of the Week
Applying Highway Concepts to Transit

27 Responses to Honolulu: Grand Themes from the Rail Transit Wars

You are here: Home › Honolulu: Grand Themes from the Rail Transit Wars