Posted on May 3, 2010 in Basics, Las Vegas, Philosophy, San Francisco

Commenter Mike recently laid out a nice explanation of the line numbering system in Aachen, Germany, and then asked, fatefully:

How do professionals assign line numbers?

The answer is:  Much as geeky amateurs do, when drawing imaginary networks.  It’s a process of (1) imagining beautiful systems of order, and (2) willing them in to being.  Unfortunately, real-world professionals have to proceed through the additional steps of (3) clashing with proponents of competing systems, (4) enduring the derision and sabotage of anarchists, and finally (5) resigning to a messy outcome where only traces of beauty remain, visible “between the lines” so to speak, for those still capable of enchantment.

All this is visible, for example, in a slice of the bus network in San Francisco: 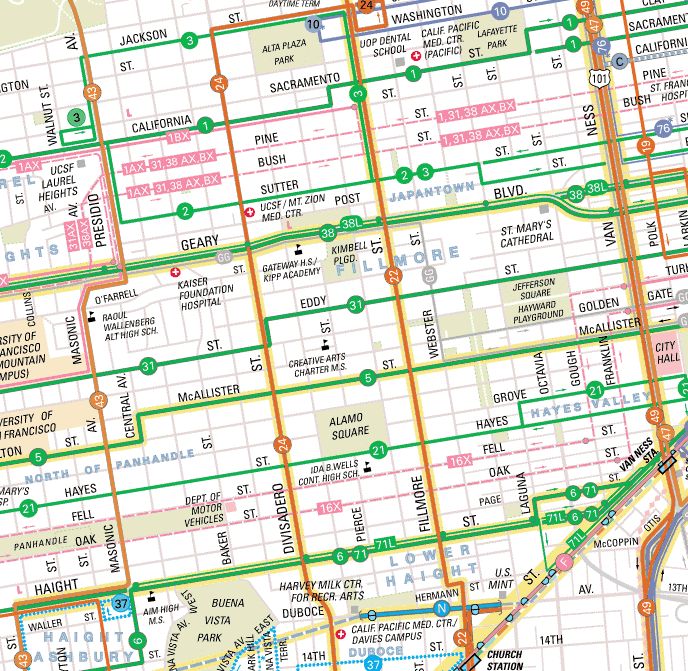 Look at the numbers of the east-west lines, from top to bottom, focusing on the right part of the image between Fillmore and Van Ness avenues, where the pattern is clearest.  The sequence is:  1, 2, 3, 38, 38L, 31, 5, 21, 6, 71.  Here, obviously, is a kind of Parthenon of line numbering, a ruined but still recognizable system of order:  At one time, starting with Line 1 and proceeding south, there was a series of lines numbered 1, 2, 3, 4, 5, 6, 7, in more-or-less geographical order.  The numbers 31, 38 and 71 were added later, by those anarchists I mentioned.   (UPDATE 2015: With Neoclassical visionaries back in charge, line 71 has been renumbered back to 7, restoring a bit of the previous order.)

The number 21 is a trace of a different system of order.  Originally, the one-digit numbers referred to lines that flow into downtown, mostly along Market St., while the 20-series referred to lines that cross Market, generally running perpendicular to the first group.  The north-south lines 22 and 24 in this image still tell that story, and as I understand it, the 21 used to flow across Market, though it was revised long ago to flow into Market and thus ruin the beautiful pattern.

Line numbering, in short, is really a dialogue between three impulses:

Of course, there are really four or more characters in the dialogue, because there’s usually more than one Visionary, and Visionaries, by their nature, prefer their own visions to other people’s.

The most common vision of line numbering is to categorize lines by location.  In small networks of lines all radiating from a point, it’s common to see numbers assigned sequentially going around the circle.  In Portland, for example, these radial lines used to be numbered clockwise starting with North Portland, and very astute eyes can still see traces of that largely ruined pattern.

I started out life happy to number lines in geographical order, but over time I’ve realized that people need to understand what kind of service a line provides even more than they need to know where it goes.  So I generally advocate line numbering systems that reflect crucial distinctions in either

For example, I always recommend a numbering scheme for peak-only commuter express services that distinguishes them from any all-day services in the same area, because peak service tends to be more complex than all-day service and can therefore tend to obscure it, whether on a map or on a numerical list of lines.

But above all, line numbering is a lesson in the impermanence of all things, and especially of visions of the perfectly ordered city.