It’s what I deserved, I suppose, for having written so much about how cul-de-sacs (at all scales, not just suburban) make attractive public transit impossible.  My hotel here, the Elizabeth, turns out to be at the uphill end of a 700m long cul-de-sac.  The entire thing is lined with 20-story buildings, mostly residential, that efficient public transit will never reach. 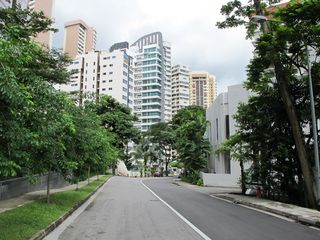 From my hotel at the end of the cul-de-sac, I can see the end of another cul-de-sac that comes from the opposite direction.  To get there, you just climb over a green fence that has a little desultory barbed wire on top — or sneak through a hotel’s gate, if it’s open. 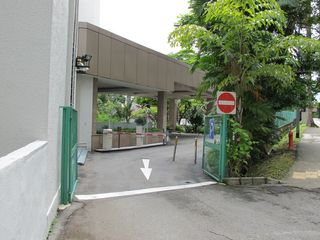 The long walk up Mount Elizabeth Road from the nearest transit stop also offers some fine examples in the endless struggle between pedestrians, drainage, and trees.  (Cars, oddly enough, never seem endangered by these battles.) 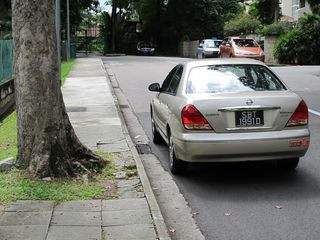 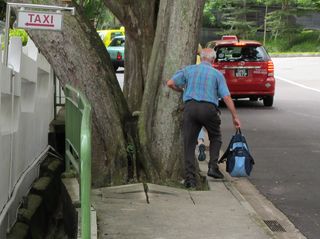 Pretty much the same struggle that we see all over the developed world, except that there’s a drainage channel on the left of these images, next to the white wall.  (Drainage is serious business in this monsoon-prone tropical city.  Just last week a single plugged drain caused the flooding of Orchard Road and the lower levels of high-end shopping centers there — mostly food courts and the like.)

I’m curious to know if anybody in Singapore is even inventorying these pedestrian-vs-tree situations, and identifying obvious solutions to them — such as, say, extend the sidewalk into the street, at the expense of a parking space.

Singapore is spectacular, safe, pleasant for the most part.  The density drives huge transit ridership, on both the sleek air-conditioned metro and buses.  More on all that soon.

These odd lapses in pedestrian infrastructure are nothing like the challenges pedestrians face in developing-world countries like India, where
they are often tracing a moving-front line between traffic lanes and roadside commerce.

But clearly, as in many cities of similar vintage, key parts of Singapore’s density were built at a time when nobody was thinking of pedestrians — a world-view that I struggle to grasp.  I find it easier to imagine life in ancient Greece or pre-contact Native America than life in 1970 as a planner who thinks we can build vast forests of towers everywhere, and still assume that everyone will drive cars.

Yet Another Reason to Hire Literature Students
Now, Anyone Can Monitor Reliability