Hello from a hotel room with a great view of Amsterdam’s Central railway station, and of the intricate tangle of tram loops, canals, roadways, taxi queues, bike lanes, and subway construction sites that make up Stationsplein (“station square”).  The Netherlands triumphed over Uruguay in the World Cup semifinal about fifteen minutes ago.

There aren’t many cars in Amsterdam, because the city simply doesn’t make room for them.  But every car in my field of vision, maybe 20 or so on all sides of the square, is honking.  (It is the sort of moment when you wonder why carmakers couldn’t tune all horns to an agreed set of standard pitches, so that when everyone honks at once we’d at least get a pleasing chord.)  I can also hear a lot of happy shouting, a few things that sound like brass instruments, and the occasional vuvuzela.

What I don’t see is anything unusual in the traffic itself.  People don’t seem to be getting in cars just to drive around and honk.  If they’re in their cars, they’re honking, but they seem to be driving safely and respecting the great masses of pedestrians flowing from the city into the station. 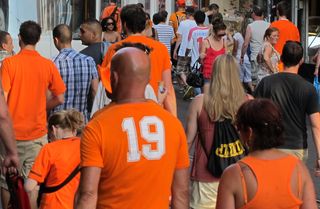 At such moments it’s helpful that the national team’s patriotic color is the bright orange usually seen on crossing-guard flags and freeway construction cones, so the fans are easy to see at night.

The team wears the same orange on the field, of course, and since it commonly means “slow down, look out” in other international contexts, I wonder if it has some subliminal retarding effect on the attacks of Holland’s adversaries.  Perhaps even a great striker like Uruguay’s Diego Forlán, setting up a make-or-break kick on goal, loses a crucial 0.4% of his attention to an unconscious fear that he may be about to run over schoolchildren crossing the road.

Finally, a fun detail from the Guardian’s live coverage:

“Paul, I must protest against your description of our [Dutch] national anthem as a ‘grim dirge’,” bellows Frank Futselaar. “Not only is it the oldest national anthem in the world, its contents are also appealing in that they barely mention the Dutch at all. It was a revolutionary song during the Dutch revolt against the Spanish empire and mentions both how our founding father was a German and how much we respect the king of Spain. This could be a bit of an issue if we make it to the final.”

They’ve made it.  Couldn’t happen to nicer people, or to people easier to see in the dark.

7 Responses to Amsterdam: Victory is Orange

You are here: Home › Amsterdam: Victory is Orange