Yes, I’m in Amsterdam, and the Netherlands scored a big win in the World Cup quarter-finals yesterday.  I was at Rembrandtplein, but I’m sure it looked like this all over the city. 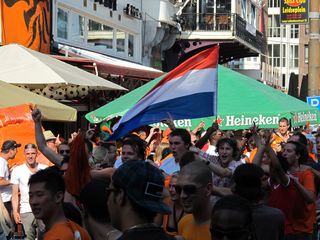 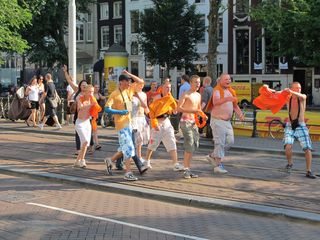 In that second photo, the gentleman on the far right appears to be taking the posture of a matador, and given where he’s standing, the only dangerous beast that he could be tempting would be an oncoming tram.

Yes, there’s a transit angle on the festivities.  As soon as they broke out, I headed over to Leidsestraat, a narrow pedestrian+tram street lined with tourist-oriented shopping.  I have to say things were pretty much as usual, plus some noise and funny hats. 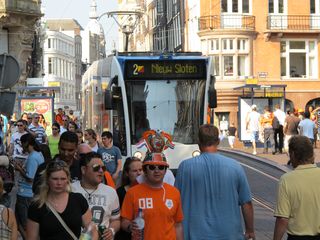 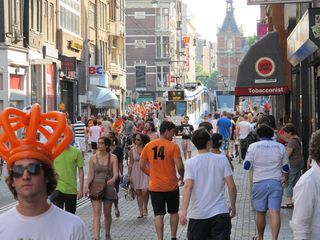 If you think you can imagine how slow this would be for the tram, it’s a little slower than that.  Leidsestraat has heavy tram volumes — every 3 minutes at peak times — and yet it’s built with a series of single-track segments.  There’s double-track at the designated passenger stops, but between these there are short bits of single track.  Trams have to wait at the passenger stop until the single-track segment ahead of them is clear, before they can proceed.  So some of what looks like trams stuck behind peds is really trams waiting for the clearance to enter the single track segment. 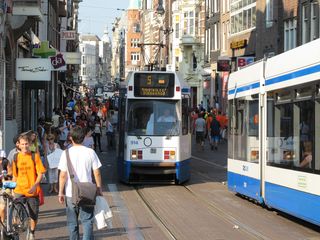 But in either case, this segment is seriously slow, I’m guessing an average of no more than 6 km/h (4 mph).  (UPDATE: Commenter Pete(UK) keeps me honest: it’s scheduled at about 9 km/h, still pretty slow.)  This matters, because these are tram lines that extend well out into the south and west of the city.  Since these trams enter/leave the urban core via this Leidsestraat segment, this is probably their peak load point — the point on the line where they are at their fullest.  A lot of people making fairly long trips have to ride through this segment, where the tram runs so slowly that it looks like it’s trying to entertain the tourists (and World Cup revellers) rather than get anywhere. 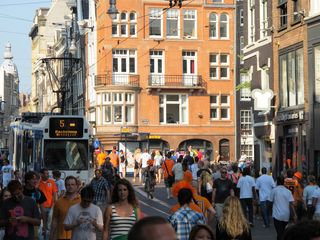 But it’s not all that unreliable.  Trams ring their bells a lot, pedestrians get out of the way, and nobody gets hurt.  The big trams also move with a certain confidence.  They’re not inching their way forward, as though asking for permission at every moment.  They glide slowly but firmly from one stop to another.  I’m sure accidents do happen, and they’re probably pretty grim when they do, but the tram drivers manage not to seem intimidated by the high risk of hitting someone.  Even at their slow speed, the pedestrians are packed so closely around the tram that there would be no chance for reaction time if someone fell in front of one.

The only time it really falls apart is when a vehicle is present, in this case a police car. 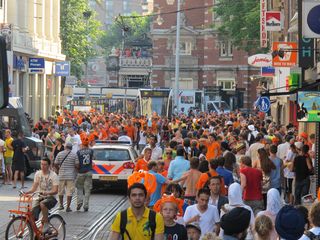 There are also problems when a car is crossing the mall on an intersecting street, needs to yield to peds on the far side, and thus gets stuck crossing the tram tracks.  The many cyclists, most using common sense but not observing traffic laws, add a further frisson.

Leidsestraat is the sort of place urbanists have in mind when they go on about how easily trams mix with pedestrians once you get the cars and buses out of the way.  And I have to say that it works on that score.  But it’s really slow. 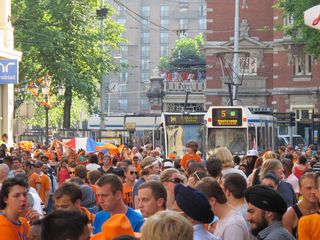 You are here: Home › Amsterdam: Drunken Revelers Dancing with Trams