Posted on July 1, 2010 in Architecture, Singapore

One of this blog’s earliest fans was Paul Barter, a transport policy scholar based at the National University of Singapore.  Paul’s blog, Reinventing Urban Transport, is always worth a look.

Paul and I met for dinner in Singapore last week, a long rambling evening that ended in an outdoor Islamic (no alcohol) cafe, where we watched the Germany vs. England World Cup game amid a crowd who all seemed to have surprisingly strong feelings for one side of the other.  (Perhaps, given colonial history, this boiled down to strong feelings for or against the British.)  We started with a walking tour of a Singapore that most tourists won’t see, but that covers a huge percentage of the island: the regular, repetitive, but efficient world of the Housing Development Board, the single government agency that provides housing for a majority of Singaporeans.

Paul told me to meet him at Ang Mo Kio station on Singapore’s rail rapid transit network, the MRT: 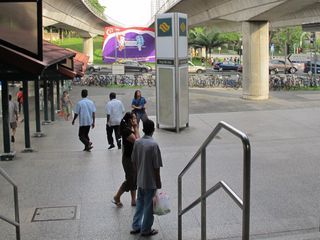 Most of the rail rapid transit is elevated outside the CBD, so this is a typical station environment, constrained in its urban potential by the overhead structure.  Note the solid mass of bicycles chained to the fence in the distance.

Singapore is still debating the role of the bicycle.  Paul tells me that cycling on pedestrian paths is illegal but tolerated, while riding in the street is legal but looks, to me, pretty scary.  When Paul and others suggest ways to make cycling safer, they get responses along the lines of:  “Cycling will never be popular in Singapore; it’s just too hot and humid.”  There’s an odd disconnect here, as the number of bicycles locked to railings at rapid transit stations indicates some demand, and this would seem to suggest some government interest in the safety of those people, regardless of whether bicycles are officially popular.  As for humidity, Brisbane shares Singapore’s climate for half the year, and in the core parts of Brisbane where there is good cycling infrastructure, cycling volumes are intense.

Paul then led me to the bus interchange for Ang Mo Kio station, which is across the street from the rail station but connected by pedestrian underpass.  It’s a standard enclosed facility with sliding doors that open only when a bus is there.  It’s huge, bigger than the rail transit station, with a long chain of berths receding into the distance. 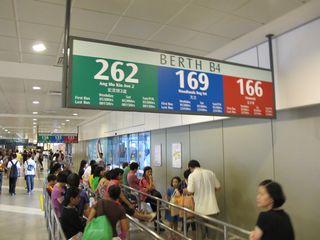 The interchange gives out onto a typical community commercial area. 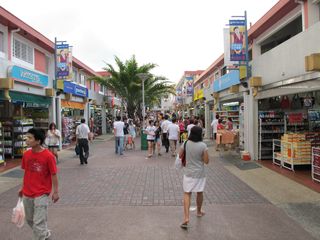 Which leads, in turn, to truly vast quantities of this … 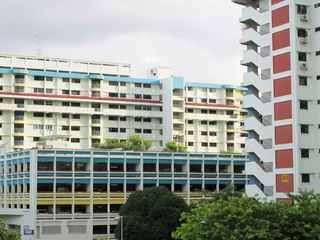 The low building in front is a parking structure.  This high density has a surprising amount of parking given the transit options and the generally high cost of driving.  Paul said that the total number of cars is capped in Singapore, by requiring a permit to own a car and capping the number of permits.  Motoring costs are also relatively “unbundled.”  Paul assured me that the parking for these housing blocks is never just lumped into the cost of housing, as it would be in North American or Austrlasian cities, but must be leased separately.

Still, it’s a lot of parking, a lot of cars, and thus a lot of emphasis on big, fast streets: 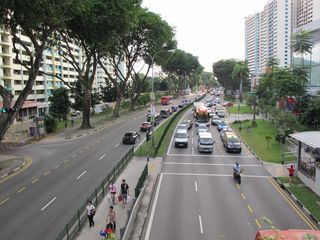 Our walk took us under the viaduct of the MTR rail transit system, and while it’s not Berlin’s Stadtbahn, they have tried to make the space useful, as a skateboarding area among other things. 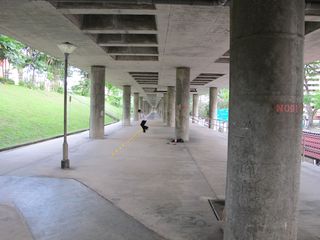 Considerable effort goes into providing completely weather protected pedestrian routes, an effect that produces a repeating pattern of small structures that are vaguely Chinese-looking in their composition: 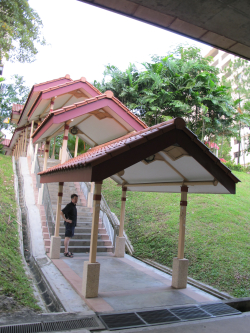 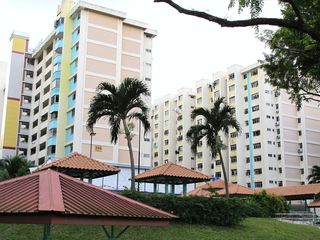 These towers also have an equivalent of the small corner shop, usually on the ground floor. 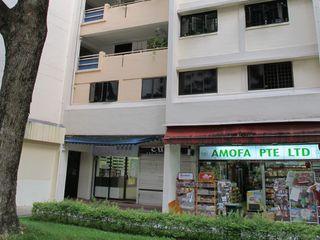 These massed housing landscapes are likely to be distressing to a lot of Western eyes, reminiscent, perhaps, of European suburbs that are often considered slums.  So it’s interesting to see the same architecture used to create a prosperous environment, with many touches that show a clear intention to make a humane and attractive place.

In the end, I’m not Singaporean, so it doesn’t much matter whether I like it.  The Housing Development Board is Singapore’s housing provider not just for the poor but for much of the middle class.   Generations of many families have known no other form of housing.  It’s home.  And it certainly packs the trains.

5 Responses to Singapore: A Walk with Paul Barter

You are here: Home › Singapore: A Walk with Paul Barter