Posted on July 1, 2010 in Navigation, Philosophy

The online communications advisor for TransLink in Vancouver, Jhenifer Pabliano, has asked me to answer a few questions, for her to publish in TransLink’s blog, the Buzzer.  I figure I might as well post the responses here.

1.  How did you get interested in transit in the first place?

From a very early age, I had a profound and (to some) disturbing obsession with geography.  By age 6 I was drawing maps of imaginary cities.  When we moved to Portland when I was 8, my parents papered my room with state and province maps.  (Gas stations used to give these away for free, back in the days when they checked your oil for free, too.)  When I was about 12, I started riding Portland’s Tri-Met system to school, a trip that involved a transfer downtown.  Within a few years I had most of the network memorized, along with most of the geography of the city.  It was just a thing my brain did naturally, and still does.

You don’t have to have this obsession to do great work in transit.  But some brains do memorize geography and are able to solve problems in geographical space.  (Such people are always spatial navigators, capable of visualizing maps but often helpless when confronted with narrative directions.)  When the time comes to rethink a complex and interdependent network, you do need one or more of those people at the table.

2.  What makes transit so interesting for you today?

I spent my 20s doing a PhD in an arts/literature field, and today I’m beginning to reintegrate the geographical and numerical thinking that a transit planner does with the humanistic thinking that I did as a graduate student.  So for example, I’m much more interested in language than the average transit planner, because humanities training is all about noticing what’s going on inside of words.

One aphorism I often use is from the philosopher P. F. Strawson:  “What we can’t say, we can’t think.”  If we don’t have a word for something, we can’t discuss it or even form clear ideas about it.  Even if we do have a word for what we want to say, it may have emotional resonances that don’t serve our purpose.

One mentor of mine, a manager of network planning for a major agency, refused to use the word bus for this reason.  He though bus sounded too plain and uninspiring, so he always used coach, which sounded more dignified to him.  He lost that battle: coach now sounds so archaic that it would be self-ridiculing to use it, but bus still smells bad as a word.  The challenge of premium bus services like Bus Rapid Transit is not just to rehabilitate the bus as a vehicle, but also to rehabilitate (or perhaps replace) bus as a word.  Both dimensions of the struggle are equally essential.

Finally, I’m increasingly intrigued at the way different disciplines think about transit.  The recent debates with Professor Patrick Condon on my blog are a good place to observe how the urban-design world-view differs from that of the transport planner, which invites me to wonder what it would take to construct a real conversation between these crucial aspects of urban expertise.

3.   Through your discussions, what do you ultimately hope to share about transit? What do you see about the field that we non-planners don’t see?

I see that there’s a core set of geometric facts about transit that most people haven’t thought about, but that largely govern transit’s success or failure.  These are the subject of my Basics series of posts, and include things like the necessity of transferring, the role of grids, and the nature of land use patterns that work well or badly with transit.  Recognizing that these are facts of geometry can be liberating, because it helps take the heat out of some debates.

For example, it’s common to hear people in outer suburban areas, such as the South of Fraser in your region, complain that they get much less transit service than core cities like Vancouver.  But there’s a clear geometric explanation for why that is, related to the geometry of density, and it also explains why the same issue comes up in virtually every urban area.  If intelligent methane-breathing aliens on Jupiter have some sort of scheduled conveyance that takes them from one cloud to another in their vast floating cities, they are probably dealing with the same geometry problem, and having the same debate.


4.  Where do you think the future of transit is headed? What type of progress do you hope to see?

My personal goals are:

There are also technological changes that I want to see, but they’re those that serve the goals of practical urban mobility.  Above all, we need a battery-driven electric bus, with enough reliability to become the standard bus product in our cities.  You can plug it in at the end of the line.  A lot of the negative perceptions of buses are about internal combustion.

5.  Just for fun: What’s the most memorable experience on transit you’ve ever had? 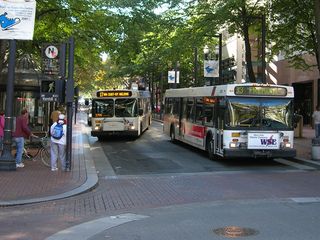 Well, the most vivid memories are often those from childhood.  When the Portland transit mall opened in 1977, I was 15 and saw it every day on my commute to school.  Now there was one place where you could stand and see most of the buses in the city pass by, their overhead signs advertising the various places that they go.  Part of why I learned the city’s geography in such detail was in order to better visualize where each bus was going.  Because for whatever reason, I needed to feel that connection.

I remember that because it’s the same excitement that many of us have felt in an airport, or a great European train station, when we see a departure board showing all the exotic places to which people are departing.   In the entire passenger transport experience, this is the moment that offers the most visceral sensation of freedom — look at all the places I could go, from right here! — and as the car industry can tell you, creating a sensation of freedom is the key to success.   Urbanists need to think more about this sensation, because it could help them describe transit mobility in a way that connects it to things that we all value.  Things like freedom, and joy.

You are here: Home › Authorial Narcissism Alert: The Buzzer Interview