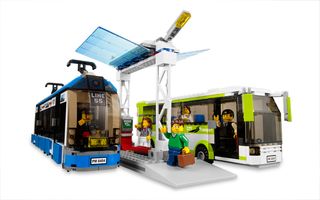 Lego has recently released an excellent new Public Transport set (see
pictures attached), which my sons and I had lots of fun building and
playing with this last weekend.

Urban public transport toys are not common, and they tend to be either caricatured buses and trains for younger infants or expensive, detailed models for adults.  That’s why I think this set for 6-12 year olds is remarkable for allowing children a more realistic, hands-on opportunity to play with transit vehicles, infrastructure and concepts, reflecting what they see on the streets in real life. 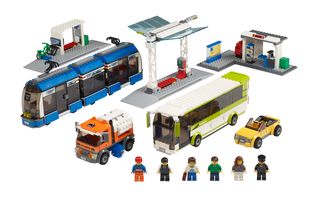 What is also remarkable about this set (besides the articulated low-floor tram and the bike rack at one of the stops), is the seriously cool and modern design of the vehicles and transit stops.  I can’t say if toys as attractive and interesting as these might dignify and elevate the perception of public transport in children’s minds (they certainly do for me) but if nothing else, they would allow children at an impressionable age to engage and explore the idea of urban living with transit as a normal part of life, alongside the usual cars, trucks and fire engines.

Interesting.  Certainly, a lot of our assumptions about the world are encoded through childhood  play.  It’s a great way for one generation to embed its values in the next, for better or worse.