Want to know how many people commute from one zipcode to another?  Here’s a nice graphical tool by Harry Kao.  Input a zipcode and it shows the commute distribution by origin zipcode, from the 2000 Census.  I put in 94111, the San Francisco Financial District. 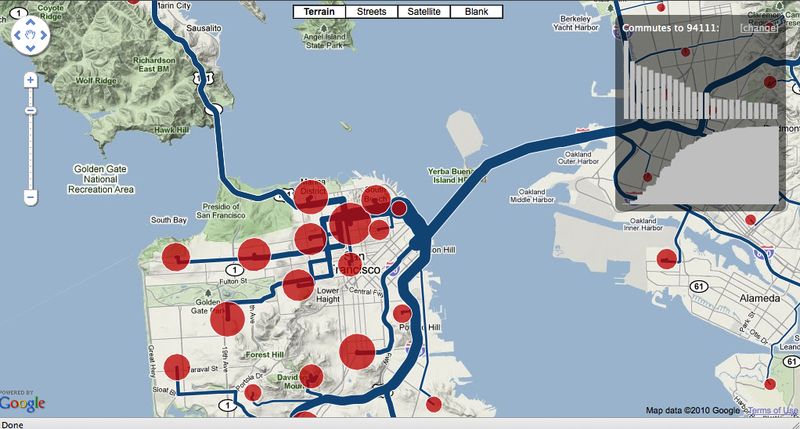 The visual representation encodes a dreadful bias, though:  It assigns these commutes graphically to the road network, as though everyone travels by car!  In so doing, it appears to give evidence that San Francisco needs an Embarcadero Freeway!

Be careful with maps!  Good maps are designed to tell a story.  But automated mapping tools such as this one can make maps that are incredibly detailed, scientific-looking, and utterly misleading.   This happened often enough when authors of maps actually looked at their own maps. But with automated mapping we face a world in which “authors” of an automated mapping scheme never even see the map they produced — until it shows up in somebody else’s argument.

For Any 6-12 Year Olds Out There …
Meta: Secrets of Soaring Readership