One of the most disconcerting thing about being a tech customer these days is that the Apple-Google rivalry can be expected to create more grief for people who like both, as each punishes its customers for liking the products of the other.  It is already very laborious, for example, to sync the (Apple) MacBook's standard Calendar and Address Book with (Google) Android's — a big problem for me as both a Mac and Android user.  Now we're going to see Apple smartphones that don't want us to use Google Maps.

Yes, Apple thinks it's going to improve on the most transformative automated mapping tool of all time.  By all evidence they've decided that a cool, slick look is so important that it doesn't matter whether the map gives you the information you need.  Gizmodo has an excellent comparison, including this graphic: 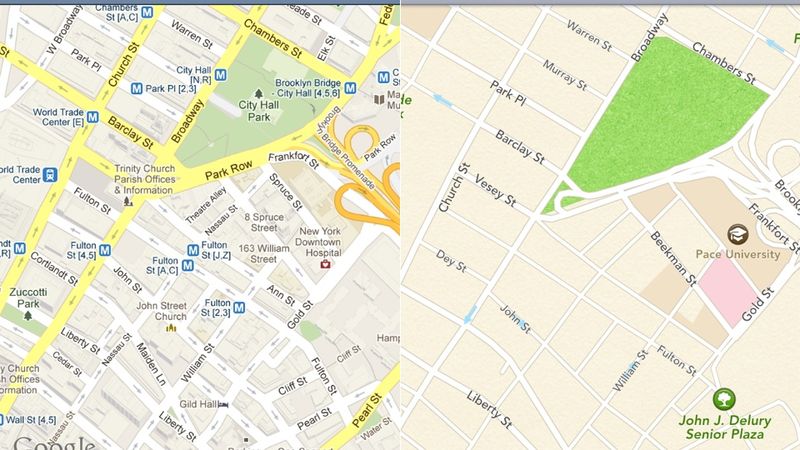 That's a slice of Lower Manhattan: Google on the left, Apple on the right.  Yes, the Apple map is pleasing on the eye, but do you turn to mapping software for serene imagery or to see the layout of your city and how to do things in it?

While everyone can pick nits with Google Maps, Google has done an amazing job at massing large amounts of useful information in compact and legible ways.  Their maps are aesthetically cluttered, but the clutter is accurate:  Lower Manhattan is a cluttered place and we love it that way!  A great city is full of opportunites and we want to know about all of them.  I like feeling a little overwhelmed by a Google Map, especially as compared to the illusory cool — also known as lack of content — that Apple is trying to convey.

The official reason for a transit blog to complain, of course, is that Google has done a lot of work on integrating transit data into its maps, while Apple, to judge from its beta, thinks of this as a detail that can be added later.  It will be interesting to see whether people really give up Google Maps for a slicker but more impoverished tool.  If not, this could start driving transit users toward Google's Android, where the variety of third-party hardware designs already mean a tool much better suited to your hand, and your taste.

You are here: Home › apple maps vs google maps