Posted on June 14, 2012 in Paris, San Francisco
Following up on my praise of the bus lanes of Paris, San Francisco reader Ian Leighton logs these observations about the operation of Parisian boulevards from several points of view. Ian is a co-founder of Embark, a firm that designs mobile applications for transit systems around the US and London.
In addition to Métro / Bus / Tram / RER, I also walked (bien sûr) and made use of the bicycle sharing system Velib', so I was able to experience the use of street space in Paris from the perspective of several modes.
The buses work pretty well, and seem to be well-ridden. They connect quartiers that the metro doesn't and (in my case) allow for enjoyment of the city at street level, for better geographical education of how things are connected in the non-gridded city. I found I took buses much more often when the weather was beautiful.
About bus boarding: The normal length buses seem to still insist that you board at the front, which is still relatively quick, as I also observed in London, since most people have Navigo smart cards. They even have two "lanes" for boarding through the front door, with a divider and Navigo reader on each side. You can still pay in cash/coin with a hefty surcharge. The articulated buses allow all-door boarding as you observed, which is how the trams operate, convergently. Buses, in general, feel very modern and welcoming. As far as I could tell, there was no "old bus" vs "new bus" as we have [in North America] often, and all the buses treated riders like citizens. Low floor, line maps inside, upcoming stop displays, clean interiors, consistent branding and appearance.
Paris has seemingly done a good job of managing its street space, and it is dynamic both in daily use and over time.  The city seems to constantly make small modifications to its streets.  In daily use, the (wide, separated) bus lane also serves bikes and sometimes deliveries. Depending on the width of the bus lane, these are sometimes clever parking/delivery spaces cut halfway into the sidewalk that still let the buses squeeze by, sometimes not. Sometimes deliveries are prohibited during peak hours, when traffic isn't free-flowing enough for the bus to use a travel lane. On less wide streets, a non-separated bus lane is narrower and really mostly used by bikes, and by buses when the other lanes are truly blocked up with traffic. 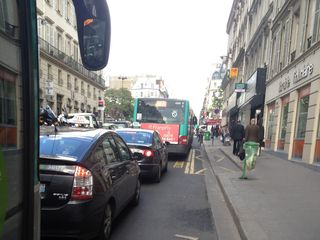 The bus lanes are a great addition to the bike network. Bike lanes can get a little creative, transitioning from sidewalk to street to bus lane to across the street to disappearing. But even around giant intersections like Place d'Italie (13th), they guide you decently well around the craziness with sharrows and bike traffic lights. And you always have the option (and in some places, like Bastille and Concorde, it's the only option) to just, well have at it with the scooters, cars, trucks and buses in the fray — which isn't nearly as bad as it seems, since Parisian drivers are pretty considerate and aware of people on bikes.
On a longer-term basis, the city seems willing to make changes: converting its "payant" parking spaces into auto'lib stations, livrasion spaces, and dedicated bike lanes as well. It definitely feels like if you come back to the same street in a few years, there will undoubtedly be some slight modifications.
One thing that struck me was there there is still a ton of parking on Parisian streets! It seems that if you give a Parisian car-owner (or politician, planner, decision-maker?) the choice between removing a parking lane or a travel lane, they'll prefer the latter, and preserve their parking.
Caveat: traffic is still a problem. During rush hour, taxis and right turns can clog a bus lane pretty quickly. There doesn't seem to be the same gridlock law as we have in California. The effective lanes during the afternoon rush hour, in the 9th, 10th, and 18th (N / NW) end of Paris at least, where I observed them, suddenly have a line of taxis and buses. This is usually okay for bikes, but occasionally it gets bad enough that bikes have to do some weaving through the lines of taxis. A little improvement is still needed, as always.
These photos were taken during rush hour on rue Lafayette in the 10th. There was so much gridlock, and so many taxis in the bus lane, that 5 or 6 buses were stuck in line with the taxis, between two bus stops. I don't recall whether any were bunched on the same route. 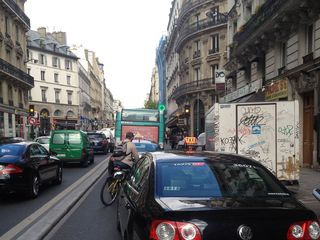 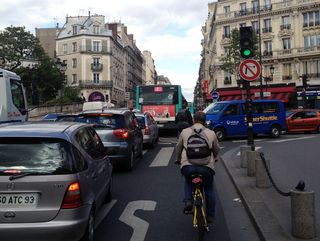 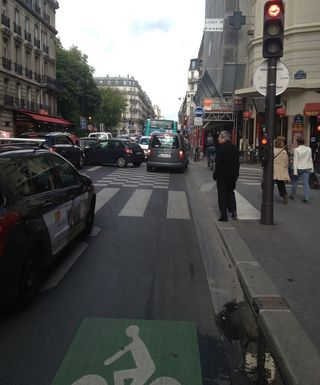 Coming back to San Francisco, I bike a lot more, since it's so much faster than transit. Being in Paris has made me realize the potential to have a great bus system (barring the full-scale metro, or even Parisian style tramway, we doubtless need in a few corridors and can't pay for). Removing stops, contraflow and separated (or at least colored) bus lanes to signal to drivers that they're not supposed to be there, and signal priority would doubtless do a lot to speed up MUNI. It even seems, to me at least, that the Muni Metro T line doesn't even have signal priority, even with its own right-of-way… or if it is, it's pretty ineffective. Oh well, I'll have to wait for the San Francsico Transit Effectiveness Project, someday.

You are here: Home › guest post: a san franciscan on parisian street design