The unglamorous but essential struggle over the spacing of consecutive stops or stations on a transit line is an area where there’s a huge difference in practice between North American and Australian agencies, for reasons that have never been explained to me as anything other than a difference in bureaucratic habit.  In Australia, and in most parts of Europe that I’ve observed, local-stop services generally stop every 400m (1/4 mile, 1320 feet).  Some North American agencies stop as frequently as every 100m (about 330 ft).

(Already I can hear someone asking “but how many blocks is that?”  Well, it depends on how long your city’s blocks are.  Even in San Francisco, where block length is wildly variable, I’ve heard people insist on asking for a standard in blocks, which is complete nonsense.  Living on a short block doesn’t make you more entitled to a bus stop near your house.)

San Francisco is at it again, trying to rationalize its stop spacing on some of its most frequent lines.  So I thought I’d take the occasion to lay out some stop spacing basics.

The geometry of stop spacing works like this.  Every stop or station has a walk radius, the area from which most people would be willing to walk to a stop.  In the most idealized world, which is where some planning happens, this radius defines a circle around each stop. 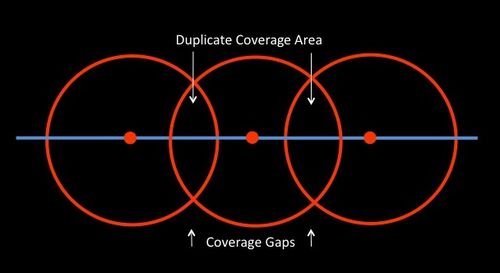 How big is the walk radius?  Actually, different people are comfortable walking different distances, so a truer view of these circles would be very fuzzy, gradually dissapating further out from the stop. You don’t want to look at that, though, and it’s hard to do geometry with it, so transit planners generally observe that the walking distance that most people seem to tolerate — the one beyond which ridership falls off drastically — is about 400m (around 1/4 mi) for a local-stop service, and about 1000m (around 3/5 mi) for a very fast, frequent, and reliable rapid transit service.  (I, personally, will walk further than this.  You may not be willing to walk even this far, but as an approximation the 400m rule for local service seems to work pretty well.)

But of course, the circle is what the walk radius would be if you could walk absolutely anywhere in the area, including diagonally, through buildings, etc.  In the real world, we walk along some kind of network of streets and paths.  The design of that network is therefore a crucial element of walking distance, which means that it’s also relevant to stop spacing.  Consider these two drawings, from this post:

These happen to both be in the Seattle area, but your city probably contains examples of both of these network types.  The car-oriented network on the left is full of obstacles to the pedestrian, so the actual area you can walk to (the blue network) is less than a third of the ideal radius (red).  On the other hand, in a dense grid (of streets and other pedestrian links), like the one on the right, maximizes the possible walking distance.  The actual area within walking distance is diamond shape, i.e. a square rotated 45 degrees from the transit line.  Almost two thirds of the ideal radius is in walking distance in such a network.

How do we decide about spacing?    Consider the diamond-shaped catchment that’s made possible by a fine street grid.

Ideal stop spacing is as far apart as possible for the sake of speed.  But of course people around the line have to be able to get to it. In particular, we’re watching two areas of impact:

If we are doing a local-stop service, and we assume that people will walk 400m, then the diamonds are 800m wide.  If we then set the stop spacing at 400m, the diamond on the left will touch the one on the right.  In other words, every point on the line will be in a duplicate coverage area.  The coverage gap, meanwhile, gets smaller.  In fact, if the stop spacing is the same as the walking distance standard, the coverage gap’s area and the duplicate coverage area are the same.  Play with this yourself until you believe it.

So does that make this the right answer?  Not necessarily for two reasons:

So that’s the geometric tradeoff that governs stop spacing in flat terrain with well-connected street networks. You can see how variations in terrain would shift the calculation.  If the transit line is climbing a steep hill, you can make a case for stops closer together.  Walking downhill is usually easier than walking uphill, so some people will value having two stops so that they walk downhill to one to depart, and walk downhill from the other one as they’re returning.  That’s why stop spacing is often a bit closer when going uphill or downhill.

In general, though, we always want to push stops as far apart as possible while still providing enough access, both for speed and, because the fewer stops we have, the more infrastructure we can afford to provide at each.  But the limits of our ability to widen stop spacing is defined by the geometry I’ve outlined.

Finally, while I’ve been talking about local stop service with a walk distance of about 400m, the entire calculation is exactly the same for any distance.  For example, if we are placing rapid transit stops, and we think that the maximum walk distance to them is about 1000m, we can set the stops 1000m apart; thus we end up with the duplicate coverage area that’s the same size as the coverage gap.  Then we can argue about whether, in the given situation, we should push wider or narrower.

Of course, there are all the other kinds of access: Park-and-Ride, Kiss-and-Ride, cycling, etc.  Still, the walk is the dominant factor in transit access potential, because even if you use a vehicle for access, you’re likely to be a pedestrian at the other end of your trip.  Of course many people are pedestrians at both ends.  (The exception is when you take your bicycle on board, which will always be a problem at crowded times.)  Sooner or later, we are all pedestrians.

Finally, here’s a fun question to think about:  If you had two parallel transit lines, how might the stop locations on one of them affect the logical locations of stops on the other?  What’s the furthest apart that the lines can be (in terms of multiples of the maximum walking distance) for this consideration to matter?  Think about it before you look at the comments, because someone’s probably written the answer there!

46 Responses to Basics: The Spacing of Stops and Stations

You are here: Home › Basics: The Spacing of Stops and Stations