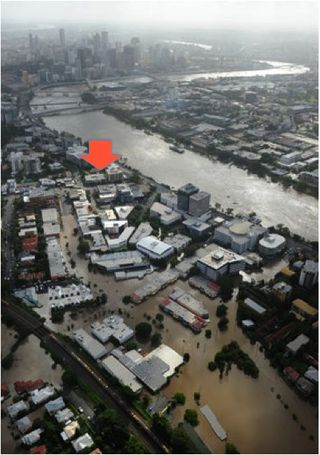 The Brisbane River is expected to crest tomorrow at a level not seen for over a century.  The state of Queensland has been enduring severe flooding for weeks, but only this week has the disaster arrived in the capital.

This ABC image from this afternoon is looking east toward downtown Brisbane, with the partly flooded Milton district in the foreground and Moreton Bay in the far distance.

Our firm's headquarters office is in the building under the orange arrow.  We are on Park Road, which follows a little ridgeline surrounded by lower-lying land.  So we are pretty fortunate, so far at least.  Obviously, the power is out, and our offices are shut down as staff focus on protecting their homes and loved ones.

I am watching from afar in Canberra, following the ABC coverage.  I'm thinking about my colleagues and clients, of course, but also about all the urban treasures of Brisbane that lie right along the river, including the major art museums, the State Library, the historic districts, the old botanic gardens, and many of the city's most vibrant and interesting inner-city neighborhoods.

As for transit, the wharves used by the popular river ferry network have been "smashed to pieces," according to the mayor.  A heavily-used segment of floating walkway, which carried the riverside bike-ped path past the cliffs of New Farm, is gone.   Still no word on the city's underground transit infrastructure.

Brisbane is often compared to Portland because in both cities, the urban renaissance began through a new engagement with the river.  As a result, much of the revitalization and urban invention of the last decades has gone into riverside districts that are now in danger.

Loss of life in Brisbane is likely to be low, because unlike nearby Toowoomba and the Lockyer Valley, which saw devastating flash-floods yesterday, Brisbane has gotten some warning.

Still, for anyone who's admired Brisbane's romance with its river, this is heartbreaking.

notes on my day job
brisbane: the flood at its peak

5 Responses to brisbane: the 100-year flood