A few days back I asked for examples of connection-activated civic squares, public squares that serve as both a symbolic and functional heart of the community, but where people connecting between transit lines form part of the square's activity.  I was looking for a real-world example of something like this, which is a design for a (non-existent) square in Surrey, an outer suburb of Vancouver: 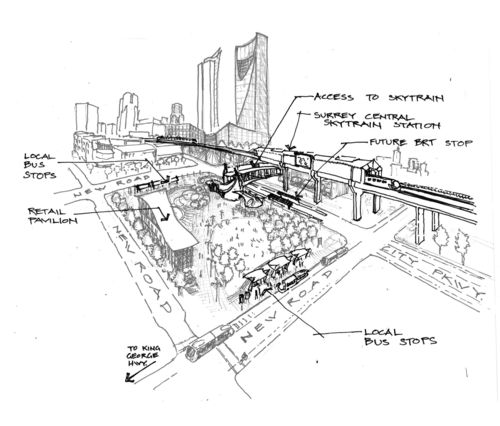 The idea arises from the desire to have bus-rail connections happen in an interesting urban setting, rather than a typical suburban bus interchange that features an area where only bus passengers would be.

Isn't the idea to reduce transfer penalties, not to deliberately increase them for other ends? Getting off the train on a cold, stormy night, I think I would resent being made to animate an otherwise deserted public square – running 200m for my bus, with my umbrella blown inside out, dodging puddles. Even worse if it was on the way to work in the morning!

Indeed it is.  I always want connection walking distances to be as short as possible.  The square above is 100m wide, so maximum walks would be no more than that, and that's not out of line compared to what you'll do in tunnels in many of the great subway systems of the world.  But I'm not sure that walking across a square is more onerous than walking along corridors or tunnels, so long as there's some reasonable alternative in bad weather.  And of course the urban designers are always telling us that visual interest makes walks feel shorter.  When walking along a typical subway tunnel lined with shops, I feel reduced to the status of consumer.  I would much rather walk across a square on a nice day.

One reason that these arrangements are unusual, and that I should have noted, is that they require buses to be organized in an inverted couplet.  In a country that drives on the right, you would expect that a westbound one-way street would be north of its eastbound partner.  That's the way two-way streets normally divide.  In this Surrey proposal, we set up the car traffic to do that but the buses to do the opposite in contraflow lanes.  That's how we got the bus stops to be on the square rather than across the street from it.  This is a great trick in situations where you already have one-way couplets of streets.  It gets buses out of traffic and puts them with their doors facing each other so that they can stop at opposite sides of a square (or even just at opposite ends of a pedestrian street or lane).

(Portland's transit mall is a famous example of an inverted couplet — the northbound street is west of the southbound street — and if the Pioneer Courthouse Square were one block further east, it would be a spectacular example of a connection-activated square.  The mall couplet does help create an effective square at PSU Urban Center Plaza, where the mall and the streetcar intersect.)

It was quickly clear from the reader suggestions that really large connection-activated squares have to be in pretty big cities.  Even there, size can be a problem.  Note how Lyon's Place Bellecour, below, is reduced in width by a bit of landscaping.  The whole block is 250m x 170m, but the trees reduce the purely open space to about 100m wide.  At that, it's still the largest clear square in Europe, says Wikipedia.  There's room for two soccer fields in the remaining open space, three if that guy on the horse would get out of the way. 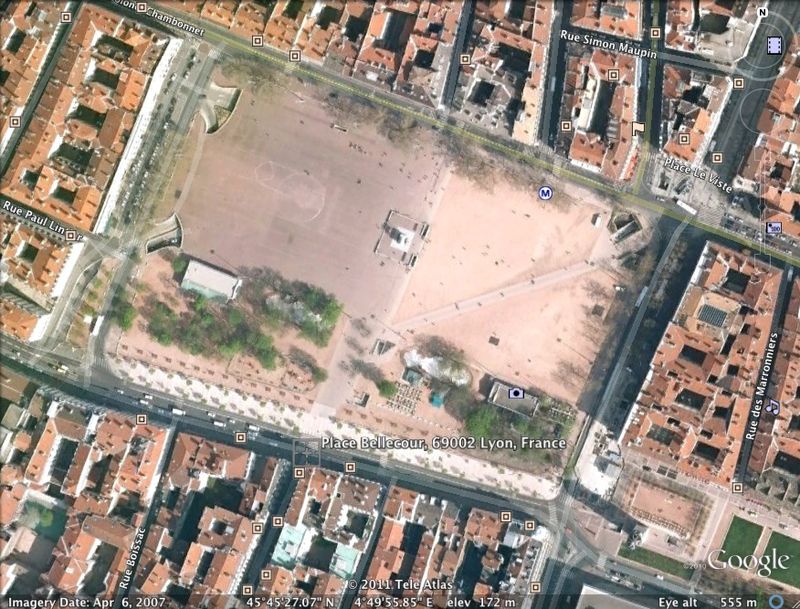 Place Bellecour does have a bus stop facing onto the square on the east side, but the main east-west bus movement is east on the south side, west on the north side, which in France puts the stops across the street from the square.

Many readers pointed to Berlin's Alexanderplatz, a vast and intense area that includes Berlin's iconic tower, the Fernsehturm.  Alexanderplatz is technically the northeast part of this image, but it's all intimately connected. 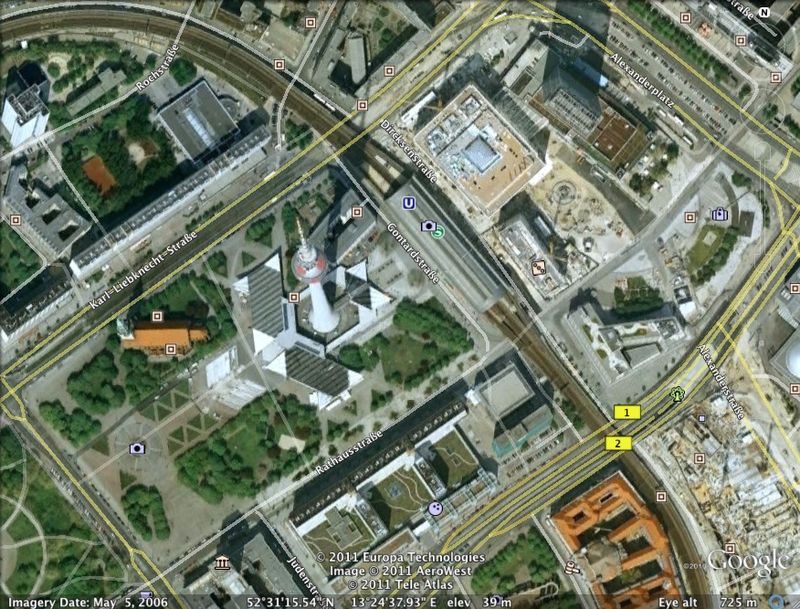 The interaction here is between rapid transit ("U") at the center of the image and tram and bus lines.  One of the tram lines extends northeast and northwest from just south of the rapid transit station.  As I recall some of these trams turn to stop alongside the station (so are not activating the plaza) but others do not, so some people do walk across parts of the plaza.  Also relevant are buses on both the far northeast corner of the image and on Spandauerstrasse, which is the street cutting across the southwest corner.  Greater Alexanderplatz is a series of spaces where the interaction of transit and urban life is quite intricate.

A clearer big-city example is Syntagma Square, Athens.  It's about 110m on a side, and seems to work well, though Google is a little fuzzy there: 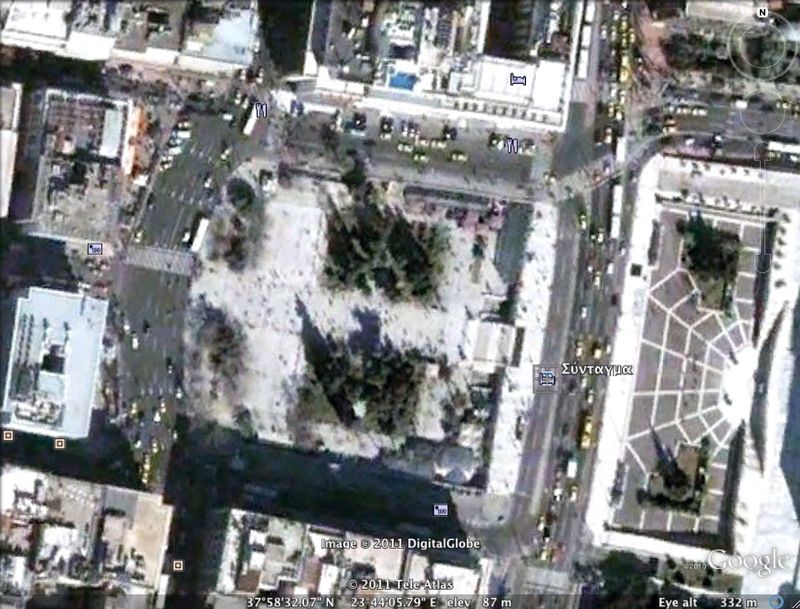 Syntagma has an underground metro station on the east side of the image, including entrances right into the square.  Buses are organized as a couplet, and in this case, it appears to be an inverted couplet so that the buses open into the square, but I can't quite be sure.  The Athens Tram also terminates there.  The position next to the Greek parliament building ensures that the square is a symbolic center of the city and nation.

Several readers suggested Piccadilly Gardens, Manchester, UK.  I had in mind hardscaped plazas, but this one is interesting as an example of how much transit work a grassy park with a fountain can do.  It's about 120m x 90m at its widest points. 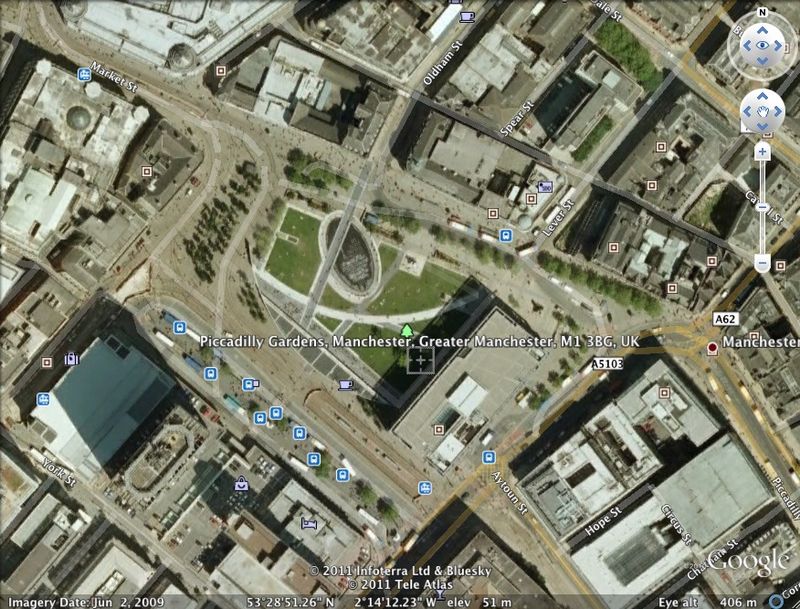 This is clearly a major tram+bus terminal, with lots of space taken up by end-of-line storage as opposed to just stops.  That's part of why the transit operations seem to dominate the space to a degree that urbanists are likely to find objectionable.  Note that the main pedestrian links between connecting services are paved paths across the gardens.  The landscaping is a nice way of saying "this is a park, not just a transit interchange," even as the paths serve the interchange volume.

Last among big-city examples, I'm intrigued by Insurgentes station plaza in Mexico City, which is in a roundabout roughly 120m in diameter. 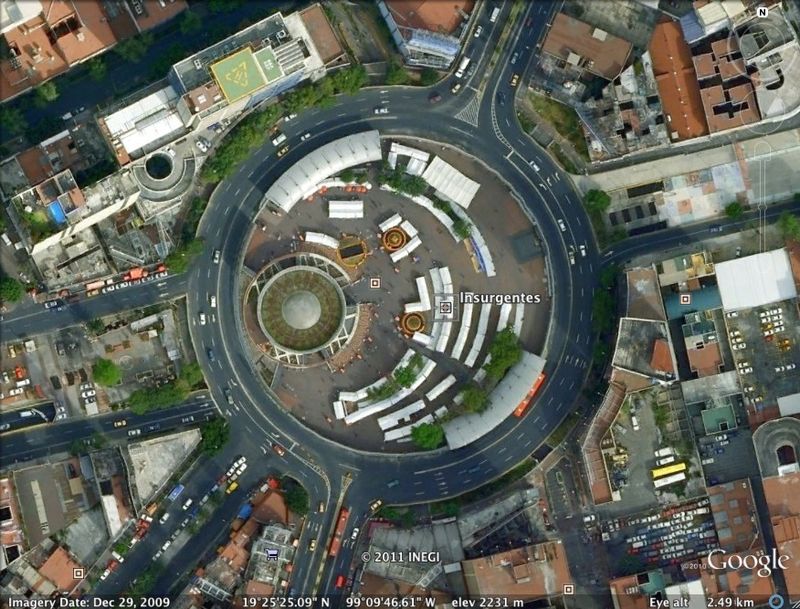 Note that the red buses appear to cycle the circle in a contraflow lane, i.e. clockwise where all other traffic is counter-clockwise, so that they open onto the central plaza.  (UPDATE:  I am now advised that they are operating with-flow, counter-clockwise, but in their own lanes, and have doors on the left that enable them to open onto the plaza.  The two silver-roofed structures are their main stops).  Obviously, this is a massive bus-rail connection point.  The red buses are from the city's Bus Rapid Transit system.  This is certainly enough pedestrian volume to activate a space, and indeed it looks as though some kind of merchant activity is going on.  But of course a roundabout is inevitably more of an island than a heart, as you'll need to go underground, through the subway station, to cross safely to any part of the surrounding district.

But when we step down to smaller cities, or to outer locations that aren't major transit hubs, the successful squares are quite a bit smaller.  Several readers praised Mont Royal station plaza in Montréal.  The subway station is on the west side, with bus stops on the east and north sides.  This looks like a case where terminating buses are actually looping around the square. 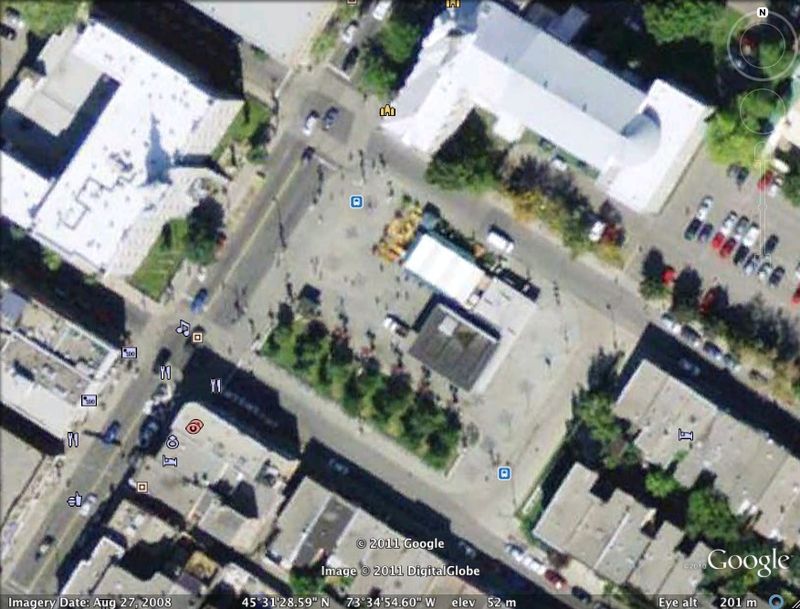 But it's only about 50m wide.  Many readers suggested connection-activated squares on this scale, often in secondary nodes of big cities or in suburban areas, especially in Europe.  Many such squares were mentioned, but Stockholm's Odenplen is typical.  And even in North America, small open spaces, usually  less than 50m on a side, are common at some subway stations; Vermont/Santa Monica station in Los Angeles and the two Mission BART stations in San Francisco come to mind.  Another example, at a simiar edge-of-downtown scale, is the PSU Urban Center plaza in Portland, which handles interactions between an inverted couplet of north-south buses and an east-west streetcar.  The open space there, too, is less than 50m on a side.

Thanks to everyone for contributing to this adventure!  I'm sure there are many other great examples I haven't mentioned.

This work is important to me because many designs for great highrise urban nodes at rail stations collide with the needs of connecting and terminating buses, and it's often tempting to push the buses away.  These examples, at a range of scales, capture how transit connections and urban life can happen in the same place, and indeed support each other.  Links to other great examples are welcome!

pricing and “the poor”
are toll lanes “congestion pricing”?