The planning for the missing link in Vancouver's transit network has taken the next step. Newly refined options are out for public comment.  The corridor corresponds, at least in its endpoints, to the orange line on this map, where the existing Line 99 runs one of the most frequent and crowded bus corridors in the west. 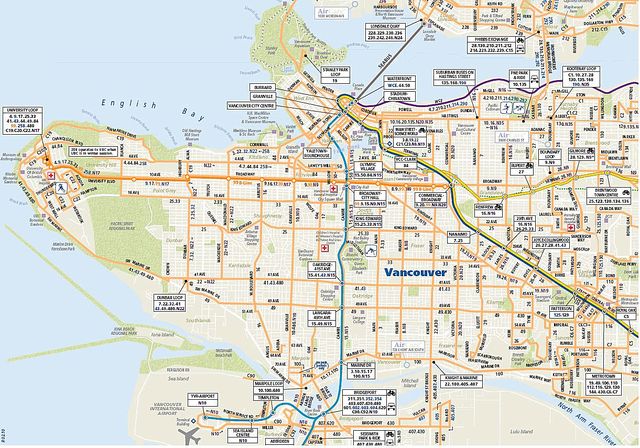 The west end is the University of British Columbia (UBC).  The east end is Commercial/Broadway station, the main transit gateway to the entire eastern two thirds of the region.  In the middle is Vancouver's second downtown, Central Broadway, which includes City Hall and the main hospital, as well as a station on the Canada Line to the airport and the southern suburbs.  (Skytrain and the Canada Line form the region's driverless rapid transit network.)  It's hard to overestimate how central this corridor is not just to the city, but to the region.  For example, many trips between southern suburbs and northeastern ones (Richmond to northern Burnaby say, or Coquitlam to the airport) will be made much easier, or not, depending on this project's outcome.

The newly refined options include rapid-transit options (widely presumed to be extensions of the Skytrain Millennium Line) either to UBC or possibly just to Arbutus Street, which makes sense to consider because it's the end of the dense or densifiable portion of Broadway, and completes all of the regional-connection needs except for UBC itself.  They also look at light rail options and Bus Rapid Transit, both of which would need an exclusive lane.  Light rail options are suggested both on Broadway and also veering off onto an alignment closer to False Creek, feeding into Great Northern Way.

It looks like an interesting process, one that will impact the transit mobility options for a vast part of greater Vancouver.

25 Responses to vancouver: new round of broadway line options

You are here: Home › vancouver: new round of broadway line options