Main points of this article:

If you’re going to form coherent views about transit, you have to understand what transit service costs to operate.  There are four parts to this cost:

The mixture of these costs varies, but in the high-wage developed world, you can go far by focusing on just one element: the time-based costs.

It’s All About Labor

Driver labor, and related time-based costs, are the dominant element – often 70% or more — of transit operating budgets in the developed world.

Most transit vehicles require one transit employee on them to operate, whom I’ll call the driver.  This person’s job description varies quite a bit based on the technology and operations style of the service.  Obviously, driving a train is a different job from driving a bus, and you may or may not be interacting with passengers and dealing with fares.  If you’re the employee sitting at the front end of an automated San Francisco Bay Area BART train, you’re not really driving so much as watching for trouble.  Many North American transit agencies prefer to call the on-board employee the operator, but that term is too vague to be useful here.  So regardless of their exact job description, I’ll call a single on-board employee a driver.

For these one-employee-per-vehicle systems, then, we can understand the basics of operating cost by focusing on how drivers need to be working, and for how many hours.  You may sometimes may hear a transit planner say “if we do this, we’ll save a bus.”  What the planner really means, though, is that we’ll save a driver.  In the high-wage developed world, the driver, not the transit vehicle, is the basis of operating cost.

This is the main reason why transit agencies don’t save much money running small buses rather than large ones, as advocates of small buses often assume.  If an agency does talk about small buses as being much cheaper to operate, they’re probably referring to a difference in driver wages.  Often, some mixture of labor contracts and licensing requirements can allow small-bus drivers to be paid less than large-bus drivers.  In that case, the smaller vehicle is cheaper to operate only because of the pay scale, not because of any feature of the vehicle itself.

So how many service hours does it take to run a line?  This is the one equation that we can’t avoid.  Let’s ease into it.

If a line requires five vehicles (with drivers) in service to cycle the line, and it runs for twelve hours, that will be 60 service hours, 5 x 12.  Easy.  But how do know how many vehicles we need?  Here’s the crucial equation:

Suppose a line takes 20 minutes to run, in service, from one end to the other, including break time for the driver.  That’s 40 minutes round trip, so the cycle time is 40 minutes.  Every 40 minutes, a vehicle has completed a cycle of the line and is ready to start another.

So if we only wanted service once every 40 minutes, or longer, we’d just need one vehicle to drive the line.  That elapsed time between consecutive trips on a line is called the headway, and it’s the main measure of frequency.  (Remember that high frequency means a low headway.)

Now suppose we want service to come at a 10-minute headway – that is, service every 10 minutes.  We’d need four vehicles and drivers to drive the 40-minute cycle.  Do you want service every 5 minutes?   That will be eight vehicles, and drivers.  If you double the frequency (by halving the headway) you’ve doubled the operating cost.

In short, transit’s operating cost is lumpy.  You cannot hire a fraction of  driver.  So at low frequencies, you often end up with inefficient patterns due to the relationship between headway and cycle time.  If we run a 20-minute headway on our route that cycles in 40 minutes, we’ll need two vehicles.  If we run a 30-minute headway, we’ll still need two vehicles, which means we’re really paying the drivers for a 60-minute cycle.  In that case, the drivers will have 20 minutes of extra break time every hour.  Drivers may like these shifts, but transit managers don’t.

Lumpiness has important consequences when designing lower-frequency networks, such as local bus routes in low-density suburbs.  In these cases, good planning designs routes to be of a certain length, so that they will run an efficient cycle. If our network of local routes is meant to all run every 30 minutes, for example, we try to design routes that cycle in 29 or 59 minutes, but not 31 or 61.

A small deterioration in speed can cause sudden big changes in operating cost.  If we’re running 30-minute frequencies on a route that cycles in 29 minutes, that will require one vehicle.  But if for some reason the line slows down just a little, so that it now cycles in 31 minutes, we have to add a whole additional vehicle and driver, doubling the cost of running the line.  A mere 7% increase in the cycle time has become a 100% increase in operating cost.  In that case, a planner may try to redesign the route to make it shorter.

Lumpiness is an important reason that route design and scheduling need to be done together – especially in low-frequency networks such as those of small cities, outer suburbs, or in the middle of the night in big cities.  Some transit agencies try to think in separate, rigid, non-repeated steps:  First, planners design the route.  Second, we drive it and establish the running times.  Third, schedulers write the schedules.  Thinking that way makes it impossible to optimize the efficiency of schedules and connections.  The three tasks have to work together, or at least in several cycles of revision so that planners can revise their structures in light of the apparent running times.

The Elements of Cycle Time

So here’s how it all fits together.  Operating cost varies mostly with service hours (technically called revenue hours in North America), and these hours are figured like this (click to enlarge and sharpen): 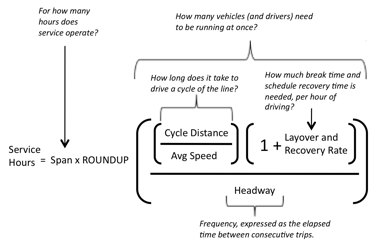 Too hard?  Fine, just remember this:

04box: on the to-via problem
01box: on mobility