This blog rarely goes on about interesting transit vehicles, since my main interest is in getting people where they're going in whatever vehicle makes sense for the purpose.  But while working in Wellington last month, I made early morning ritual of climbing to the Botanic Gardens summit just west of downtown, and on one such walk I took some time to admire the cable car. 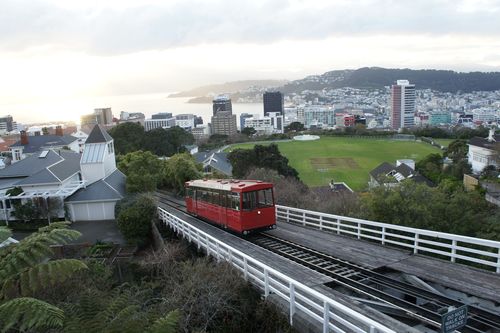 "Cable car" generally means any vehicle attached to a cable that provides the locomotion.  The car has no engine, but an engine of some kind is moving the cable.  The cable can be aerial (gondolas, aerial trams) or underground (San Francisco cable cars) or it can just lie on the surface in a special guideway, as in most funiculars.  Wellington's is essentially a funicular: it runs in a dead-straight track up the side of a steep hill.  The two cars are fixed to the ends of a single cable, connected at the top, so that they move in counterweight fashion, one car rising as the other descends.

Unlike most funiculars, though, it has more than two stations — five in fact.  At Talavera station in the exact middle, tracks widen out so that the cars can pass.   Everywhere else the cars share one track, but with two separate rollers for the two cables: (In this case, the presence of just one cable means that one car is below us, the other above.)

The spacing of the other stations is limited by the design or the system, because when a car is at the station one up from the bottom, the other is stuck the same distance below the top.  In Wellington, even spacing of stations — not always ideal for local geography — ensures that both cars are at stations whenever they stop.

But enough with technology fetishes.  Why is this thing useful?

Easy: it's a straight line, running at high frequency, through high density, where competitors are at a disadvantage.

Cable cars (aerial or surface) can make sense in settings where you want a straight line up the side of a steep hill — especially if there's no straight road that a bus could follow.  That's exactly what the Wellington line (marked by the five yellow pins) is: 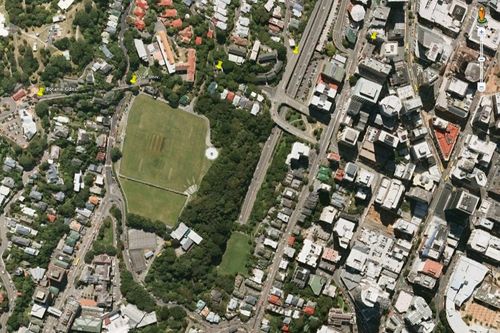 The terminal stations are Lambton Quay in the heart of downtown and the Botanic Gardens summit.  There's demand everywhere on this dense hillside.  Botanic Gardens station offers a level walk into the fairly dense Kelburn district to the southwest, while Lambton Quay is right on the Golden Mile, where buses come every minute or less to take you north or south through downtown, and beyond.

The other stations are Victoria University, one down from the top, Talavera in the middle, and Clifton, one up from the bottom.  Victoria University's campus is visible on the south side of the above image.  It has its own bus services, but it's a short level walk along a terrace to its station.

And while climbing this hill is something I might do as early morning exercise, it's understandable that you might want an alternative to that.  The climb is 120m of elevation gain in only 612m of horizontal length, a grade of nearly 20%.

But the real reason I thought to write about it is the interesting feature observable at the top. 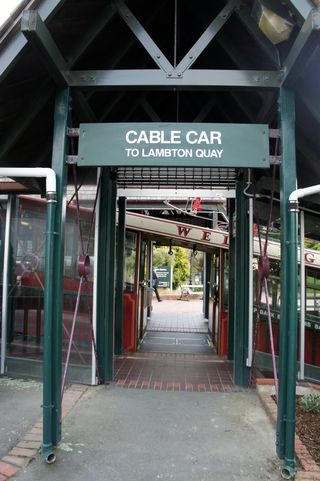 The vehicles themselves are designed for their constant slope.  The floor is always parallel to sea level while the car's structure is tilted 20% from the floor, to match the grade.

As a result, it's possible to open the car on both sides and produce a level boarding from the surrounding ground.  Where the car dwells at the top, as in this image, you can even walk right through the car as though it were part of the sidewalk.

I'm always interested in ways to make transit feel more continuous with the pedestrian realm.  I long for buses with precise docking for absolute level boarding — not just to eliminate the delay of wheelchair ramps but also to create a feeling that the bus is a moving piece of sidewalk, that you are not leaving the street to crawl into an oppressive enclosure.  Local transit won't really feel effortless to use until we have this effect.

So that's why this image appealed to me, so much that I even indulged some uncharacteristic technology-fetishism.  Because the effect in this picture in important, and if I need a cable car to get it, I'll take a cable car.

25 Responses to wellington: a sensible tourist on the cable car

You are here: Home › wellington: a sensible tourist on the cable car