About 18 years ago, when I was chairing the Citizens Advisory Committee of the San Francisco County Transporation Authority, I remember a day when staff effusively advised that they'd gotten budget to put up green signs around the city to help motorists better identify the streets.  The green sign in this picture, for example. 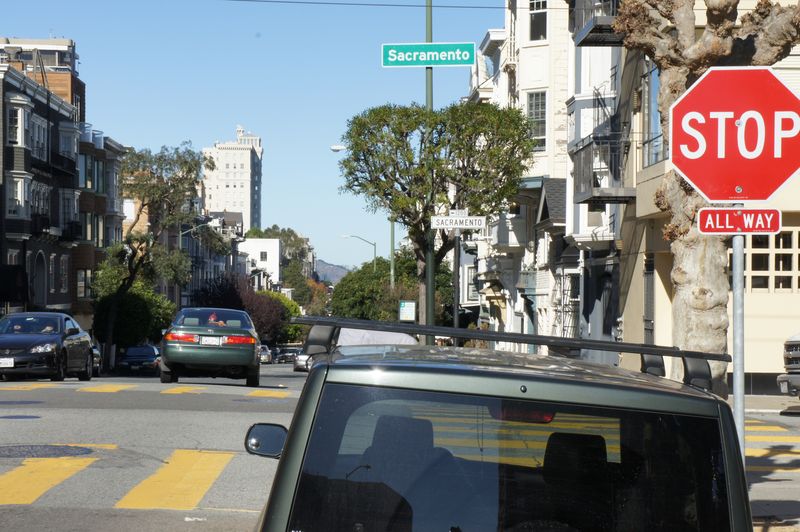 This is on Jones St. northbound approaching Sacramento St., but there are many similar cases.  (Trivia note: One of these signs appears in Gus Van Sant's fine film Milk, which is set in the 1970s.  It was the film's most glaring anachronism.)

Nobody asked my committee's opinion when these signs went up.  And today, briefly touring my old neighborhood, I find that these signs are still there.  Has nobody questioned them in all this time?

Most readers will see the issue at once, but if you don't, here we go:

The motorist faces a stopsign.  That means they should be looking at the crosswalk in front of them, and the other traffic approaching.  What's more, they should be stopped, or stopping, which means that their focal length should be short; they don't need a sign that's meant to be read at high speeds.   Yet high speed is implied by the green sign's large typesize, high position, and "freeway font"; the green sign has the same color, font, and typesize typically used on California freeways.

San Francisco's standard black and white streetsigns are the most legible I've encountered anywhere in the world.  They are a global model for simplicity, clarity, and grace.  There's one right below the green sign in this pic, in front of the tree.  The text on these signs is over 1.5 inches high.  If you can't read that black-on-white sign while stopped at a stopsign, or decelerating to it, your vision is so poor that you shouldn't have a drivers license.  Only seriously dangerous drivers need the green sign.

Then there's the question of focal height.  A sign placed very high, like the green sign here, is pulling the driver's eye away from the ground plane, which is where the squishable pedestrians and cyclists are.  Extreme type size also encourages reading the sign from further away, which means focusing further away, which means a greater risk of not seeing the pedestrian in front of you.

Motorists choose their speed and focal length based on a range of signals, not just explicit commands and prohibitions.  These signs may be appropriate on high speed multi-lane streets, where you may need to change lanes to turn once you've recognized a cross-street.  But what are they doing at stopsigns?

I'm sure there are manuals that say this is compliant to standards.  But many bad ideas are endorsed by manuals.  Does the green sign make sense?  Argue with me. 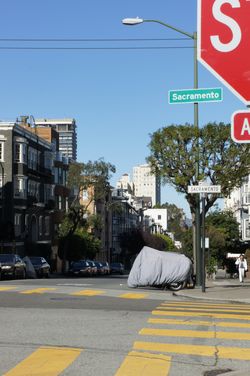 PS:  "Wait, Jarrett didn't say he'd be in San Francisco, and he didn't call!"  Sorry, it was just two days, and I'll be back soon.

You are here: Home › san francisco: the freeway spirit lives?