Lanes that protect transit's speed and reliability are only as good as their enforcement.  San Francisco, like many cities, has long had a few lanes whose enforcement was so spotty as to render them advisory.  Now, the city is getting serious, with camera enforcement and significant fines.

I think another feature will eventually be necessary:  Full painting of bus lanes in the same way that we usually paint bike lanes, along with signage on approaching intersecting streets, so that there is no "I didn't 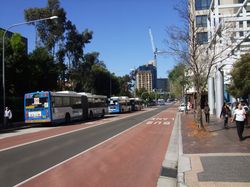 know" excuse.  Sydney, for example, paints its bus lanes deep red, with gaps at the points where cars can cross for turns.

In addition, if you approach as a motorist on an intersecting street, you will see a sign with a lane diagram

of the street you're approaching, so that there's no excluse for turning into a bus lane.  Fines (stiff) are often advertised prominently.