As longtime readers know, I would reject the claim — repeated today by Benjamin Kabak at Second Avenue Sagas — that “in fictional universes, subway systems do not have to make much sense.”  So I would not be as quick as he to excuse the incoherences of the newly announced Gotham Transit Authority Map: 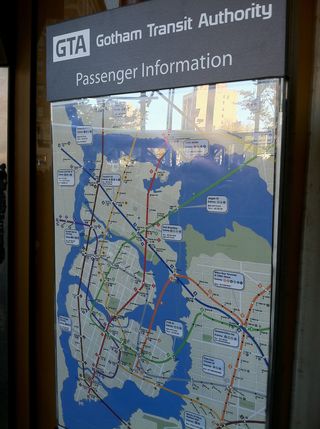 While Batman himself has other transport options, many fictional people are going to need transit to assemble the necessary crowds and populate the alleys and crevices of his plots, and those people certainly need better than this.

Perhaps I nitpick because I was raised on higher-grade science fiction and fantasy, in an era when authors felt compelled to think about every relevant dimension of their world.  In those days, you didn’t worry so much, while exploring the fictional world, that if you leaned on a tree it might collapse like a flimsy cardboard set, revealing a blank space that the author hadn’t seen fit to imagine.  J.R.R. Tolkien knew all the personalities and travails of every king for the last several millennia, and of many mythical ages before that.  You could at least expect an urban imaginer to be sure the transport system made credible sense.

Even more important than the fictional universe, of course, is the hypothetical one, where even more care is required!

Are you an aspiring science fiction writer or screenwriter?  If so, have you hired a transit planner yet?