You've seen photos like this. A large group of people, with images comparing the amount of precious urban space they take depending on the mode of transport they use.  This new one is by Australia's Cycling Promotion Fund. 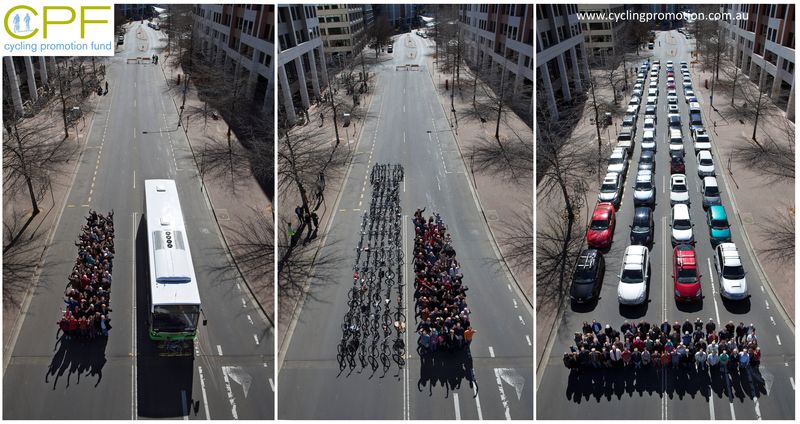 This photo makes at least three important points, two of them probably not intended.  In this one image you can see that:

The rack on the bus in pic #1 carries two bikes, which is great for those two people.  But if all the bikes in pic #2 try to get onto the bus in pic #1, we have a geometric impossibility.  Bike racks are already as large as they can be if the driver is still to be far enough forward to drive safely.  A non-folding bike inside a transit vehicle takes the space of several passengers, so could fairly be accommodated only at several times the fare.  In the ideal sustainable future, you will have to park your bike at the station, or return your rental bike, just as Europeans do.  If transit does accommodate your bike, you really should pay a fare premium that reflects the rough number of passenger spaces displaced, or the supply/demand ratio for 2-3 bike racks vs 20 people wanting to use them.

Dreamers along these lines may well be right about many suburban areas, where demand is sparse and the land use pattern precludes efficient transit.  But when all the people in this picture want to travel, driverless cars may take less space than the cars shown here, but they will still take far more space than a bus would.  The scarcity of space per person is part of the very definition of a city, as distinct from suburbia or rural area, so the efficiency with which transport options use that space will always be the paramount issue.

(Of course, this very thought experiment presumes that we will actually achieve, and culturally accept, driverless cars that require very little space between them, in which the prevention of ghastly accidents — especially with pedestrians and bikes who may appear with zero warning and minimal stopping distance — is achieved through the absolute infallibility of human-designed hardware and software.)

We spend too much time talking about what things cost in dollars and not enough about what they cost in space.  That, of course, is because urban space is perversely priced to encourage inefficient uses of it and discourage efficient ones.  If you're going to claim to be able to visualize how technology will change the world of 2040 — as the techno-futurists claim to do — you should also visualize what a political system ruled by people now under 40 would look like.  These people are much less emotionally attached to cars, care about environmental outcomes much more, and value urban space much more than their parents do.  Given that the revolution in urban pricing has already begun (see the London and Singapore congestion charges, and the San Francisco and Auckland dynamic parking systems), isn't it foolish to assume that today's assumptions about how we apportion urban space will still rule your techno-utopia?

UPDATE:  A reader points out one other key point, which is that

Once you put these three systems in motion, the cars and bus will need more space in one dimension — forward and back.  However, in motion, the mass of bikes will expand in two dimensions, it will need to be both longer and wider for all the bikes to move safely.  This could have been rectified in the photo by consciously spacing the bikes to a distance where riders would feel comfortable at a brisk cycling speed that ensures not only stopping distance but also space for passing.  Masses of cyclists on a recreational ride may all agree to ride in tight formation at the same speed, but in daily life cycling infrastructure must accommodate the the fact that people in a cycling crowd will have different desires and intentions around speed, which affects lateral spacing and stopping distance.

request for professional info: has anyone figured out how to estimate bus layover needs?
frequent service, mapped to your door

49 Responses to the photo that explains almost everything (updated!)

You are here: Home › the photo that explains almost everything (updated!)