This guest post is by my friend and colleague Stuart Donovan, with whom I've worked on a range of excellent transit planning projects over the years.  Stuart is the head of the New Zealand office of MRCagney consultants, a credentialed engineer, and the manager of numerous successful transit and transport policy research projects around New Zealand and beyond. 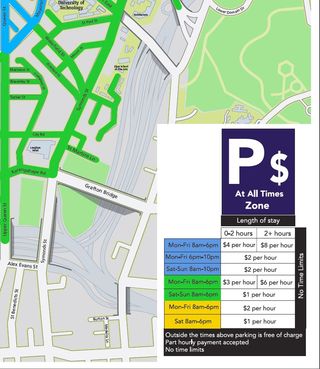 For me parking is like sex, money, and
religion – it’s one of those things you avoid bringing up in polite
conversation. The reason is that most cities have an over-supply of
under-priced parking, yet most inhabitants of those cities believe exactly the
opposite; that there is never enough parking.

Changing this belief is tough work. A large
part of it seems to reflect a common assumption that even as cities grow they will
be able to continue to provide similar levels of parking as they have had in
the past. Deeper analysis suggests this assumption is invalid.

It’s invalid because economic and geometric
realities prevent cities from expanding their parking at the same rate as they
grow. In terms of off-street parking, higher land values tend to squeeze out space-intensive
activities. In terms of on-street parking, limited kerb space and a range of
competing uses, such as bus stops, constrains the degree to which more on-street
parking can be provided.

For these two reasons, the supply of off-
and on-street parking will always struggle to keep pace with the rate that cities
grow. And of course combining constrained
supply with growing demand will
almost inexorably lead to higher prices.
This economic relationship is the main reason why larger cities tend to command
higher parking prices, other factors remaining equal.

During the 1950s many cities tried to subvert
this economic equation. They implemented regulations that required new developments
to provide large amounts of off-street parking. But minimum parking
requirements simply meant that the cost of parking was paid for by developers,
instead of users. The cost of parking was quite simply subsumed elsewhere in
the economy.

Minimum parking requirements had a number
of unintended impacts. Their primary impact was to create an over-supply of
parking and lower the direct cost of parking for drivers. In this way, minimum
parking requirements actually made a difficult problem even more challenging,
because – over several decades – they have reinforced people’s cultural
expectation for cheap parking.

Transport planners recognise that parking
is a key influence on the travel decisions that people make. Aside from access
to a vehicle, the price and availability of parking is probably the single most
important determinant of whether people choose to drive.

But what can we do to address parking issues?

Progress towards the removal of minimum
parking requirements has already occurred in a number of cities around the
world. My home city of Auckland, New Zealand (population circa 1.5 million)
removed minimum parking requirements in the city centre in 1996 and has not looked
back: More people now use passenger transit to access the city centre in peak
hour than use private vehicles.

Fewer cities have made progress, however, with
the way they manage on-street parking. Most still rely on time-limits (e.g. one
hour) overlaid with paid parking. The combination of time-limits and paid
parking creates an inconvenient situation, e.g. when your visit to the dentist
takes 2 hours instead of 45 minutes you may return to your car to find that in
addition to having holes where you wisdom teeth used to be your wallet has been
further emptied by a parking infringement.

Reforming on-street parking policies often become
bogged down in comments from residents and businesses about parking being “too
expensive.” And when confronted with such questions many parking reform
proposals die an unnatural death. But most discussions of cost focus only on
the hourly rate, rather than the cost of infringements. I would argue that the
latter needs to be included in discussions of cost, because it drastically
changes the nature of the conversation.

Until recently San Francisco was the only city
that had really forged ahead with major on-street parking reforms, under the
measured encouragement of Donald Shoup and aided by a federal transport
research grant. San Francisco’s approach to on-street parking reforms is brilliant
in its simplicity: They recognised that time-limits were a relatively inefficient
way of managing demand, especially in areas where pay parking also applied.

In most locations with pay parking, San
Francisco has sought to remove time-limits. In these areas they now rely almost
solely on prices to manage demand: If demand goes up then hourly rates also go
up, and vice versa. If you’re interested you can (and should!) read more about
San Francisco’s trail-blazing approach to on-street parking policy on the SFpark website. The most interesting result is
that revenue from meters went up, but revenue from infringements went down.

So San Francisco had effectively
substituted meter revenue for infringement revenue; and while many people hate
paying for parking, in my experience they have an even deeper hatred towards
parking tickets, primarily because it makes them feel “unlucky”. Until recently
SFpark was a lone super nova in an otherwise cold and dark parking universe.

Until yesterday when my home city of
Auckland, New Zealand announced
that it was applying to join San Francisco’s elite parking club. Auckland has followed
a similar line to San Francisco, by removing all time-limits from on-street
car-parks the city centre and instead relying on prices to manage demand. They
point to the following advantages of this approach:

One of Auckland’s interesting tweaks is the
implementation of a free 15 minute grace period, which is intended to replace the
need for so many dedicated taxi and loading zones (drop off/pick up).
Basically, with this grace period every space in the city becomes a potential
drop off / pick up space, so long as you don’t park for longer than 15 minutes,
which results in more efficient utilisation.

Overall, Auckland expects that the changes
will be broadly revenue neutral. But this hides a very significant shift in
where revenue comes from. Whereas in the current situation a large proportion
of revenue is derived from those unlucky people visiting the dentist (i.e.
through infringements), in the future revenue from parking infringements is
expect to decline, whereas meter revenue increases.

One of the less obvious benefits of the
approach taken by Auckland and San Francisco, however, is that they’ve set out an
agreed policy process for setting parking prices. That is, they have developed
a transparent formula through which parking prices are adjusted in response to
demand. This greatly reduces opportunities for public/political interference in
the setting of parking prices.

It’s now not so easy for individual residents
or businesses to demand lower prices on their particular street, because the prices
are determined by the policy. While people can seek to change the policy itself
(indeed that is their democratic right) in doing so they are at least required to
engage with broader questions such as: How
would this impact parking across the entire city centre?

The most telling sign of the broad-based
stakeholder support for Auckland’s proposed changes is the comes from the Chief
Executive of Heart of the City (business association) Alex Swney, who said:

“For many years parking has been seen as a major
reason not to come into the city. We see today’s announcement as a significant
change in approach to parking in the city.  It recognises the ‘moving
feast’ of parking demands of our businesses and their customers. It’s a major
step forward and we are sure we will be looking back in a year and see
significant improvement as a result.”

As one of the people that contributed to the
development of this policy I’m quite biased in its favour. I can’t help but
sense that this represents a big step in the direction of more transparent and
sustainable on-street parking policy in Auckland.

As someone who regularly visits cities overseas
it also makes me ask: Which city will be next?

washington dc: new network maps, with frequency!
request for professional info: has anyone figured out how to estimate bus layover needs?

You are here: Home › the price is right: market-based parking comes to new zealand (guest post)