Another great frequent network map from the prolific Steve Boland, this time of the East Bay region of California including Oakland and Berkeley . I previously covered his San Francisco frequent network here. Steve has created a series of transit maps for other cities, which can be found at his website, San Francisco Cityscape. Have a look at a small part of the map showing Downtown Oakland, below (or follow the link to view the full map): 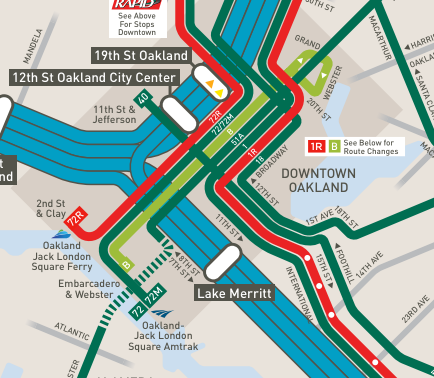 Steve's done a great job drawing a map to show routes running at 10-15 minute weekday frequencies, and uses color to draw a distinction between local and rapid bus service, BART, and several shuttle services that operate in the same vicinity.  The map doesn't try to show the more complex background of less frequent services.  The best agency maps (Seattle, Vancouver, Spokane, Portland) have begun doing thi as well.  But maps showing only the Frequent Network are also highly useful, especially for people who want to use transit but just can't afford to wait long.  That's why every Los Angeles rapid transit station has a "15-minute map", and why many other agencies (Portland, Minneapolis, Brisbane) do maps of the Frequent Network alone.  Remember: Frequency is freedom!  So a frequency map is a map of your freedom as a transit rider.