As people who value the durability of human civilization celebrate Earth Day, here's a question they might think about.

Ecological thinking values localness, smallness, and natural processes.  It talks about place, community, and the Earth as a unit.  These things are all naturally circular.  Everywhere in sustainability thinking is the image of the circle: the cycles of ecological process, the cycles of generations, the natural cycles of the earth at many scales.

So today, if you want to make any activity look durable and ecologically sound, even "cool," you draw a circular diagram of it.

But the circle is much more than a diagram of natural process.  The circle is also closure, embrace, inward-lookingness.   It is the essence of all the concentric units by which we define "home": our families, our households, and our "community" at whatever scales we choose to identify it.  What all those things have in common is that we want a boundary between "inside" and "outside."  The circle — which has the feature of enclosing the largest possible area within the smallest possible boundary — is the natural image.

Thus, in the lexicon of Australian Aboriginal art, famous for its extraordinary powers of emotive abstraction, a circle means place.

…which is why Aboriginal art so often reminds us of maps, where the same is often true.  Whatever a place is in reality, our minds think of it as enclosed,  bounded in the most efficient possible way, a circle.

So, in the absence of a strong planning ideology or natural barriers, ancient and medieval cities tend to be more or less round. 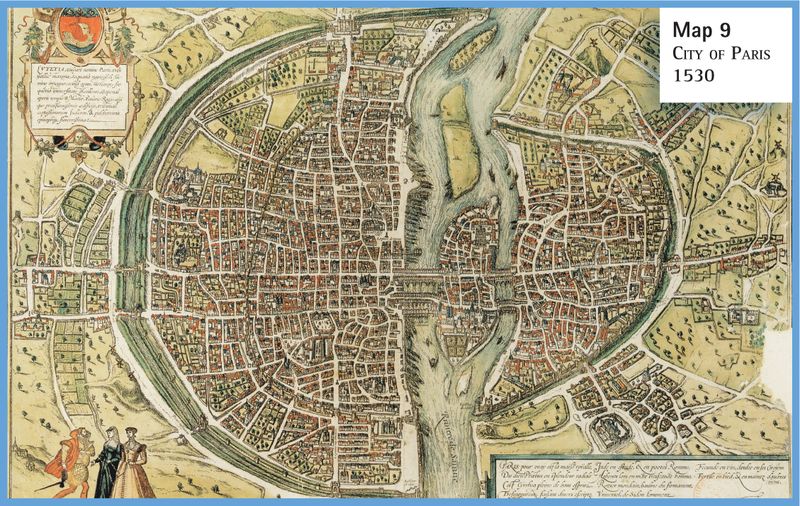 … because in addition to minimizing circumference, and hence the cost of fortification, a circle minimizes the average distance between two points within itself.

It is natural that today's green thinking, obsessed with restoring communities and cycles, thinks in circles.  The stable circular cycle is the model of success.  The successful community feels enclosing in the way that the successful family does.  It hugs you, and nothing is more circular than an embrace.

The green movement, and especially efforts at durable urbanism, knows how to talk about circles of many scales: concentric circles, overlapping circles, all kinds of circularity and enclosure.  Even the notion of downshifting technologically, to simpler systems maintanable by smaller units of organization, evokes circles.  It's intriguing that in the iconography of tech, the circle has come to mean off, while the straight line means on.

So my question is simple.

… because to do so is to define the straight line as the enemy.

Durable urbanism, and ecological thinking in general, has many enemies that are shaped like straight lines, or at least as paths that will never close into cycles.  Climate change, peak oil, war, exploitation, and pollution are not cyclical, at least not at a scale that's relevant to human life.  We see them instead as linear processes colliding with larger limits that are themselves linear, shaped like walls: competing armies, starvation, the fixed limits of the earth.

This is the story of my career:  Transportation planners — including those of us who value the goal of a more durable civilization — are in the business of trying to convince circle-lovers of the value of straight lines.  This, I've come to believe, is the core of why the conversation is difficult, and why so many people in the urbanist and placemaking professions have trouble reconciling themselves to transport needs, or even claim dominion over them.

Because face it: Transportation is about straight lines.  It begins with the desire to be somewhere other then where you are, in order to do something you want to do, and the basic shape of that human desire is a line from where you are to where you need to be.

So the history of transportation, since the industrial revolution, has been about circular communities and places feeling attacked by the straight lines that any useful form transportation must draw.  In the 1850s, Henry David Thoreau recognized the community-piercing and place-destroying role of railroads as clearly as Jane Jacobs did of freeways a century later.  The transportation technology didn't matter: what mattered was that something that had to be linear was piercing something that's naturally round: the place, at any scale.

And so, today, we have an urbanist discourse that is all about somehow taming the straight line, bending it into a circle.  A long strain of urbanism, epitomized by Darrin Nordahl's work, imagines that transit planning could be based on the tourist experience, even though tourist travel is unlike destination-motivated in this exact respect:  The tourist's desire really is a circle: the loop shape of the tour.  But all other transport is motivated straight-line desires, the need to be there so that we can do something.

So is the circle always the image of goodness for the ecological way of thought?  And is the straight line always evil?

Again, becuase it encloses maximum area in a the shortest possible boundary, the circle is the logical shape of fortification.   Our subconscious need for fortification, around our households and communities, remains with us in the form of NIMBYism – a deeply-felt revulsion at almost any change that arises from outside, whether it's urbanists rezoning your neighborhood or transport planners proposing a rail line.  NIMBYism is the walled medieval city repelling all forms of attack.  To view your community as a circle is to emphasize its separation from its context.  To view it as a point where lines converge is to emphasize its relatedness.

Can we ever treasure a process of resonance and symbosis between the circle and the path, as Aboriginal art does?  Can we experience all circularity as deepened and made richer through its dialogue with the linear? 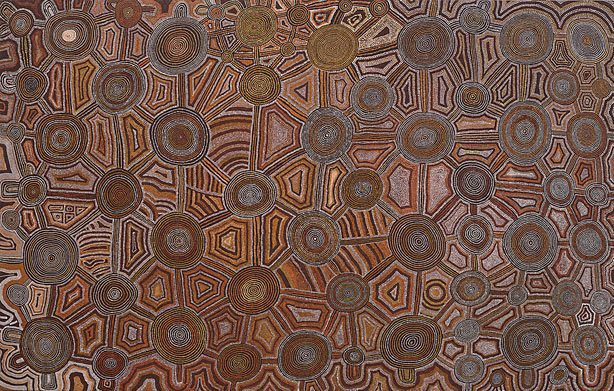 In other words:  Can the green movement — in its ecological as well as urbanist dimensions — ever welcome into its circular models the unapologetic straight line of real transportation?

You can imagine the line curving eventually, as all lines do, but locally we need lines to be straight, to get us from here to there.  Will that always feel like a violation of green principles?  Or is there a path to welcoming it into a durable world?

You are here: Home › can green thinking value straight lines?