Chicago is moving forward with an ambitious and large-scale Bus Rapid Transit project on Ashland Avenue, a north-south corridor running from Cortland to 31st parallel to the Red Line L to the east. Back in 2011, I did a post on a report from a Chicago nonprofit called the Metropolitan Planning Council on a plan for a network of BRT lines in the city. At the time, it looked like Western was the natural choice for rapid transit as the longest arterial in Chicago; following a study and outreach process on both streets last year, Ashland was chosen instead. Here is the proposed alignment, with the BRT corridor in yellow and potential future extension in black.  (It's a beautifully straight line, designed to function not just with Chicago's radial rail network but also with its grid-shaped network of frequent bus lines.) 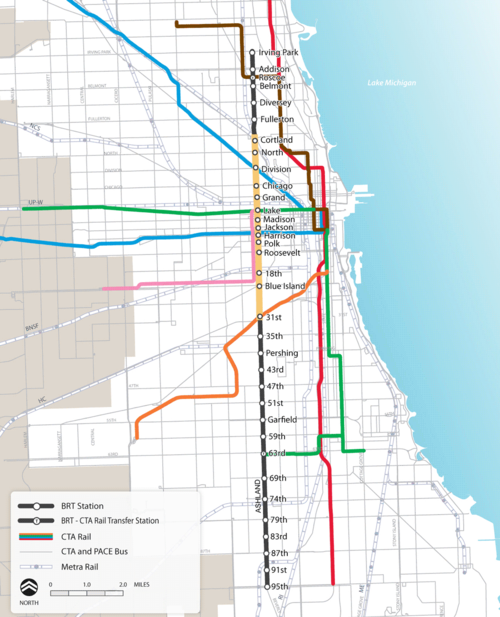 Today, the street is composed of four travel lanes, parking lanes, and a median alternating with a turn lane. It's interesting to read the press materials for this project, because they heavily emphasize the importance of the repurposed right-of-way and related improvements, rather than focusing on the character the vehicles.   They also frequently highlight the suitability of the "70' curb-to-curb right-of-way". From the Ashland BRT Project Factsheet:

The redesigned street will sport a dedicated busway with median stations, one travel lane in each direction.  As the urbanists will like, it removes a general purpose travel lane but retails the majority of on-street parking spaces. The initial Western-Ashland study considered alternatives that places the BRT right-of-way against the curb, as well as removing travel lanes or parking lanes. Ashland Avenue will also continue to be served by local bus service.

This is clearly open BRT, meaning the buses could enter and exit the busway at many points.  Ashland Avenue BRT buses, for example, are likely to want to run further along Ashland than the facility currently goes, reducing the need for multiple transfers.  An open design allows for other bus lines whose routes take them onto the busway to realize the benefits of the reserved right-of-way where it exists.   In this case, open BRT means that buses will need doors on both sides, so that they can open on the left at busway stations and on the right at ordinary curb stops beyond the busway's end.

This looks like a great project.  It's position in a high-frequency grid means that it will be useful for trips extending far beyond the busway itself.  It makes the street itself a nicer place.  And it seems precision engineered to improve travel time, and thus access, for a wide swath of Chicago, making transit an even more logical choice for an even larger spectrum of riders.

You can also view an interview with the project's lead planners, here.