Evan Landman is the new fulltime associate at my firm, Jarrett Walker & Associates.  He holds a BA in Human Geography from University of British Columbia and was formerly a planning intern for the Portland area regional government, Metro.  He tweets on transit and other Portland topics at @evanlandman.

On a recent weekend, I had the opportunity to participate in a transit scavenger hunt and race hosted by Portland Afoot, a low-car lifestyle citizen journalism outfit. Players traversed the city using TriMet to solve the mystery of "Who Whacked Ms. Faire LeSquare?", a pun on the free fare zone that until September 2012 covered Portland's downtown core and a portion of its inner eastside. 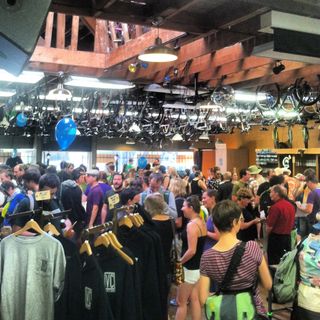 The crowd prior to the start of the race.

The event kicked off at Velocult, a bike shop and bar in Portland's Hollywood neighborhoood, near to a transit center and light rail station. Around 60 teams of 3-5 players took part; by my estimate, something like 250 people came out to spend one of the nicest days of the year so far riding transit. At times, it felt like everyone in town who writes, blogs or tweets on transit or mobility had turned up to play. One group even had members who came down on the train from Seattle to participate!

In addition to solving the murder mystery, each team could score points by visiting distant transit centers, using different modes to travel, riding multiple transit lines, spotting public art, or meeting TriMet employees. Amusingly, there were also points available for anyone who was able to get a photo of themselves being grilled by a fare inspector. The entire game was smoothly run through the clever use of unique Twitter hashtags to track everyone's progress.

I found out about the game the day before, so I didn't have time to register a team, but some folks short a player were kind enough to let me tag along. We used light rail, a number of bus lines, the Portland Streetcar, our feet, and a dragonboat to visit destinations across the Metro area, from the eastern transit center at Parkrose to the far western suburb of Hillsboro. Portland Afoot stationed volunteer actors (including one member of the city council) at different points around town to continue the story, and to provide clues and directions.

At the end of the day, the entire contingent met back at Velocult, where it was revealed that LeSquare had skipped town to Calgary (which has retained its downtown free fare zone). The organizers lined up several generous prize packages for the top three finishers, with freebies from Car2Go, Zipcar, and a long list of local retailers and restaurants. Best of all, one lucky finisher won a free one-year TriMet pass!

In the spirit of play, Portland Afoot brought hundreds of people onto Portland's transit system for trips very different than the home-work commute. This sort of event serves as a wonderful tool to get people to use transit in an unfamiliar way, and shows that riding the bus or light rail can be both functional and fun. If I can use transit to have fun on a sunny Saturday, maybe I can start to imagine other new ways I could be using the system? If nothing else, this serves as a reminder that people in Portland, including young, politically engaged people, can still get excited about TriMet despite its recent cutbacks and continual pillorying in the media.

JW postscript: I recall playing a similar game in around 1978, with a team including David Bragdon — later the elected CEO of Portland's regional government.  Just imagine how much more fun Evan would have had without a phone, computer, or realtime information, on an infrequent, confusing transit network that only went downtown!

You are here: Home › guest post: solving the mystery of portland’s missing ‘faire’