Posted on December 16, 2012 in Amusing, Technophilia 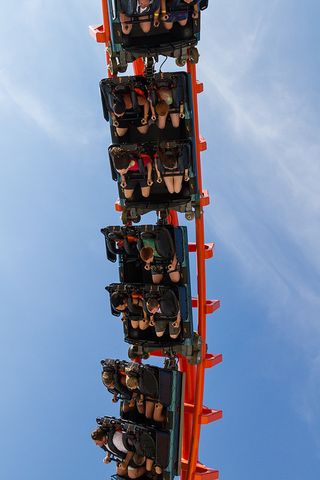 Wouldn't your life be better if you commuted every day by roller coaster?  From the technophile annals of New Scientist:

The Eco-Ride train feels like a ride on a roller coaster – and that's pretty much what it is. In a few years' time, this cheap and energy-efficient train could be ferrying passengers around areas of Japan devastated by last year's tsunami.

Developed at Tokyo University's Institute of Industrial Science (IIS), with the help of amusement ride firm Senyo Kogyo, Eco-Ride works in the exactly the same way as a theme park roller coaster. By turning potential energy into kinetic energy, it coasts along its tubular tracks without an engine. The train's speed is controlled by aerodynamics and by "vertical curves", sections of track that form the transition between two sloping segments. The Eco-Ride is set in motion and slowed at stations via rotating wheels between the rails that catch a fin underneath the train.

"Speed controlled by aerodynamics" … "vertical curves" … Sounds like the perfect commute experience after a long day's work when all you really want to do is see your partner/children/dog/bed/dinner.  And imagine all the work you'll get done on your laptop!  Will they serve coffee on-board?

The idea is that Eco-Ride will use its own inertia to get up most slopes but may on occasion need to be winched up steeper inclines.

Yes, after several paragraphs promising the ancient ideal of perpetual motion, we finally get an acknowledgment of friction.  Physics can be such a downer.

Like many technologies, this one may have some relevance, but the article is a technophile fantasy that seeks to excite us into to the point that we treat the technology's limitations as features.  Stops would be "just 100m apart" and the route is "ideally circular" — both indicators of a slow and indirect transit service that's likely to have usefulness problems.

Obviously I'm having fun here, not so much with the technology as with the New Scientist article.   This is yet another great example of "amusement park technophilia."  If you haven't thought about whether amusement park rides are good sources for transit ideas, well, my grand debate with Darrin Nordahl on this topic started here … and went on here …