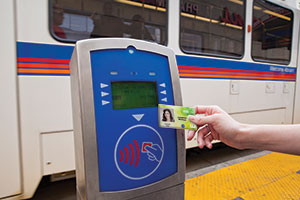 Jake Blumgart did a good article back in March summing up the current status of debate about free-fare transit.

Generally, transit systems without fares are either really small and often rural — situations where the fares may not even cover the costs of charging fares — or else college towns, where the university is often subsidizing most of the ridership anyway.  But there's the interesting case of Tallinn, Estonia.  This is a significant city and capital, population 426,000, and it's posting results:

Tallinn’s transportation department reports that traffic fell by 10 percent, meaning about 7,600 fewer cars in the city per day.

In that context, this passage from Jake's article was interesting:

All well-informed transit professionals that were contacted for their opinions spoke strongly against the concept of free fares for large systems, suggesting some minimal fare needs to be in place to discourage vagrancy, rowdiness and a degradation of service.

These experts drew on the experiences of three mid-sized American cities that briefly experimented with fare free transit. Between 1978 and 1979, both Trenton, N.J., and Denver, Colo. offered free transit during non-peak hours. In both cases, ridership increased (by 16 percent and 36 percent, respectively). The authors claim however, that these were generally not people lured from cars, but were what they call “problem riders.” In Trenton, 92 percent of transit drivers reported that their jobs were less enjoyable after the free fare program was instituted. These issues, along with revenue problems, caused both cities to discontinue their experiments after a year.

It would be interesting to see if the last 11 years have changed US expert opinion.  I'm sure it wasn't true that a 16-36 percent increase in ridership consisted largely of "problem riders," though I'm sure there were enough problem riders to be an issue.   The new riders were probably mostly people getting where they're going, and quite possibly triggering fewer car trips as a result.  And are we sure that nobody sold a car as a result of the free service?

(A significant share of transit trips by people without cars would be "chauffeured" if transit were not available; that is, someone would have made a car trip to transport the person.  This is especially true of senior/disabled riders and essential errands, which therefore count as Vehicle Miles Traveled reductions due to transit, not just social-service benefits.  Is your transit agency taking due credit for these?)

It sounds as though the authors were operating on the old binary model of choice-vs-captive ridership, under which additional ridership by people who don't own cars is assigned zero value to environmental or traffic outcomes.  In fact, the overall transit service offering (including its cost) is an important in many people's choice not to own cars.  The choice to not own a car is one of many complex possibilities that fries the circuits of algorithms (and experts) that rely on dividing all riders into boxes called choice (car owners who left the car at home) and captive or transit dependent.  In fact, we're all on a spectrum between choice and captive, and we are each in different situations that may make us responsive to small improvements in transit service or, in this case, cost.  If that weren't true, small changes in frequency or fare wouldn't cause small changes in ridership, as they almost always do.

It is likely that in the US experiments, there were enough "problem riders" to be a problem, but the obvious solution to this is Tallinn's solution, which is to require each free rider to use a smartcard, one that takes some effort to get and that can be revoked for bad behavior.

The problem with free-fare systems in big cities is not the "problem rider."  The problem is that free fares cause such a huge ridership increase that no big-city US transit agency could possibly fund enough service to handle it.  It would not just require the purchase and operations funds for hundreds if not thousands of new buses (and new facilities for them to be housed and maintained).  It would also quickly require whole new rapid transit lines.  Most of our current modelling of rapid transit in the US assumes that fares will continue to hold ridership down.

So yes, free fares would be a big deal in big cities (though not as much for small ones).  They are a huge barrier to cross, especially for impoverished US transit systems in major cities.  They would require a transformative degree of new public investment.  All that must be debated.

But don't let the "vagrants" scare you.

“running transit like a business”: digging under the slogan
san francisco: my piece in sunday’s chronicle

27 Responses to rebutting the “vagrancy” argument against free fares

You are here: Home › rebutting the “vagrancy” argument against free fares