Salem, Oregon (metro pop around 200,000) is typical of a lot of small cities in America.  It's a state capital and has some small universities, which help keep its downtown focused, but it's not an enviro-utopian place like Boulder or Eugene, nor is it besieged by demand for massive urban density like the bigger west coast cities all are.  This is a town that much of North America could recognize as familiar.

I love working on tranist in big cities, but I also love working in small ones.  Often, it's easier to get things done.

So I'm proud to announce that the local transit agency, Salem Keizer Transit has released for public comment a major reworking of their transit network, one that we helped them design.  As usual, red means every 15 minutes all day, blue is every 30 and green is every 60.  Here's the new network on the left, and the existing network for comparison on the right. 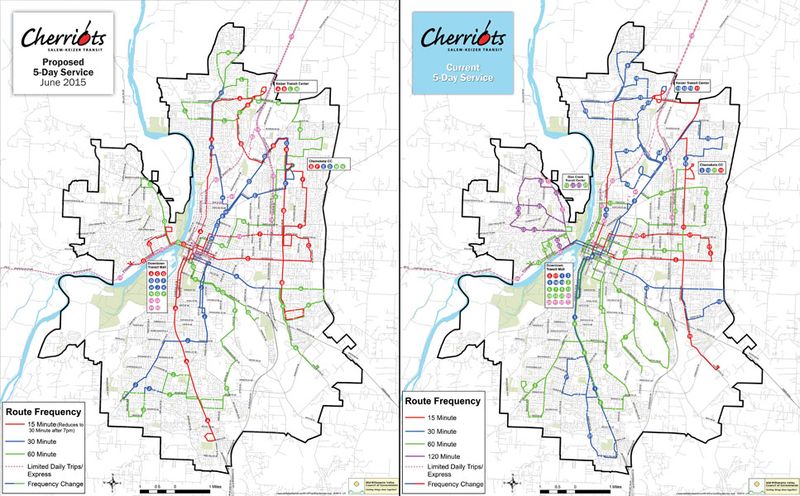 The themes are familiar if you've followed other work of ours, in Columbus, Houston, or Auckland, New Zealand.  There's more high-frequency service (red) which means more places where transit is useful to people in a hurry.  The spacing of nearby routes is more even, so that walking distances are more uniform.  Sometimes service has been eliminated to extremely low density areas, such as parts of the west side of Salem in this image, where existing service is logging fewer than 10 passengers per hour of service.

This doesn't mean that you shouldn't have low-ridership services to low-demand areas, but only that the community, acting through the transit agency Board, needs to decide how to balance ridership goals with competing goals that require low-ridership service, such as perceptions of equity and lifeline access for people who are extremely dependent on transit.

Salem is interesting in that the city's geography really limits the possibilities for a high-frequency grid.  The arterial pattern is a starburst, many streets going downtown in different directions but very few streets that are useful for running perpendicular those streets.  Thus Salem continues to have only one frequent crosstown — along Lancaster Drive — but the plan works toward expanding that crosstown so that more non-downtown trips can be made that way.  Otherwise, this remains a strongly radial plan for a strongly radial city.  Salem has done better than many cities at keeping its major institutions, including its biggest university, all clumped in a small area of greater downtown, where most of the transit sytsem goes.

The bigger story, however, is that freestanding cities of Salem's size are big enough to do interesting things with transit, and to build services that are useful enough that some people will make location decisions in response to them.  That's the essence of how a city's form becomes more sustainable over time.

You are here: Home › Expanding liberating transit in small cities