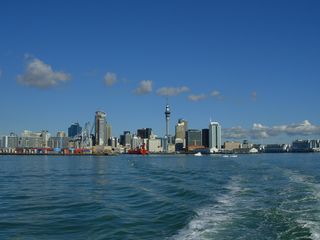 Are you a professional transit planner with 3+ years experience and a commitment to breaking through old paradigms and raising the standards of the profession?  If so, my New Zealand colleagues at MRCagney may be looking for you.  They are open to hiring from worldwide, so if you've ever dreamed of living in New Zealand, this may be your chance.   Here's the listing.

I have a keen interest in this hire, because I'll probably be working with this person!

MRCagney is small and focused sustainable transport firm with offices in Brisbane, Sydney, Melbourne, Auckland, and Singapore.  Built around a group of former transit agency executives, it now does a range of work but is closely associated with BRT, bus network design, and public transit management, with many projects across Australia, New Zealand, Southeast Asia, and the Middle East.

I worked for them fulltime for five years when I was based in Sydney (2006-2011), and I'm still on their payroll part time, helping out with the occasional network design study.  In 2012, for example, I worked with them on a redesign of Auckland's bus network, which is being rolled out over the next few years, and we did a similar project in Darwin earlier this year.   MRCagney is really the Australia-NZ firm for cutting-edge transit planning, which is why I stay involved with their work as much as I can.   I like to think I've had some influence on MRCagney's transit planning values, so if you like what I've written on public transit, and have your own ideas about how to put these ideas into practice, that's probably an advantage!

Please pass this on to other professionals who might be ready for an adventure Down Under.  It's an exciting time to be a transit planner in that part of the world.

climate change made simple, by xkcd
Transitmix: a new tool for armchair transit planners (and pros too?)

You are here: Home › for the right transit planner, a dream job in new zealand!