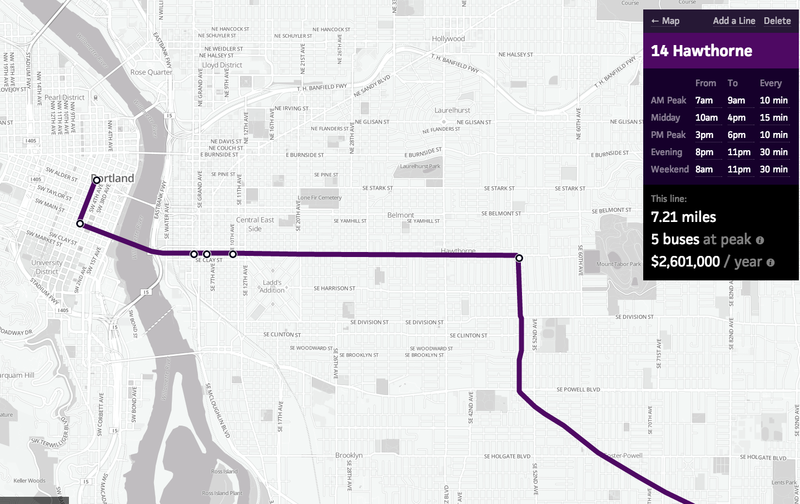 Another interesting web transit app, this time from a group of Code for America developers:

Transitmix is a sketching tool for transit planners (both professional and armchair) to quickly design routes and share with the public.

Transitmix is simple way to think about transit in terms of bus requirements and real costs. Basically, the user draws a route on a map and plugs in span and frequency. The app then calculates a vehicle requirement and cost in both hours and dollars, factoring in an adjustable layover ratio, average speed and dollar cost per service hour. 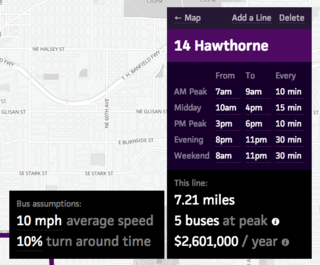 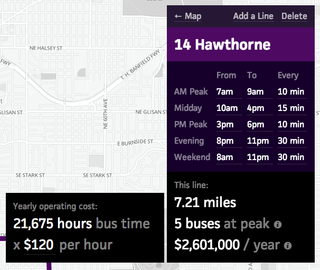 Transitmix is very similar to (though much simpler and prettier) the sort of cost estimation methods used in transit design processes , and as it stands is a fun sandbox to think about transit in your city. It's still very much a beta, but the prospects are intriguing.

Its clear that the developers of Transitmix see it as much more than a curiosity. They've actively sought feedback from people in the industry, and are working hard to build an app that could one day replace some of the tedious documentation work of network design with an interactive, visually attractive interface. Apparently functions like summary tables, GIS file exports, and the ability to save multiple iterations of one design are all in the works.

I can imagine all sorts of possibilities for a tool like this, particularly if secondary data sources were incorporated. How about a public or stakeholder  involvement process that would actually give people a way to view demographic and ridership data and make real, financially constrained transit choices with a familiar, modern toolset? Or an update to our transit network design courses, where participants are given the same information for a fictional city and asked to design a transit network from the ground up? It's great to see transit concepts picked up by a talented group from an organization as reputable as Code for America. A project worth keeping an eye on!

20 Responses to Transitmix: a new tool for armchair transit planners (and pros too?)

You are here: Home › Transitmix: a new tool for armchair transit planners (and pros too?)