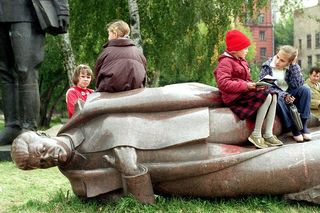 Is "reduced congestion" a positive environmental impact in cities?  Is it good for the environment to have endless lanes of free-flowing traffic everywhere?

It's a bizarre claim when you look at how prosperous, sustainable, and livable high-congestion cities are.  (They tend to be places where you don't have to commute so far, by example, and their overall emissions tend to be  lower.)

Yet until now, all California transit infrastructure has had to conform to an analysis process that treats traffic congestion as a threat to the environment.  A metric called Level of Service — congestion experienced by motorists, basically — could not be made worse by an infrastructure project, even one whose purpose was to reduce the impact of congestion on the economy, by providing alternatives to driving.

Thanks to a state bill nearing approval, this provision of the California Environmental Quality Act — which has caused years of delay and cost-escalation on transit and bicycle projects — will no longer apply to urban transportation projects or to much transit oriented development.  Eric Jaffe's long article today from the barricades of this revolution is a great read.  Key quote:

Level of service was a child of the Interstate Highway era. The LOS concept was introduced in the 1965 Highway Capacity Manual, at the very moment in American history when concrete ribbons were being tied across the country, and quickly accepted as the standard measure of roadway performance. LOS is expressed as a letter grade, A through F, based on how much delay vehicles experience; a slow intersection scores worse on LOS than one where traffic zips through. Planners and traffic engineers use the metric as a barometer of congestion all over the United States.

In California, LOS has an especially high-profile. As the primary arbiter of traffic impacts under CEQA—adopted in 1970 by Governor Ronald Reagan—the metric not only determines the fate of many transportation and development projects, but has the awkward role of promoting car use within a law designed to protect the environment. "We have one section of CEQA saying we've got to reduce greenhouse gas emissions," says transportation consultant Jeffrey Tumlin of Nelson\Nygaard, "and another section of CEQA saying we need to accommodate unlimited driving."

Level of Service is an example of rhetoric that we all have to learn to challenge: the effort to hide strong value judgments inside language that sounds objective or technical.   A key move is to rely on terms that sound vague, neutral, and boring ("Level of Service") to describe something that's actually expressing a strong ideology — in this case, asserting the superiority of some street users over others.    If the Level of Service Index had been called, say, the "Free Flow of Cars Index" it would have been much clearer who was being excluded by it, and how blatantly it contradicted many other widely-shared goals for California's cities.

Tip:  If a term sounds vague, neutral, and boring, demand a precise definition.  Confused words imprison our minds.   You'll be called a geek for caring about something as boring as "Level of Service," but in the end, you may help topple a tyrant.

Photo: Children with toppled statue of Stalin.   The Times.

9 Responses to california topples a tyrant

You are here: Home › california topples a tyrant