Posted on September 25, 2014 in Urban Structure

Here's an interesting chart!  It's from a study of commute times in Brazil, but there are enough world cities to make it interesting. 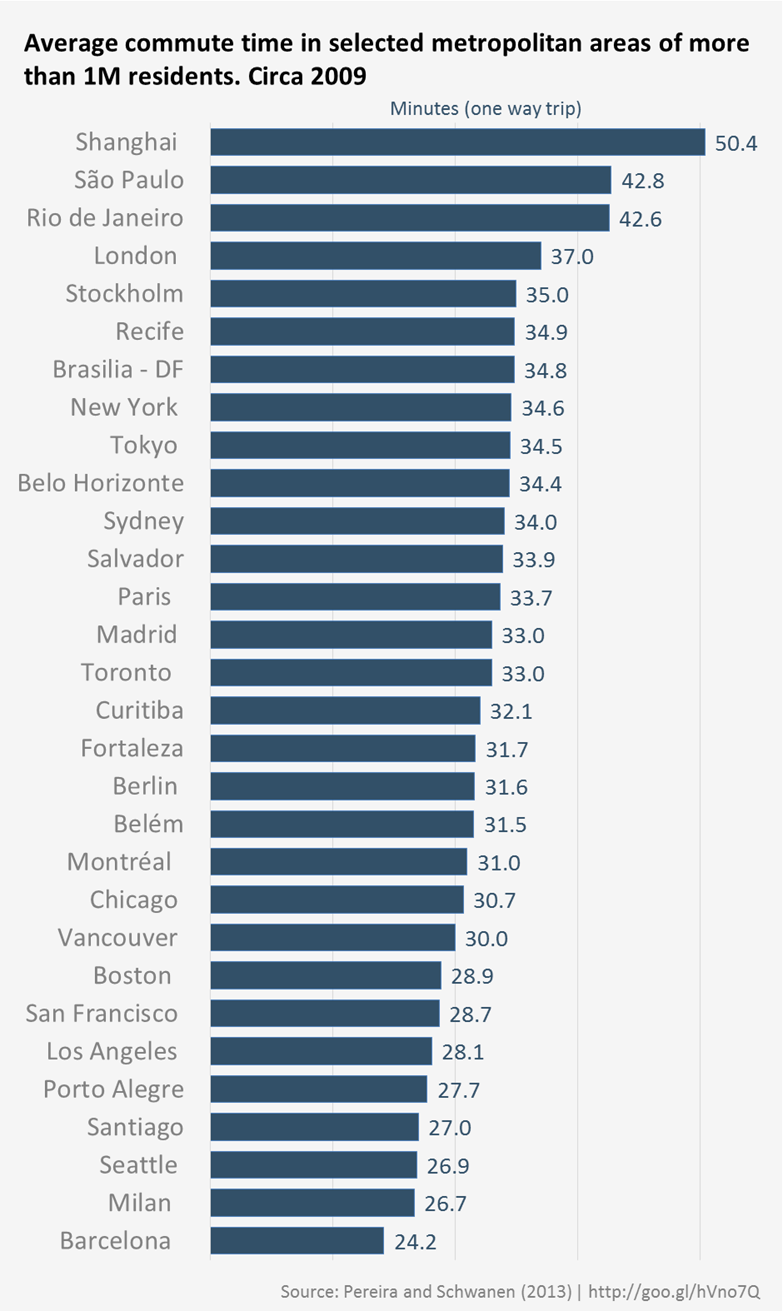 1.  Viva Marchetti's constant!  There are interesting academic debates around the edges, but the persistence of the 30-minute one-way commute, and especially the few cities with averages much less than that, echoes the observation of Marchetti and others that this seems to have been a tolerable daily travel time across both many centuries and many cultures.  Average commute times in cities don't seem to get much below 30 minutes because most people don't seem to value such short commutes.  But in highly dysfunctional cities they can get much longer.

2.   The organic "planning" of many Brazilian cities is producing better outcomes than the alleged orderliness of Chinese planning.

3.  Despite the common whining about traffic in both places, the California metros are in good shape.  Los Angeles in particular sings the advantages of a decentralized urban structure that gives many people opportunities to live near their jobs, one that can be easily adapted to successful transit-walk-bike mobility.

4.  Conversely, dominant and fantastically wealthy central cities (London, New York) are bad for commute times  because so few workers can afford to live close to them.

5.   Aestheticist master planning in the car era was really bad for commute times, because it tended to create building-in-park arragements that are just toxic to both transit and pedestrians.  Like many capital cities that were planned to symbolize rather than function, Brasilia excludes too many pieces of a necessary economy, spawning a vast and disorganized fringe where commute times are even longer than in more organically grown Brazilian cities.

(Don't get me started about Australia's master-planned capital Canberra,where I've done a great deal of work over the years.  While I love Canberra for a lot of reasons, it took a lot of planning effort to get less than 400,000 people spread out over an area that's 37 km (23 miles) long, insuring long commute times for most of the population.)

Oh, and this chart demonstrates one other takeway:  If you write studies or consulting reports for a living, make sure that everything someone needs to know to understand a graphic is in the graphic, not in adjacent text.  As here, graphics quickly throw off the shackles of context to make their own journeys across the web, confusing or enlightening people depending on the wisdom of the designer.

You are here: Home › reflections on world commuting times