(Updated with final version of map.)

From Ilya Petoushkoff in Moscow, explaining this remarkably beautiful map (download this draft version here, or the final version here): 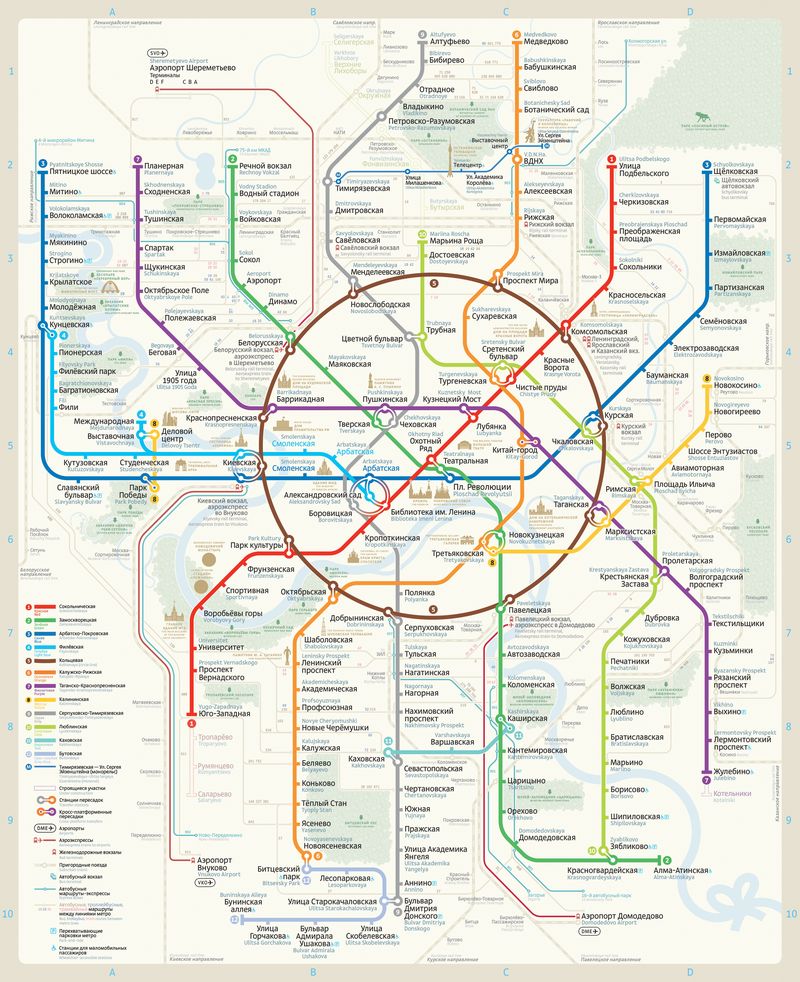 Here I'd like you to see a beta-version of a result of a zillion-year struggle.  Moscow finally is going to have a transit map with not only metro, but also regional rail and bus/trolleybus/tram connections between adjacent metro lines.
From the beginning of 20th century and till nowadays there hasn't been any kind of common map. Presently we still have a metro-only map inside the whole metro system, and regional-rail-only map inside some 30-50 percent of all regional trains …. Even the transfers between metro and rail are not announced on the trains! Until 2010s, city politicians simply didn't understand that it is a significant problem, many of them believed in 'who the hell will have a ride on a regional train when we have our metro'.

Sounds like the conversation Paris had a decade or so ago.  Many US cities are just starting to think about how regional commuter rail can be repurposed to form useful links within the core city.

Most of the city inhabitants … are not aware … that many destinations in the city are covered with regional rail services.  Now it's to be that everyone finally becomes much more familiar with what our transit is capable of.
The regional rail trains are quite frequent, running from 4 a.m. till midnight with a frequency of 6…10 [trains per hour] (sometimes more) and a strange 'technical daylight break' between 11 a.m. and 1 or 2 p.m. (except Sat.& Sun.), when there is no service at all.

Sounds like one of those clauses that make labor contracts such a dramatic read.

This very map is extremely important, finally bringing citizens and authorities to the fact that city has much more lines of rapid rail than those 12 of the metro system, and the regional rail should be developed as soon as possible, while certain areas of the city do not need new metro lines at all, they already do have rails and trains to use. …
Also the interesting fact is that connecting services between metro lines have been put onto this map. Many people are just unaware … that they don't have to stuff themselves into metro and have a ride to the center and backwards to get to adjacent lines, stations and city areas. Now it's a first significant attempt to make it clearer.

The color codes on those links are about technology, rail/bus/tram, but of course those don't tell you which is fastest.  Frequency, I'm assured, is not an issue, as all of these services are frequent.
Still, I perused this map with great pleasure, and respect it not just as a clear diagram but a work of art.

quote of the week: “rail is only part of the equation”
no, autonomous cars will not “abolish transit” in dense cities

8 Responses to email of the week: a new map for the moscow metro

You are here: Home › email of the week: a new map for the moscow metro