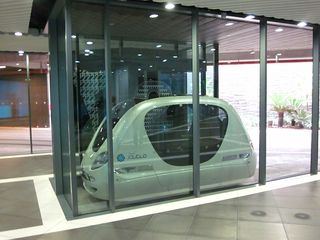 Remember Masdar, the car-free neighbourhood in Abu Dhabi that was going to show the power of "personal rapid transit" (PRT)?

I just received this interesting letter from Luca Guala, a transport engineer in Italy:

Let me introduce myself. I am a transport planner and I am partner of a consultancy Company named MLab (mobilitythinklab.com), based in an obscure corner of Italy. Nothing to brag about except that I have had the chance to participate in two very interesting experiments that concerned automated, driverless vehicles: the Masdar City "Personal Rapid Transit" “automated taxi” transit system and the CityMobil2 experiment with automated minibuses in a mixed setting.

In 2006, I proposed to London’s architects and planners Foster & Partners to choose PRT as a sustainable, non-polluting transport system in their bid for Masdar City’s masterplan (which they won).

To make a long story short (my involvement in Masdar City lasted 3 years) we soon realized that the dream of using “automated taxis” as a mass transport system often resulted in… queues of taxis at pick up points!

Even though the “podcars” are the size of an European or Japanese mini city car (Citroen C1, or Toyota Aygo for example) but seats 4 people in full comfort and up to 6 rather uncomfortably, they still took up so much space, that we found ourselves at a bifurcation: capacity or space? Should we give up some capacity (and find something else to provide the peak) or enlarge the transport infrastructure beyond our desires, and what was healthy for a city? A well known dilemma for any transport planner…

We then tried a “group rapid transit” strategy, as opposed to “personal rapid transit”: timing the podcars to travel at fixed intervals and on fixed routes at peak, so that they could fill up on most requested routes. This strategy did work, although the capacity almost tripled, it was not that of true mass transit (but in densely built Masdar City there was no room for big mass transit) but then the economic crisis arrived, the plan was dramatically downsized etc. etc.

Bottom line:  When "personal rapid transit" succeeds, it succeeds by turning into a conventional fixed route transit system.  The fantasy of "personal" transit is that a vehicle will be there just for our party and take us directly to our destination, but in constrained infrastructure this only works if demand is low.  But PRT was meant to the the primary transport system in a car-free city, so demand would be high.  It was never going to work.

Luca takes on driverless taxis in part 2 of his letter, coming in the next post.