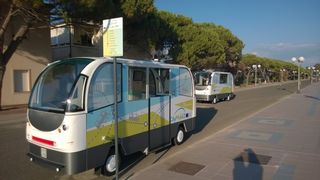 Part 2 of my letter from Luca Guala, of the Italian consulting firm Mobility Thinklab.  (Part 1, on personal rapid transit, is here.)

Last summer, we tested driverless minibuses along a route of 1.3 km on a pedestrianized boulevard in Oristano, a small town in Italy. The idea was to test driverless vehicles mixed with traffic.

Why minibuses and not taxis? Firstly, because it is much simpler to teach a robot to follow a fixed route, rather than teach it to go anywhere the passengers want to go. Such a system is already operational in Rotterdam (2getthere.eu/projects/rivium/) and it works well, but it has one drawback: the tracks are segregated and they represent an ugly severance in the urban tissue.

But if the vehicles are allowed to run with cars cyclists and pedestrians, a public transport route can be “adapted” with unobtrusive measures to accept driverless vehicles, and the people sharing the road will quickly learn to live with them. The main problem here was not technical, as legal.

Hence the idea of testing similar vehicles in an open field mixed with pedestrians. The first test we did had mixed results, the second test that will be done in La Rochelle, France this winter will take advantage of all that we learned in Oristano.

So what did I learn from all of this? That driverless cars very likely have a bright future, but cars they will always be. They may be able to go and park themselves out of harm’s way, they may be able to do more trips per day, but they will still need a 10 ft wide lane to move a flow of 3600 persons per hour. In fact, the advantage of robotic drivers in an extra-urban setting may be very interesting, but their advantages completely fade away in an urban street, where the frequent obstacles and interruptions will make robots provide a performance that will be equal, or worse than, that of a human driver, at least in terms of capacity and density.

True, they will be safer (especially because the liability for accidents will be borne upon the builder) and a robotic traffic will be less prone to congestion (I envision robotic cars marching orderly like robots, packed at 1.5 second intervals, while their occupants fume wishing they could take the wheel perfectly aware, but not at all convinced that their robocars are more efficient drivers than they are – or worse, they DO take the wheel overriding the … robots!), but I do not expect driverless cars to dramatically increase the capacity of a lane to transport persons.

Driverless buses, on the other hand offer an interesting feature: the human driver is no longer needed, removing an important cost and several constraints.  This allows them to serve efficiently and economically low-demand routes and time bands, while allowing [agencies] to concentrate the number of manned buses on high demand routes at little added cost.

I take all this automation talk with a grain of salt still, as I don't think we've begun to explore the human response to it.  But Luca is right about the key point:  driverless buses are a much easier problem than driverless cars, and their space-efficiency will continue to be crucial in busy corridors where even driverless cars will add up to gridlock.

Luca's last paragraph suggests that driverless buses will start with smaller vehicles in simpler situations, which is a possibility.  But of course, once the concept is proven, the economics of driverlessness will create pressure to bring the technology to big buses.  The same logic is also driving the movement to run fully-grade-separated without drivers, on the model of Vancouver, Dubai, and Paris.  The logic of driverless trains is easy: with automated train controls systems there is really not much for a driver to do in non-emergency situations, and these cities have found that those tasks are easily automated.  We are all used to small systems of this type, because we encounter them in large airports.  The driverless bus in traffic is a harder problem, but we will have solved all of those problems if we ever develop driverless cars.  In fact, the problem of the driverless bus, which never goes into alleys or minor streets, should be considerably easier, since navigation turns out to be one of the biggest challenges for the driverless car.

Note also that the challenge of planning for driverless cars is not in envisioning a utopia where they have complete dominion over the street.  The future must be evolved, which means that we must plan for the interim state in which some cares are driverless and most aren't.  That is a situation where driverless buses could thrive, because they will be competing with something that — in terms of poor capacity utilization — resembles today's traffic on major streets, not a world optimized for the driverless car.

As Luca indicates, we know what the problem with driverless transit will be: long fights with labor unions who feel entitled to cradle-to-grave  security in a single job.  It will be one more kind of automation that requires people to retrain and to participate in a more complex and competitive economy.  In an ideal system, many drivers would be replaced by support jobs such as fare inspectors and roving problem-solvers; as on Vancouver's SkyTrain.  This seems to be what Luca is envisioning when he speaks of the continued need for "manned" services.

But the real result of massively abundant transit — which is the real point of the large driverless bus  – will be massively more opportunity for all kinds of innovation and commerce to happen in a city,  unconstrained by the limits of car-based congestion.  That's a wrenching change, and I am as adamant as anyone about the need to protect workers from exploitation.  But in the long run, over a generation or two, the outcome will more interesting jobs for everyone.  Bus drivers shouldn't encourage their children to go into the same profession with the same expectations, but that's true of many jobs — perhaps even most jobs — in this rapidly changing world.

23 Responses to Luca Guala: driverless buses will be more transformative than driverless taxis

You are here: Home › Luca Guala: driverless buses will be more transformative than driverless taxis