Silicon Valley is easily viewed as a  car-oriented place, where tech giants rule from business parks that are so transit-unfriendly that they have had to run their own bus systems to bring employees from afar.  But one interesting transit project is moving forward: the El Camino BRT, a proposed  rapid transit line connecting Palo Alto and central San Jose.

El Camino Real ("the Royal Road") is a path defined by Spanish missionaries as they spread north through California. It lies close to the old railroad line now used by Caltrain, and the two facilities combined  determined the locations of the pre-war transit-oriented downtowns that still form the most walkable nodes in the area.

Today El Camino is the spinal arterial of the San Francisco peninsula, passing through or near most of the downtowns.   This spine continues across Silicon Valley, through Palo Alto, Mountain View, Sunnyvale, Santa Clara and finally downtown San Jose.   (The BRT will not extend the full length of the peninsula, because it is a Santa Clara County project and the county ends at Palo Alto.  However, successful projects do get extended sometimes.)   In Silicon Valley, too, the corridor is far enough from Caltrain that they are not competing.  Caltrain will always be faster but probably less frequent than the BRT, optimized as it is for much longer trips including to San Francisco.

In land use terms, the project corridor is ideal territory for transit – lots of employment and commercial destinations, with strong anchoring institutions at each end.   But while the path is historic, the modern street was designed with a singular focus on auto travel time, as a six-lane divided boulevard. Auto and transit travel times continue to increase substantially as more people come to live and work in the corridor, and even more population and employment growth is forecast for the coming decades.

Santa Clara VTA and the FTA released the Draft Environmental Impact Report for this project last week, detailing multiple alternatives relating to the extent of dedicated lanes and street configurations. The purpose and need statement tidily summarizes the rationale for this investment:

El Camino Real is an important arterial in Santa Clara County and on the San Francisco Peninsula. However, El Camino Real is predominantly auto-oriented, and streetscape amenities are limited. There are widespread concerns regarding congestion, appearance, and safety, and a general public perception exists that the corridor is not well planned. Exacerbating current conditions, Santa Clara County is expected to experience substantial growth in the next 30 years from 2010 to 2040. If no improvements are implemented, heavy demand will potentially be placed on the existing transportation infrastructure, which is planned to increase by only 5 to 6 percent.

This striking graph (which I couldn't locate in the report itself, but which is reproduced over at the TransForum blog), compares transit travel time among the four alternatives:

In the A4c alternative (the alternative with the greatest extent of exclusive lanes), a trip during the peak through the corridor would actually be faster on transit than driving, and dramatically faster than the same trip today.

The various alternatives' alignments are compared below: 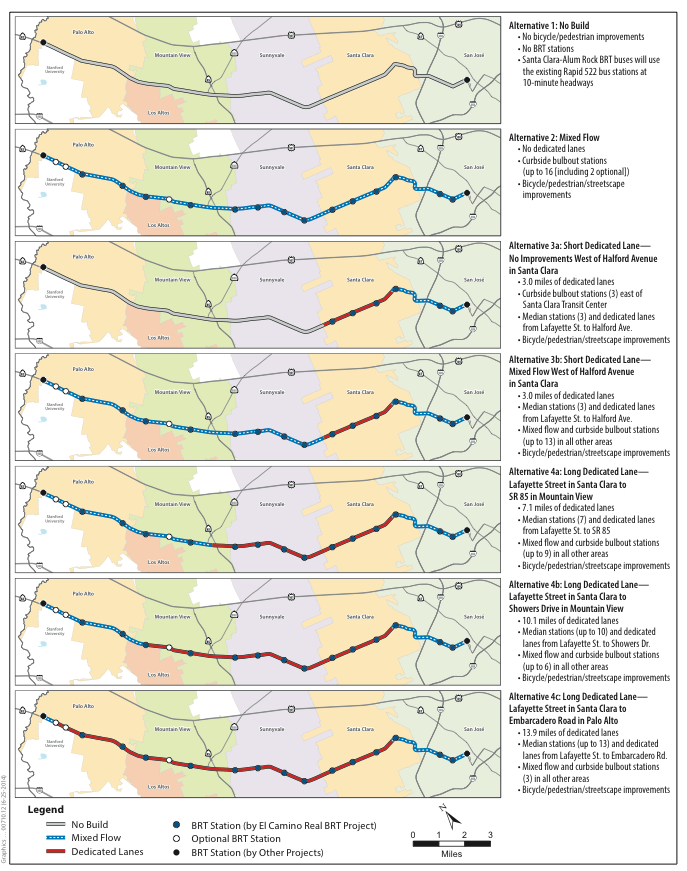 As usual with arterial BRT in the US, there will be some mixed-traffic segments, and the line will only be as realiable as its least reliable point.  Note that the alternatives seem to envision different responses to city limits, as though anticipating that as you get further west (which means wealthier, but also closer to big destinations like Palo Alto and Stanford University), support for exclusive lanes will decline.  It will be interesting to see if this is true, in a very educated polity, when the benefits are understood.