Any large transportation infrastructure project involves the temporary inconvenience of construction. While a new rail line or viaduct might be a lasting asset for a city, and one that continues to be useful for decades to come, short term impacts can prove disastrous for people involved in commercial activity around the construction zone, and disruptive to neighborhood residents. In some cases, business owners have even been driven to legal action by this issue. Part of the problem is that for the duration of construction, inconvience, noise, and rubble can come to define perception of the corridor where work is being done. 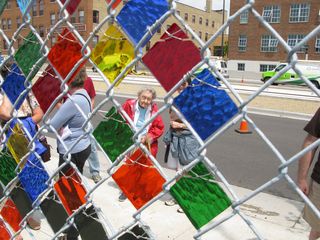 However, disruption can also be an opportunity. In St. Paul, a local nonprofit called Springboard for the Arts led an initiative ("Irrigate") to try to respond to the construction of the Central Corridor Green Line and support local businesses and neighborhoods through a placemaking approach. Irrigate provided hundreds of artists with training and funding to do small projects in neighborhoods along the corridor in collaboration with business owners and neighborhood groups. This grant-funded program was specifically oriented towards improving business and neighborhood viability.

A program like this can help to mitigate construction impacts through direct financial stimulus to artists, indirect support for businesses through those artists' projects, and a high level of media visibility that can change the conversation or perception about a place. Irrigate's goal was for the story of the Central Corridor to be about arts, thriving businesses, and healthy neighborhoods, not the inconvenience of being in a construction zone.

As a City of St. Paul policy director puts it in an independent audit of the program:

While the City of Saint Paul tried feverishly to garner positive coverage for the benefits of transit that the Central Corridor would bring to the community, their positive message was consistently diluted in the media by negative stories about the impact of construction. As Irrigate projects began popping up along the Corridor in unexpected ways, the disruption of the many small projects quickly had a surprising impact. The magic of art started a different conversation, something that couldn’t have been predicted  but was such a blessing. Irrigate’s public process engaging artists from the community to support local  businesses provided a nimble and creative way to influence the narrative and change community  perceptions of the value of community development. Irrigate’s approach taught the public sector that  sometimes it’s alright to let go of the bureaucratic process to allow for a more organic process of  community engagement.

Here, "placemaking" doesn't mean a bench or a mural; those are tactics. With Irrigate, placemaking was sustained investment in this corridor over a period of years, supporting hundreds of projects.

Apparently, Irrigate has been successful enough for Springboard to create a toolkit to duplicate the progam elsewhere; according to one piece, it's already in use in Cleveland and Mesa, Arizona. Transit agencies could learn a lot from this example when laying the groundwork for their projects. While the work that Springboard did here is probably outside of the capabilities of most if not all agencies, building connections to foster this type of action prior to a big project could prove to be a prudent investment.

Image: Springboard for the Arts

You are here: Home › mitigating construction impacts through placemaking in St Paul (video)