A recent post discussed Jeff Howard's hotels near transit maps suggested looking at Google Hotel Finder, a utility tucked away within Google Maps that purports to help you find a hotel based on travel time from some location. A user plops a pin on the map, and the tool draws isochrones based on drive, transit, and walk times, which supposedly show you the area of the city where hotels are within that travel time of your destination. 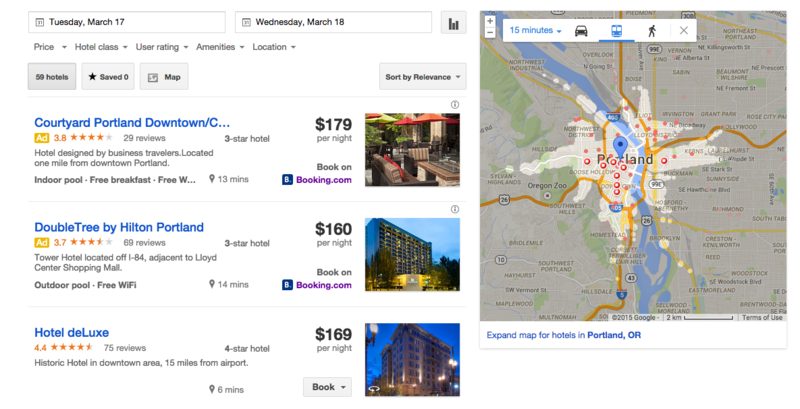 So far, so good – I put a pin in downtown Portland, and Hotel Finder shows me a big blob in the center of the city that I can get to by transit within 15 minutes. It looks like there will be lots of hotels I can choose where I can quickly take transit into downtown. However, when we look a bit more closely, we can see a big problem with Google's approach.

In this image, I have moved the pin to a corner near Reed College in Southeast Portland. This is a residential area bordering a low-density industrial district and the campus and fields of a small, exclusive liberal arts college. It is served by just one bus route, the 10-Harold, every 30 minutes. Yet according to Google, from this location, I'm just a short 15-minute trip from outer East Portland, or the inner Eastside Industrial District.

The problem here is that Google is providing an isochrone of transit access that does not consider frequency, i.e waiting time.  They assume that the bus shows up right when you need it..

Once I'm on the Harold bus, it's true that I might be able to take it from 28th far out into the east side in just 15 minutes. But depending upon when I arrived at the stop, I could wind up spending up to 45 minutes making the trip. If we assume an average wait of 15 minutes, or half the headway, the area shown by Google as within 15 minutes of the pin is actually more like 30 minutes!

Imagine you are a person who is coming to a city for business, and you picked a hotel expecting to be able to travel to your meeting by transit in just 15 minutes. Yet when you walk out to the stop, or check a trip planing app, you find that you will wait longer than that just to catch the next bus! You might be late to your meeting, and the tool you used to pick the hotel would have failed to direct you to accommodations that met your desire to be a short transit trip from work.

A more useful version of Hotel Finder would add waiting time. This would alter the isochrone in response to frequency, and more accurately show the area (and hotels) within a short transit trip of the desired location.

We are surprised to see this kind of misleading info from the crack team at Google Transit.  In presenting transit travel times that don't consider waiting, they are talking about transit as though it worked just like cars, doing a disservice to everyone who wants to consider transit when the choose a location.

London and Dublin: open to ideas
London: If you make buses wonderful …

13 Responses to How do I find a hotel near good transit? Not (yet) via google!

You are here: Home › How do I find a hotel near good transit? Not (yet) via google!