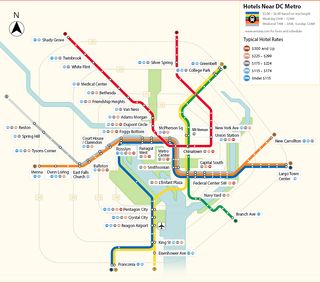 Here's news you can use, or at least news I can use as an absurdly frequent flyer.

All of the standard travel shopping sites make it very hard to assess the transit options from a hotel's location.  At most they have distances and sometimes car travel times.  So I often spend too long doing research, and pay too much for a hotel close to my destination when I might easily have stayed further away more cheaply if I knew good transit was there.

This, therefore, is a really good tool.  In the case of Washington DC, it helps you see all the hotels that are close (objectively close, not hotel-marketing-close) to a subway station.  It's the work of Jeff Howard, and he's also done one for Atlanta's MARTA subway.

You can get hints of similar output from Google, very crudely, by pointing Google Maps at a city and then specifying, say, "hotels near a DC Metro station," but Google is easily confused by excessively clear requests, and to Google, "near" means car-near, not transit-near.  Someday, maybe Google will understand "hotel within 400m of a frequent transit stop," or even "hotel within 30 min frequent transit travel time from ___".  But that's clearly a way off, and Google often seems more interested in interpreting vague search requests than replying to clearly stated ones.

In any case, even a competent search engine wouldn't produce Jeff Howard's very useful feedback about hotels.  Click on a station and there's a writeup about each station area, including a map showing the hotel's exact relationship to the station, and links to the hotels themselves, including a reservation widget.  Nice work, Jeff!

My interview on National Public Radio
London and Dublin: open to ideas

11 Responses to How do I find a hotel near good transit?

Home › Atlanta › Legibility › Washington DC › How do I find a hotel near good transit?