On the inevitable problem of curb bike lanes interacting with bus stops:

Generally, transit advocates are also bike advocates, but with regular on-street bike lanes, this conflict point becomes an unavoidable ally-versus-ally battle … As a bicyclist, I am constantly on the lookout for oncoming buses even when I’m in a bike lane. As a transit rider, the mere seconds delay to wait for a biker can cause my bus to miss a traffic signal, which can cause me to miss my transfer, which can cause me to arrive 15 minutes late to work on the day where a coworker brought in Mel-O-Glaze Donuts, which can then cause me to be donut-less for the whole morning. Like, I said, none of this is good.

This came across my email just as I'd finished a meeting about a bike vs bus lane problem on Auckland's Karangahape Road.  The interaction of curb-running bicycles and bus stops is a problem on every continent and island, because it's a geometry problem.

And that means, chill!  Obviously, we push back on anyone who says that either bikes or buses are "just more important" than the other; that's just tribalism.  But then you accept the difficulty and the unsatisfactoriness of any compromise, including the one Chris proposes, the "floating bus stop" shown here in an image from the NACTO Street Design Guidelines: 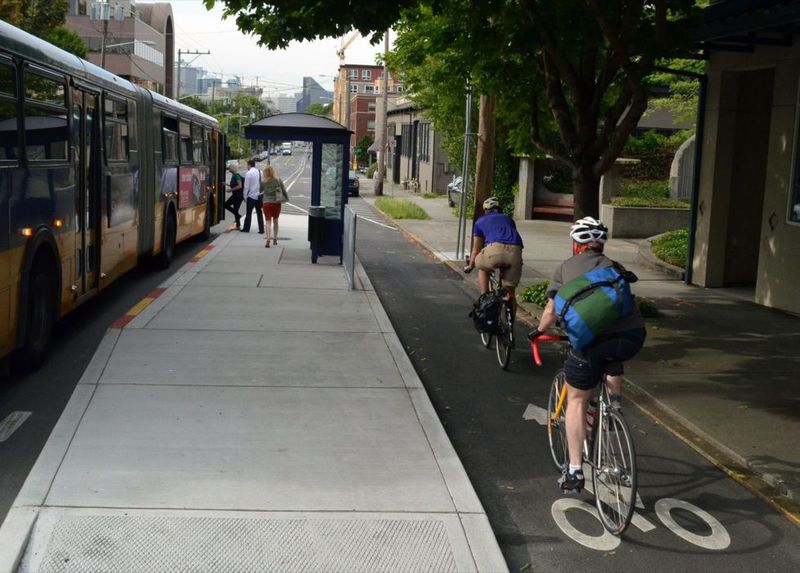 This works fine as long as the bus stop isn't busy, but of course there are likely to be lots of pedestrians crossing the bike lane at the times when the bus is stopped there, so a cyclist's odds of actually passing a stopped bus on the curb side may be limited.  I also prefer "table" or shared space solutions for the bike lane that alert the cyclist to yield to peds in this situation.

Is it perfect?  No, but there isn't a perfect solution.  We know that geometrically, so: chill!

Quote of the week: Yes, there will be jobs!
No, Let’s Not “Uber” Our Bus System

13 Responses to Quote of the week: bike-bus conflicts

You are here: Home › Quote of the week: bike-bus conflicts