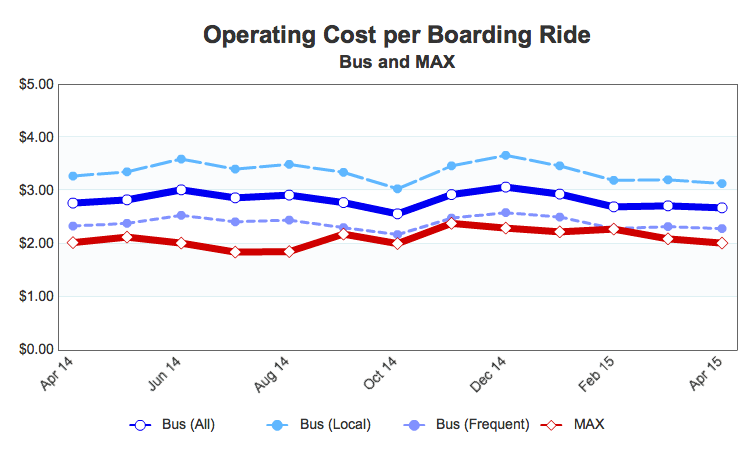 This is a year's trend comparing bus and light rail (MAX) service in Portland's transit agency, TriMet, from the performance dashboard at the TriMet Transparency and Accountability Center webpage.

The metric here is operating cost per boarding ride.  This is a good overall measure of how effectively a transit agency is liberating and moving people, where down means good.  (I prefer this ratio upside down: ridership per unit cost or "bang for buck," so that up means good. but this is obviously a chart by finance people who always want cost on top.)  This is a "macro" metric.  Practically everything a transit agency does affects it, so it's lousy diagnosis but not bad if you only have bandwidth to convey one measure.

Most American transit data just compares bus and rail, and inevitably shows bus performing worse.  You'll see that here too if you just look at the wide solid lines.  From this we get endless ignorant journalism lamenting the poor performance of the city bus, as though all city buses are basically alike.

What if we separated out highly useful and liberating bus service as a separate category?  That isn't exactly the distinction made here but it's close.  TriMet's Frequent Service network (still being restored, but mostly now back in existence) is the network of all services that are almost always coming soon.

The lesson is pretty clear:  The "city bus" is a misleading category, and the much-fetishized difference between bus and rail may matter less than whether the services are designed to be useful.  And when it comes to usefulness, no one variable capture that more than frequency.

How do the network changes affect your trip?
Do you want me involved in your city’s transit planning?