Here's a great way to help people understand how a transit service change or project will affect them.

Houston METRO has released a new tool to help people understand the upcoming major changes to the city's transit system. It puts two trip planners side-by-side: one routing via routes in the existing network, the other via the routes of the New Bus Network. 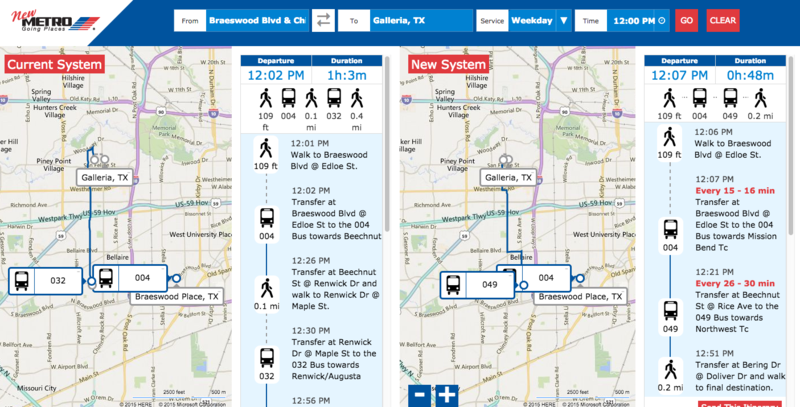 Houston's transit network is about to change dramatically, and everyone is going to have to learn how to use the new one.This lets anybody quickly compare different trips trips to see both how a trip will go in the new system, and how long it will take.  It could be a great educational tool in the public consultation phase, not just when implementation is occurring.

It can also make the tradeoffs implied in the system redesign explicit. For example, in the trip above, a grid movement in southeast Houston is now much faster due to the reduced waiting times on frequent network routes in the area. Other transit systems implementing major changes would do well to build similar apps.

However, while the dual trip planner is great for understanding how the changes effect specific trips, it is less useful for developing a sense of how the overall mobility level changes across the city with the new network. As an extension of this same idea, a companion tool could be developed that would compare the transit isochrones of different points in Houston in the existing and new networks. Not only would a person be able to understand how specific trips from one point to another change, but how the area of the city (and all of the opportunities located within it) accessible by transit changes as well.

3 Responses to How do the network changes affect your trip?

You are here: Home › How do the network changes affect your trip?