Evan Landman is an associate at my firm, Jarrett Walker & Associates, and serves as a research assistant and ghostwriter on this blog. He tweets on transit and other Portland topics at @evanlandman.

For years on this blog and in our projects, we've stressed the importance of highlighting and emphasizing transit agencies' Frequent Networks on customer information of all kinds.  Portland's agency TriMet has traditionally been a best practice example here, given their extensive Frequent Network branding down to the individual stop level, but curiously, their system map has not embraced this idea so wholeheartedly. Today, TriMet's new system map changes that, introducing a cleaner, more readable map, which does a much better job of highlighting the agency's premier bus services.

Let's compare the two, starting with the old map that has just been retired: 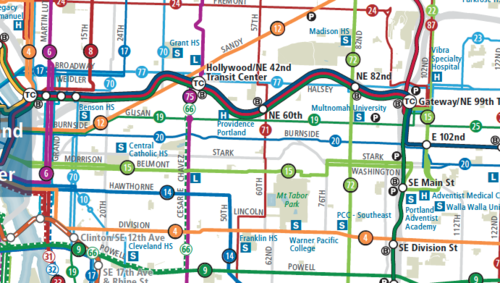 This Southeast Portland shows the core of the city's Frequent Network. The Frequent Network is symbolized with a thicker line weight, but every line still has its own individual color, presumably to make it easier to trace each individual line across the network. However, the effect of this choice distracts from the important information contained in the line weight property, because the wide diversity of bright colors climbs to the top of the visual hierarchy, though the colors communicate nothing about the nature of the service on each line.

The legibility of the map is not aided by the large number of points of interest shown, with both text and symbols frequent overlapping the most important features (the transit routes). TriMet's old map was certainly not a bad transit map by any means, and deserves enormous credit for being one of the first to explicitly show frequency at all, but in the years since, many of TriMet's peer agencies around the country have focused even more heavily on frequency to produce truly useful and innovative maps.

Now compare the image above with the same area of the new map: 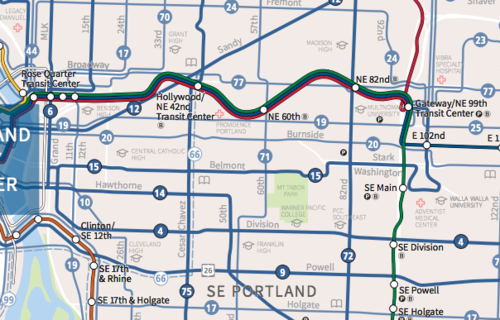 Portland Central Eastside, TriMet map (late 2015)
This is a map that truly focuses on communicating the usefulness of the transit routes. The most important factor for usefulness is frequency, which is obscured when every line on the map is the same color, or a different color, or colored by a less important attribute, like which corner of the city it serves.
Here, weight and color are both deployed to differentiate the Frequent Network (heavy, dark blue) from other less frequent routes, but without the riot of color of the older map. When we compare the legends of each, the difference is subtle, but the when deployed on the map, the difference is dramatic.

This new map makes one thing very apparent: anywhere near a thick, dark blue line, a bus is always coming soon.
It is also a clearer, more traceable map! Where the old version employed the common convention of using color to distinguish routes and make it easy to tell where they travel across the city, the new map uses line displacement and simplification in a much more sophisticated manner to accomplish the same task.
For example, examine the path of the 10-Harold: on the old map, its line appears to end at Hawthorne and 12th, where it joins the 14-Hawthorne to head into downtown (it's actually beneath the 14's line, if you look closely). With the new map, it is much clearer that this route overlaps with the 14 in this segment, just by the way in which the two lines have been separated from one another. Now that color is now longer necessary to distinguish each route, it can be used for a more important purpose: showing frequency.
Apart from the increased focus on frequency, this map also succeeds by reducing the amount of non-transit information, with fewer points of interest labeled. Those that are present have symbols and labels drawn with a brown color much closer to that of the map's background, reducing the effect of collisions with transit features, and diminishing the level of visual "noise" competing with the transit network structure for the reader's attention.
It's fantastic to see an agency like TriMet continuing to work to improve its customer information. Even in the age of real-time data and mobile trip planning, a transit agency's map is often the only place where the entire system is documented in a way that an average person can understand. City transit networks are complex, and the best maps, like TriMet's, are designed to reduce that complexity, focusing on the most important aspects of the service for the people who ride it.