The main Los Angeles County transit agency, Metro, has released a set of “Blue Ribbon Committee” recommendations that show the agency trying to find its way toward higher ridership with the limits of its operating budget.  These are not yet Metro’s recommendations to the pubilc; the agency is still thinking about them, but they are out there for public discussion.  The main presentation of them is a PowerPoint, not all of which may be easy for the average person to follow, but here are the big important points.

(Full disclosure: I have advised Metro in the past on strategic bus network planning, but I was not involved in this process and have no contract with them now.)

The proposal would do one really important thing, and would also do two controversial things to pay for it.

The important thing is to expand the Frequent bus network.  Frequent service means that service is coming soon, all day; the specific definition at Metro is service every 15 minutes or better.  Frequency is the essence of freedom and spontaneity for transit users, and it’s also essential for people with busy complex lives, which is true of many people across the income spectrum.  Finally, frequency is essential if you’re going to connect from one transit service to another, which is essential for getting where you’re going in a city like LA where there are many destinations, not just one downtown.  High frequency, in places of high demand, leads to high ridership. 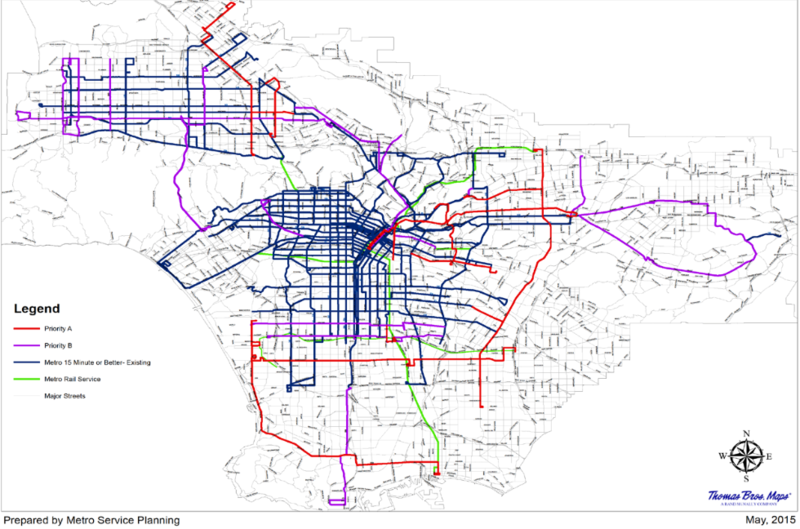 This expansion looks like it’s all about affordability and opportunity.  The focus is on South LA, some of the South Bay, the San Fernando Valley, and the San Gabriel Valley.   These are areas with relatively affordable housing, but they are often far from concentrations of jobs and opportunity.  People are moving to these areas in search of affordable housing, but transport must also be affordable. Expanding frequent service in these areas means that lots of low- to moderate-income people will have less need to own cars, because more jobs and opportunities will be readily available by transit.  That benefits everyone.

What are the tradeoffs?

First, the proposal suggests reductions to low-ridership coverage services.  These services run in areas where demand is predictably low due to land use factors such as low density or walkability.  People will be angry about these service reductions, but Metro is saying, in effect, that it has to focus its limited resources on areas of higher ridership potential.  One possibility in Los Angeles is that local city governments can choose to run some of these services themselves; many already have municipal transit systems.

This will be very controversial because on the surface it sounds horrible, and it’s hard to explain.  But it’s not that bad, and the tradeoff is a real one.

Metro, like most crowded transit systems, has a standard for how crowded buses can be allowed to get before they add another bus.  These standards accept lower levels of crowding than many of their peer agencies, such as New York and Chicago do.  That sounds nice for passengers, but it’s very expensive, which is why many other needed services in Los Angeles don’t exist.  These standards require Metro to pull out additional buses for short periods of peak demand, and remember, this service is expensive because (a) you have to pay drivers more to work very short shifts and (b) the number of buses an agency must buy, store and maintain is based on the peak demand, not the all day demand.*

So smart transit agencies, facing the growth of all-day demand that is easier to serve cost-effectively, are questioning every peak bus, and making sure that the demand for that bus justifies the high cost of peak only service.  That’s the context in which this has to be understood.  So the talking point is this:

More crowded buses!  A sympathetic person unhappy about losing service!  It will be easy for the media to make this proposal sound terrible.  But to me, this proposal is exactly what you should expect a transit agency to do, if you tell it serve more people without more money.

*  There’s further reason for optimism about crowding, but it’s so geeky that I thought I should leave it to a footnote.  Here goes:  Metro staff have advised me that they think this change in loading standards will have little noticeable impact because they are also changing some details about range of  situations over which they average to calculate that load.  The proposed change focuses the calculation more narrowly on trips that are  likely to be crowded.  This narrows the range of variation between loads on different trips, which reduces the difference between the average load — which is all a standard can discuss — and the apocalyptic worst case load, which is what everyone remembers and tweets about.  This means that a higher average load doesn’t necessarily mean that worst cases get any worse, or even become much more common.  They will still happen, and everyone will tweet about them when they occur.