Posted on October 13, 2015 in Postcards, Reykjavík

Part 1 of this post gave an urbanist tour of Reykjavík, with photos.

Iceland has no rail infrastructure.  Public transit is buses, but they’re nice buses, as is usual in Europe.  They blanket most of the city at a 30-minute frequency (blue below) but only two lines – linking the historic town centers, rise to 15-minute all-day frequency (red).  These are the only places where the next bus is “always coming soon.”  Here’s the frequency map we drew for them (full PDF here: Download Frequency Map): 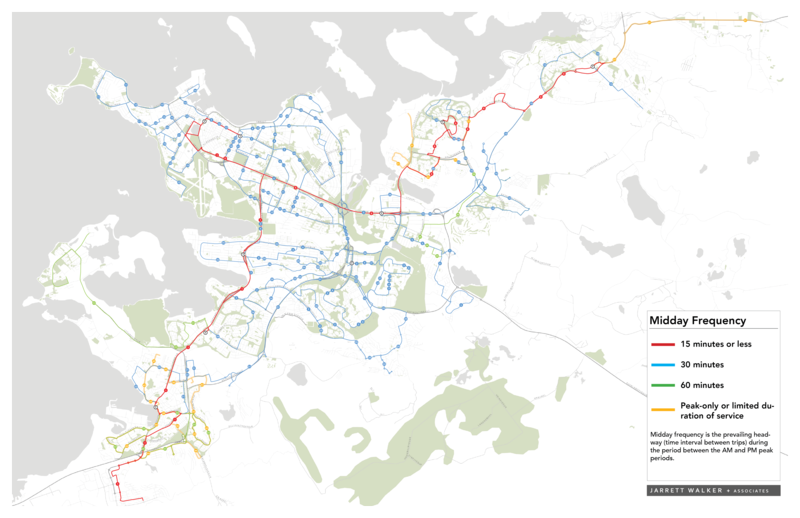 Given the density, that’s not much frequency.  There are probably more opportunities to build high-frequency corridors that dramatically expand transit’s usefulness.

My main tasks were to run a two-day transit planning workshop for municipal and national planning staff, to give a public lecture, and also to do a briefing for elected officials.  In all, I said some of the things I say anywhere:  Don’t get distracted by the merchants of any transit technology, or their appeals to your supposed envy of other cities and countries.  Instead, think about human beings, their liberty and opportunity, and build a transportation system that fosters that.

Iceland’s most interesting challenge is that it’s a small country at a time when we’re all supposed to worship bigness, so it probably takes some effort for Icelanders to stay focused on solutions that suit their scale.  Iceland’s population is only about 330,000, of which 2/3 are in greater Reykjavik.  If it were in the EU, Iceland would be the smallest member by population, smaller than Malta and certainly smaller than giant Luxembourg.

What’s more, Iceland’s population is small for good reasons, mostly limitations of land, sunlight, and climate.  For most of Icelandic history, fish has been the only abundant food resource, but today even that is in need of management.  Agriculture so close to the Arctic Circle will always face limits even if much of the soil hadn’t washed away — the result of medieval Norse colonists cutting the ancient birch forests faster than they could regenerate.  Today, Iceland is a world leader in the sustainable management and restoration of natural resources, but in such a remote and challenging location there’s not much point in growing beyond what the bare land and low-angle sunlight can support.

So one basic challenge for Icelanders is how to listen to all the roving “experts” whose message is just an appeal to presumed feelings of international envy.  “You’re a European capital!,” they say.  “How can you not have streetcars and subways and a ‘high-speed train’ to the airport?”  This peer-pressure is supposed to overrule all the facts of Iceland’s own geography and situation.  You might as well tell Reykjavík that “real European capitals” need medieval and Renaissance buildings, even though there wasn’t a town here until the 1700s.

One expert was quoted to me as saying: “You won’t get business if your downtown isn’t 20 minutes from the airport by rail.”  This rule is apparently indifferent to how far away the airport is (50 km!), or how small the metro area is (220,000).  The rule’s reference to in-train travel time but not frequency also reveals that it’s addressed to people who don’t understand public transit very well yet.  Those who do need to know the frequency, not just the in-train travel time, before they know how useful a service will be.

These abstract, envy-based rules are always the death of public transit.  They also imply that no other feature of a place could possibly compensate for the failure to satisfy – that nobody would come to Iceland because they want what only Iceland has to offer.

The Icelanders I met, for the most part, seem wise to this, perhaps partly because Iceland is doing well.  By most standards the country is wealthy, stable, educated, safe, and (apart from some former bankers) well-liked on the global stage.  So I expect Icelanders are capable of looking overseas with curiosity but not with envy or fear, and of making their own decisions about what kind of major city they want, and what they want to offer the world.

Reykjavík: Adventures in Subarctic Urbanism (Part 1: the Photos)
Seattle: Before the Live Debate, the Written One (and an Imptertinent Question)

One Response to Reykjavík: Adventures in Sub-arctic Urbanism (Part 2: The Words)

You are here: Home › Reykjavík: Adventures in Sub-arctic Urbanism (Part 2: The Words)