Posted on July 8, 2014 in Information Requests

For a client in the Middle East, we are looking for good examples of this situation: 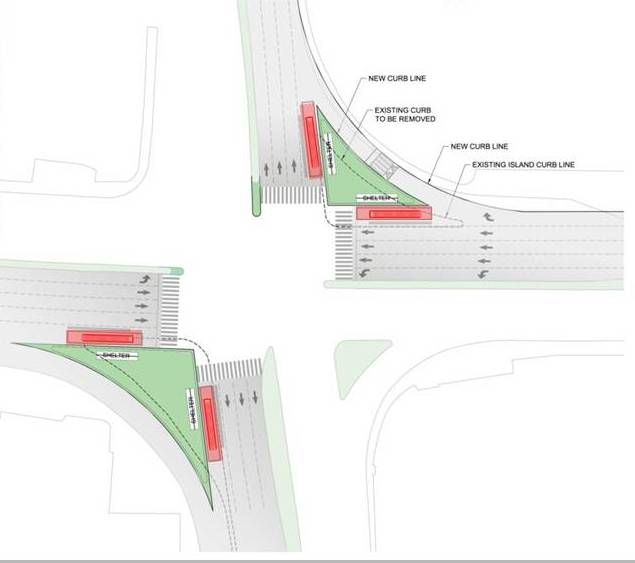 Two high speed streets intersect, and the intersection features sliplanes (shortcuts for right turns) which in turn create islands (in green above).  The islands are big enough that bus stops can be placed on the island.  Transit lines run east-west and north-south (not turning at this intersection.)

One bus stop on an island like this is common enough, but I'd like to find examples of the situation above, where two intersecting bus lines stop on the same island — one nearside, the other farside — so that the island becomes a very easy transfer point, at least if you're travelling (in this drawing) between points west and points south, or between points east and points north.

If you've seen this arrangement, please leave a comment!  Thanks!

Posted on October 17, 2012 in Information Requests

This question for transit agencies that run high volumes of bus service into a crowded CBD (i.e. downtown) where bus operations are difficult and space limited.  If you know someone at your transit agency who probably has this information, please forward a link to them.

Both numbers would be helpful to me in establishing baseline expectations for what degree of loading is reasonable to assume, for the purposes of sizing a long-term radial bus need into a big CBD.

So you’re designing a new rail line, which will require bus connections at many points.  These bus lines are important.  They extend the reach of the rail line, and they are fundamental to how everything fits together as a complete network that anyone can use.

On some parts of the alignment, it appears logical that many bus lines will terminate at a rail station.  This means that they will need to lay over — sit for a while so that drivers can have breaks — and that takes space.  You also want your rail stations to be vibrant urban places, so redevelopment needs are likely to conflict with bus layover needs for urban space, and it’s obvious which one will excite politicians and citizens more.

Yet the layover is essential.  If it’s not there, buses have to drive further to get to other layover locations somewhere beyond the station, and all that time is money out of the operating budget, that comes at the expense of service that customers can actually use.

The critical problem is how to estimate long-term layover needs.  At many agencies, operational service planners who spend almost all their time working in a 1-5 year timeframe are suddenly asked how many layover bays they will need for a project that opens ten years from now and needs to function for 50 years after that.  Obviously, they have no clue.  They have a sense of how the logic of the network tends to cause lines to converge at a station or not, but they can’t guess how high demand will be in 40 years, or even what the size and shape of the buses running then will be.  (One reason to expect a renaissance of double deckers is simply the intense presure to conserve curb space while maximizing capacity — a big problem for the double-decker’s competitor, the articulated bus.)

So faced with all that uncertainty, all planning staff can do is guess very high about how much space they’ll need, which amplifies the conflict with other development — and also with project construction cost.  In the worst case, the estimated layover need conflicts so dramatically with everyone else’s needs that they get ignored.

The conflict is totally understandable from everyone’s point of view.

Has any agency solved this problem to everyone’s satisfaction?

I’m pretty sure the answer is no, but would love to see some inspiring stories about how you’ve gotten close.

We'll be in Hong Kong Sep 9-11; remarkably, it will be my first visit.

As you'd expect, I jumped onto Google looking for hotels that would be convenient to the rail line from the airport.  Yikes! 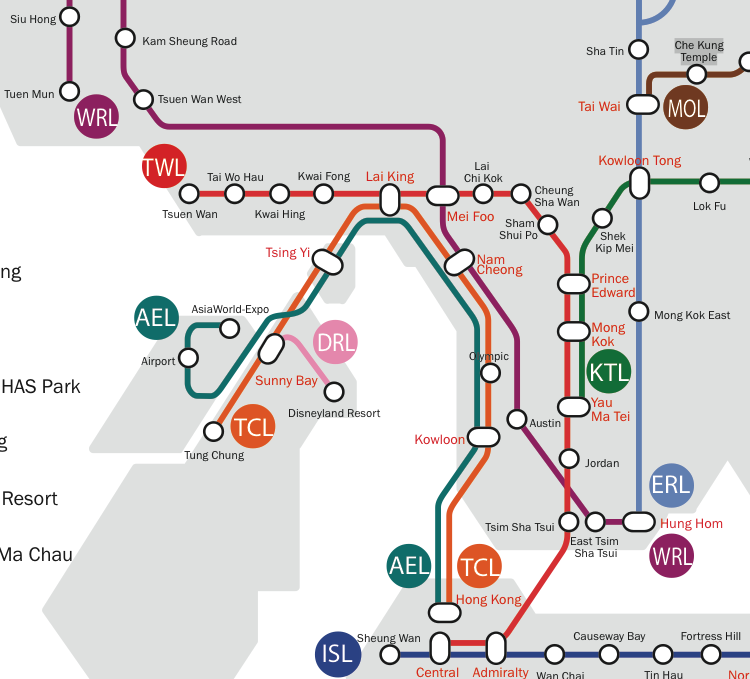 That's the airport on the far left, on the Airport Express Line (AEL).

Hong Kong boosters, help me out here.  Is it my imagination, or am I seeing that:

Don't airport lines, where people are hauling luggage, need to be designed so that they plug into the network with relatively few, well-designed transfers.  As readers if this blog know, zero transfers is unrealistic and sometimes you even need two to get to remote corners of the network.  But five?

Of course the answer may be that the metro doesn't want to compete for airport trips.  Are there other options I should use if I want to stay in, say, central Kowloon (three transfers!)?

So back to my travel needs.

Comment moderation is off.  Feel free to chat among yourselves about this.

The image below, of Sydney's M2 freeway at Barclay Road, shows the two directions of a median busway crossing over each other so that buses can stop on a center platform — without the buses needing to have doors on both sides. 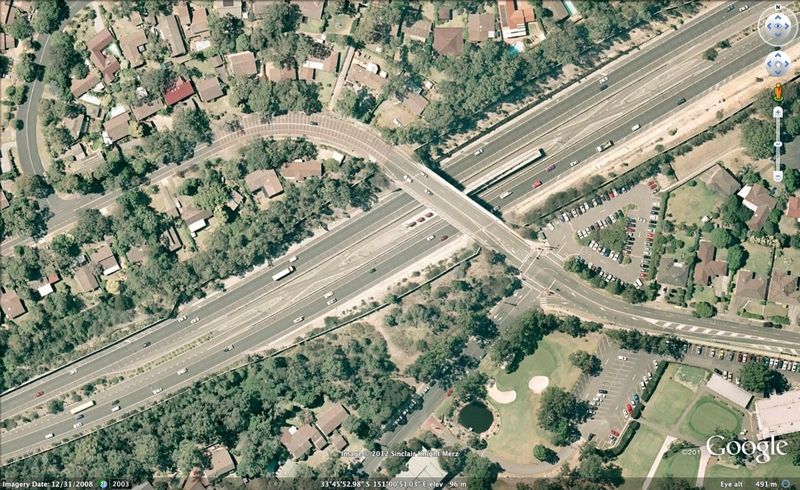 Another I'm familiar with is on the Los Angeles Harbor Transitway at I-105.  The station is buried under a freeway interchange but the crossovers on the north-south busway are clearly visible. 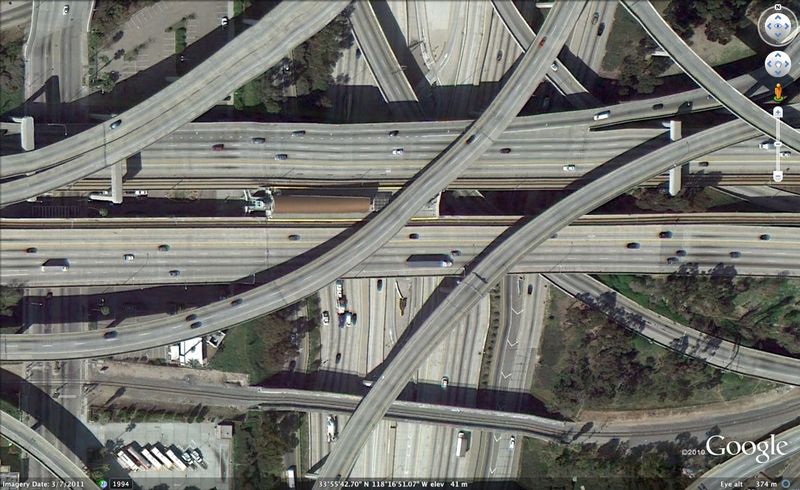 Can anyone identify other examples of this design in busways anywhere in the world?  Please reply in comments if so.  Thanks!

Posted on March 1, 2012 in Information Requests

Three of my clients are in need numerous examples of bus stops on diamond freeway interchanges.  (I have a few, but need lots.)  Diamond interchanges look like this: 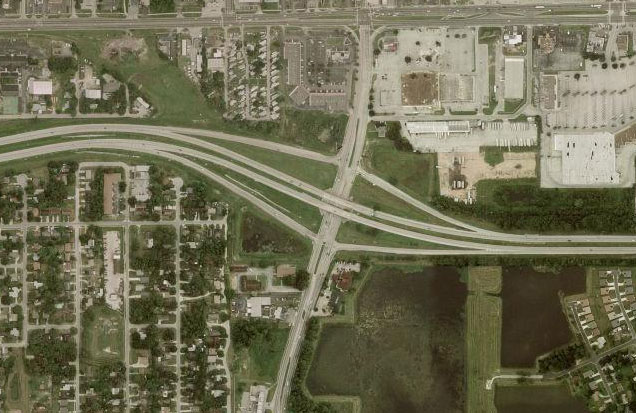 We're interested in cases where a bus line runs along the freeway and serves the area by:

We'd especially like to see examples where the intersecting local street has its own bus route flowing through, and people can connect to the freeway service here.  This provides good examples of stop placement and resolutions of the conflict between pedestrian and car needs in this context.

If you can think of an example, please just comment with the city and the names of the intersecting roads.  I'll take it from there.

Posted on February 29, 2012 in Information Requests

Last week I posted on the odd phenomenon of one-way splits, where the two directions of transit service are moved some distance apart.  My point was that it's a great example of symbolic transit, in that the lines appear to cover more area, in a way that looks nice to developers, but they actually cover less, if you define "cover" as "being within walking distance of both directions of service."  If we assume an acceptable walk to be, say, 400m, then as you can see in the diagram below, the area within walking distance of both directions of service (blue in these diagrams) shrinks as the separation gets larger.

Most commenters agreed, but there was an interesting dissent.

The post is misleading. It makes more sense to calculate the round-trip walking distance, in which case the areas covered in blue would be the same.

As I understand it, this commenter thought I should draw the situation this way: 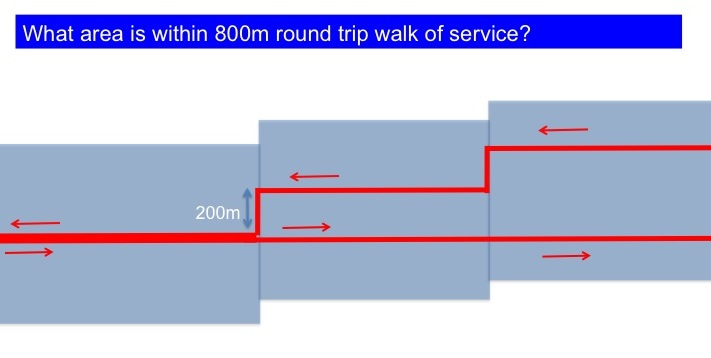 I have to admit I had never heard this definition of coverage before.  It implies that if we have to walk 800m to the bus in the morning but 0m to return in the afternoon, we're within a acceptable 400m walk.

What do you think?

We're looking for case studies in which:

If anyone's familiar with cases, or with studies of this issue, please let me know.  Thanks! 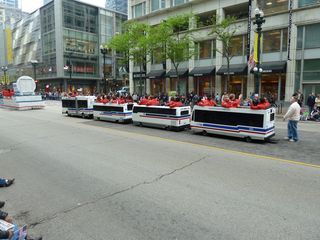 Most cities that I know have one or more major downtown streets where parades and other major civic celebrations tend to occur.  San Francisco's Market Street, Chicago's State Street (pictured), and New York's Fifth Avenue are obvious examples.

These same cities, if they value transit, often want this same street to be the core of their transit system, because they want transit to deliver customers to the "front door" of the city.

So it's normal to see huge, complex reroutings of transit service when one of the civic events is happening.  The legibility problems of this shift are accepted because they happen only a few times a year.

Vancouver, however, does something different, and I want to verify how unusual it is.  Vancouver's core downtown transit street, Granville Mall, is closed to buses (and all vehicles) every weekend evening.  Specifically:

On Fridays, Saturdays, Sundays, Holidays and the day before a Holiday, buses will run along Granville each day until 9pm, then switch to the re-route, travelling northbound on Seymour and southbound on Howe. The re-routes will stay in place until the close of service.

So many of Vancouver's most important street-running transit lines (mostly trolley buses in this case) shift from one downtown street to another at 9pm on almost half of all days.  So the process of explaining and remembering where to find the bus is complicated all the time, which is quite different from finding the street closed for a very rare parade.

What North American cities do this routinely with their main transit street?  Nicollet Mall in Minneapolis is the only example that comes to my mind, but its role in the transit network is much less important than Granville's.

To be clear, I'm not interested in reopening the Granville Mall debate, where many advocated closing the street to buses entirely.  I am interested in the precedent as it might apply to other important transit streets, in Vancouver or elsewhere.

If you're a talented illustrator who's willing to volunteer a few hours in return for a possible publication credit, read on.

My book Human Transit, which I hope will come out by November, needs some ideas for a cover.  The publisher has developed one that has promise but would like to see some alternatives.

The visual message of the cover must be:

The cover text is:

(I like this "four-line poem" layout, but it can be in any configuration.)

All this text must be clearly legible on the cover, though the subtitle should be smaller than the rest.

The cover dimensions are 6×9 inches.

If you provide the image that becomes the basis for the selected cover, you'll be credited on the title page.  Please note, however, that I'm not running a contest, just welcoming ideas from anyone who wants to share them.  The final decision about the cover will be made by the publisher.

Please pass this on to graphic artists, or aspiring talented ones, that you know!  I would need to see your ideas by July 20 to keep the project moving.