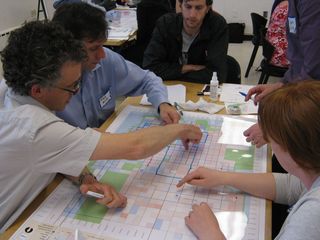 Since I began offering my short course in network design, I've gotten many emails asking whether I'm going to do it again, and in what cities. The answer is that each session of the course needs a local sponsor, and as soon as I hear from one, I'm keen to help make it happen.

To help that process along, I now have a page advertising the course. Please mention it to any organizations that you think should offer it!

If you want to do things with transit, you need to understand some basics about its geometry and costs, facts that may raise interesting questions about your own goals.  END_OF_DOCUMENT_TOKEN_TO_BE_REPLACED

I thought, hey, maybe I should give the 10,000th commenter a prize.  An annual pass for their transit system.  Ten advance copies of my book.  A deluxe vacation for two to the Brisbane busway.

But it's been a couple of hours.  So I think I'll just write the 10,000th comment myself, and save a bundle on prize money!

Really, the great comment strings on this blog keep me going, so keep them coming!

The second birthday of this blog passed unnoticed, especially by me, about two weeks back.  I was jetlagged at the time, so confusion about dates was to be expected.

Things have been a little quiet here as I've moved through a series of location changes while focusing my spare time on the book.  But I'm encouraged by the stats.

At the end of the first year, a year ago, I had written 242 posts, logged 3666 acceptable comments, and about 2000 pageviews per weekday.  Today, those numbers are 585 posts, 9807 acceptable comments, and still in the range of 2000-3000 pageviews per weekday, spiking unpredictably now and then but also crashing predictably every weekend.  So while readership is rather stable, engagement with the material (at least as measured by comments) is accelerating.

The two posts that have gathered the most attention, in links and other citations, are:

Both of these are the opening of long conversations that extend through several linked posts.  Both also feature rich and interesting comment strings.

I'm relieved to say that my book (out this northern fall) will steer firmly away from all the technology wars, though the question of transit's ideal speed, for both efficiency and urban form, does figure prominently.  The nucleus of some chapters is already here in my Basics series of posts.

Per Google Analytics, the total traffic for the last year was:

And everyone loves lists of cities, so the top metro areas in readership for the second year were as follows.  The number is individual visits. 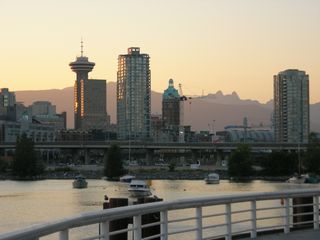 On a per capita basis that's a pretty spectacular result from Canberra (metro area pop. 400,000).  Of course, Sydney, Canberra, and Vancouver are the three cities I've actually lived in during the past year.

The same data broken down by country, for countries with at least 1% of the total:

… the rest mostly smaller European countries and a thin scattering elsewhere in the world.

Thanks to everyone who's been part of this great conversation so far!  This year will bring a number of changes for me, but I'll do my best to keep this going in some form.  And remember, good guest posts are welcome! 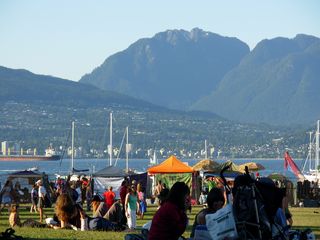 I've just accepted a six-month part-time assignment at Vancouver's transit agency TransLink, to help them with a range of policy and planning issues.  So I'm getting ready to relocate from Sydney to Vancouver.  (As always, you can track my movements under the photo in the next column.)

My assignment at TransLink will be only 60% of fulltime, so I will continue to work part-time through MRCagney, including several projects for clients in Australia/New Zealand.

As always I'm available to provide services on any of the range of issues that this blog covers, including both consulting services and speaking engagements (such as this one).  If I can be useful to your transit agency or consultancy, let's talk.  From April to at least October 2011, travel costs can be figured from a Vancouver base, so North American clients will no longer need to bear costs of bringing me from Australia.

Australia is very hard to leave, but I look forward to being back in Vancouver, working on one of North America's most livable urban areas.

At this stage, I have no clear plan beyond October 2011.  I might return to Australia, or I might settle back in the Northwest or California.  It depends on where it seems I can be most useful.  One clear possibility is to establish a small west coast consulting firm (or join an existing one while it's still small).  But for now, I'm open, and enjoying that.

One of my goals for this year is to connect this blog much more to my professional work as a transit planning and policy consultant.  To that end, I've added a new page outlining my consulting services, aimed at cities worldwide but especially in North America, where I have the longest track record.  If you like what you've read here, and you think your transit agency should talk to me, send them the link!

Life as a blogger on the TypePad platform includes a daily confrontation with this: 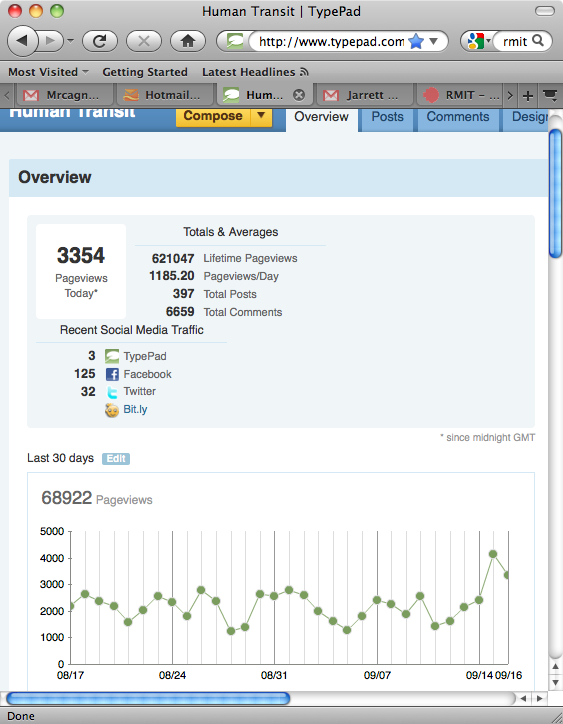 That big bold number is the daily pageviews, since midnight GMT.  (It has not occurred to TypePad that perhaps a rolling total of the last 24 hour period might be more useful.  Instead, I experience the daily crash to zero at 10 AM Sydney time and then a long, slow climb to some unknown summit.)

But then there’s the line graph.  HT has been stable for months now, between 2000 and 3000 pageviews a day except for a weekly trough corresponding to the North American weekend.  This regular weekly low is my best signal that many of you are reading this at work.

But yesterday, clearly, some kind of breakthrough!  A sudden jump to nearly 4000 pageviews.  Was this the well-deserved long-term payoff of weeks of diligent reporting on Frequent Network mapping, and occasional think pieces on big ideas like the perils of average success?  Is it about my forays into urban planning topics like pedestrian malls?  Does it arise from the long investment this blog has made in trying to clarify technology debates?  Does it show the impact of a link from Andrew Sullivan?  Does it even have anything to do with my recent US speaking tour and related videos?

No, it was post about new transit-themed toys by Lego, a post that took me less than 10 minutes to prepare as it was mostly a friend’s email.

Am I focusing on the wrong things in life?

It turns out that the excellent blog Portland Transport created a really clear video of the Portland version of my presentation, “A Field Guide to Transit Quarrels.”  Only tonight have I had both the time and the bandwidth to look at it.  Apart from the well-amplified sniffles from my cold at the time, it looks and sounds pretty good.  Thanks to Bob Richardson and everyone else at Portland Transport who made it happen. END_OF_DOCUMENT_TOKEN_TO_BE_REPLACED

As you know, I tend to write fairly long posts, partly because they’re faster to write than short ones.  If I were writing for print, I’d obviously edit them down a bit.

So it’s with mixed emotions that I announce that you can find me on Twitter as “humantransit.”  I’m not sure I can say anything much in under 140 characters, but we’ll see how it goes.  Quips, at least, should be possible.

Well, my Welcome and Manifesto post is dated 10 April 2009, so I’ve been doing this for a year.

I started this blog to provide a source of commentary about transit planning issues based on two decades of experience in that business.  I had no idea whether the blogosphere wanted such a thing.  I wasn’t sure where it would lead.  I wasn’t sure who the audience would turn out to be. END_OF_DOCUMENT_TOKEN_TO_BE_REPLACED