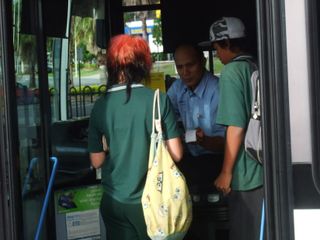 Fares are a tough issue for transit agencies and the politicians they answer to.  Environmentalists and people concerned with social inclusion want fares to be low, or even eliminated entirely.  The financial bottom line of most agencies requires a certain level of fare revenue.  Many agencies worry about their “farebox return” (sometimes opaquely called the “operating ratio”), that is, the percentage of operating cost paid for by fares.  If it’s over 100%, you have a profitable business, but in the developed world it’s usually much less, which is why we have government subsidies.

In this post, I want to focus on fare structures rather than fare levels. You can separate the two issues by thinking in terms of an average fare per passenger that a system needs to collect in order to balance its books.  It may collect this by charging some riders more and other less, but it needs to come out at that point on average.  That’s a fare level.  You can argue that it should be higher or lower overall, but that’s a separate question from fare structure.  Fare structure is about how what you charge to different kinds of people, for different kinds of trips, in order to hit the average fare overall.

For example, there seems to be a fairly broad consensus in most developed countries that there should be discounts for senior citizens, disabled persons, and (in some cases) students.  These discounts need to be offset by charging a slightly above-average fare to everyone else.

But these discounts are the easiest question of fare structure.  The hard questions include:

All of these issues are matters of active debate in the industry, and there are still huge differences from one agency to another.

After dealing with these issues for years as a consultant, I’m beginning to suspect that we might do well to set aside the idea of “fairness” or “equity” in fares.  When we’re talking about fares, everyone wants (a) to pay less and (b) to perceive that the system is fair or equitable. But a simple thought experiment should tell us that we don’t really want fairness at all:

Suppose that in our perfect transit system, a fare policy really did charge everyone for exactly
their fair share of the cost of providing the service that they use.  If you really wanted to do that, you’d do exactly what you’d do if you and a few other people were sharing a ride in a private vehicle.  You’d want everyone to pay the cost of running the trip divided by the number of people riding.

Clearly, your fare would depend on the distance you travel, but it would depend much more dramatically on the number of other passengers on your bus, train, or ferry.  If you were the only passenger on a 40-seat bus, your fare would be 40 times higher than if every seat was filled.  Your fare would be calculated in tiny increments extending from one bus stop or train station to the next.  As the bus or train filled up, the increments would get cheaper.  As it emptied out, their cost would go up.  The sum of all these increments is what you’d pay for the trip.

As fare technology continues to develop, it is not hard to imagine a future very-smart card system that could actually calculate this “perfectly equitable fare” in real time.   It would know not just where you started and ended your trip, but also how many other smart cards were on the same vehicle with you.  At the end of your trip it would debit your card for the cost of each increment of the trip, divided by the number of people who used that increment.

This system, and only this system, could be called “equitable” in the sense that everyone, at every moment, would be paying exactly their fair share of the costs of running their service.


Obviously, no transit agency does anything like this, and I have yet to see it seriously proposed even for the new era of smart-cards.  I don’t propose it myself, but I do think it’s a valid representation of fairness on an analogy to the way we share costs “fairly” among ourselves when sharing some other good, whether it’s a dinner at a restaurant or the fuel costs of a trip we take together.

As a practical policy it would have some bizarre consequences, but perhaps these seem bizarre only because we’re not used to them.  People would stop cursing the transit agency for offering insufficient rush-hour capacity.  Instead, they’d actively try to pack themselves onto already-crowded buses and trains.  At the other extreme, low-ridership services would become prohibitively expensive to ride, so those services would vanish fast.  For better or worse, the policy would certainly yield a very high-ridership transit system, because high-ridership service would be the only service most people could afford to use.

But it would all be perfectly fair, wouldn’t it?

I think this thought experiment tells us several important things:

Equity in the sense of “fair share of cost” is clearly related to how many people are using a given service, yet this enormous factor is almost never expressed in conventional fare structures. It can be crudely approximated, for example by charging more for
services that carry fewer passengers by design, such as Dial-a-Rides and other small-bus services, but this is almost never done in current fare practice.  As noted above, with each
such factor, we increase the equity of a fare structure but also increase its
complexity.

Finally, any fare system that is simpler than the one described above is an extremely crude approximation of equity. Any reasonably simple fare system will be unfair to someone by any commonsense definition of fairness.  Thus, any transit agency that is unprepared to implement “perfectly equitable” fares, as described above, must accept being accused of inequity as an inevitable consequence of whatever decision it makes.  This does not mean that the decision is unimportant or can be taken lightly, but only that we must be realistic about the potential for achieving “equity” in any measurable sense.

UPDATE:  See the comments ection for some great further discussion on this!

24 Responses to Do We Really Want Fares to be “Fair”?

You are here: Home › Do We Really Want Fares to be “Fair”?