Posted on May 19, 2009 in Architecture, Honolulu, Rail Transit, Vancouver 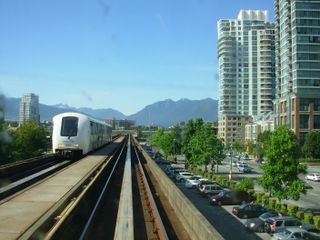 The Transport Politic has an excellent post on the debate over the plan to build Honolulu’s proposed light rail system elevated through downtown, as opposed to at the surface as a group of architects wants.

Everyone is prone to reduce the complexity of urbanism to a problem solvable by their own profession, and risks being dismissive of the expertise of other professions’ points of view.  (See here, for example.)  When a group of architects proposes that a major new transit investment should be made slower and more expensive to operate in order to foster a better streetscape, as is happening in Honolulu, one hopes that they have thought through the urbanist consequences of all the people who’ll be in cars instead of on transit because the transit is too slow, infrequent, and unreliable.  Let me clarify each of those words:

I support the notion that locally-oriented transit systems (such as streetcars and local bus services) should be integrated into the streetscape, because those systems are by definition designed to serve short local trips where station access time is more important than travel time.  Honolulu’s proposed LRT is not such a line.  It is intended for very long trips, and for trips that go across downtown (Airport to Waikiki for example).  If you could find the money, you could follow Vancouver’s example and run the line underground through downtown, but running it on the surface would defeat too much of the purpose of the line.

Yes, Portland’s famous light rail system, MAX, is on-street through downtown.  Does it stimulate the downtown?  You bet it does.  Is it a time-competitive way of making a long trip from one side of the city to the other, say Beaverton to Gateway?  Well, that’s not its strong suit, as the long downtown Portland segment is very slow.  But the important difference with MAX is that it was never designed with an eye toward driverless operation.  It is mostly at-grade all through the system, and will always have drivers, while the Honolulu system is designed to be fully grade-separated, and hence driverless, everywhere.  It’s hard to overstate what a difference this will make to the frequencies the service will be able to offer.

UPDATE:  Welcome, readers from Skyscraperpage.com, where I find this post has been cited as support for an elevated extension of Vancouver’s SkyTrain to the University of British Columbia (UBC).  That’s more than I’m prepared to say.

I will say that I wish they’d call it the Broadway corridor (to emphasize the street it serves) rather than the UBC corridor (which refers only to the endpoint).  From a ridership standpoint, Broadway is by far the densest, most promising transit corridor in Vancouver that still lacks rapid transit.   Like Wilshire Blvd. in Los Angeles, it’s a place where buses in mixed traffic are doing everything such buses can do, and can’t run any more frequently because they would just pile up at the stops.  But I do not mean to imply a position on technology or profile (elevated vs surface vs underground), and am not sufficiently up to date to wade further into that debate at the moment.

Do We Really Want Fares to be “Fair”?
The Joy of High Ceilings (also called Low Floors)

27 Responses to Is Elevated Acceptable?

You are here: Home › Is Elevated Acceptable?